Chapter 2 – Countermeasures are Crafted in Bed

As soon as I returned to my home province, I reported the whole incident to my father and wrote a letter of protest to the king and Baron Nommes.

Apparently, His Majesty the king had already been informed about the commotion in the academy, and immediately sent a letter of apology. Thanks to the proper response of the royal house and the abundant sum included as recompensation, the matter could be considered resolved, for the time being.

On the other hand, Baron Nommes — Selena’s father — apparently was not aware of the relationship between his daughter and the crown prince: the moment he read the letter, he started foaming at the mouth and lost consciousness.

The baron then visited the Maxwell residence and apologized profusely, prostrated on the ground.

He cast away all pride, apologizing while hitting his head on the floor so hard one might worry he was going to open a hole in it. His prostration was so well done, so perfect, that I felt compelled to praise him.

Incidentally, Sullivan and Selena went to visit Lady Marianne after thrusting the cancellation of the engagement on me, as it turns out.

The crown prince started by listing baseless accusations of Lady Marianne’s alleged misconduct: bullying Selena, abusing the authority of her family to control the academy, making secret allegiances with enemy states, and more.

There was no way false charges like that could ever work on Lady Marianne, though.

She shot down all of his arguments and harshly chastised his unfaithfulness instead. Her brilliant counterattack would eventually become a hot topic of discussion among students for a long time.

The final result was that the crown prince bore all responsibility for the events and was demoted in the royal registry from crown prince to vassal.

“He reaped what he sowed alright.”

I was lying on my bed in my home residence as I read the report sent by Luc Efreeta from the capital. All the above information was included in his report.

One month after the abrupt cancellation of my engagement — I had withdrawn from the academy and returned to my home province.

Even if the crown prince took responsibility for the events, I could not prevent other students from looking down on me.

I wasn’t keen on frequenting the academy anyway, so I chose to return to my province and help my father, in order to prepare to succeed him as Margrave.

Now that the situation was over, I could say that the cancellation of the engagement was not a complete loss for house Maxwell.

We had received an abundant sum from the royal house as compensation, house Nommes returned the sum we had offered in advance as financial aid in view of my marriage with Selena, and we also raised the interest rates of the debts they owed to the Maxwell house.

“For me, the best outcome is not having to marry Selena, though.”

“Oh my, you did not like Lady Selena, my lord?”

The question came from the woman lying in bed next to me.

The name of the disrobed lady was Eliza. She was the daughter of a house that served the Maxwells for generations and was also in charge of my education ever since I was small. 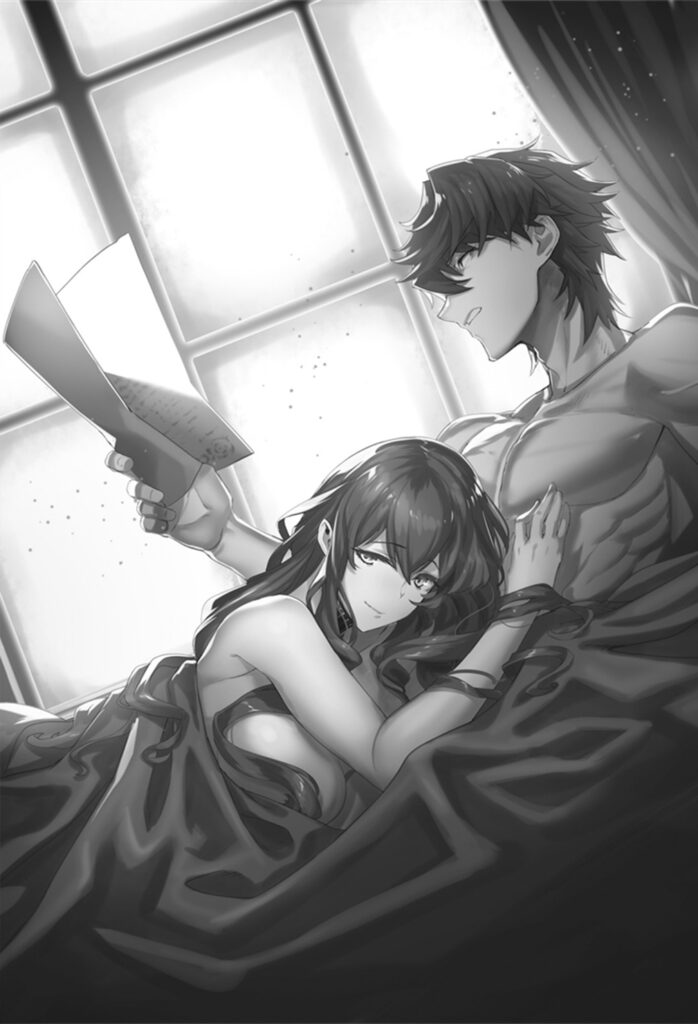 Eliza, who was five years older than me, was now lying with her head on my chest, exhibiting most of her naked figure, which only grew in sensuality over the years, as she peeked at the document I was reading.

“She was pretty cute, so I did want to make her a woman myself…but she was more trouble than she was worth. She was always a crybaby, definitely too weak to become the wife of a house in the border provinces. It might have been fun to bully her a bit though.”

“How cruel…I certainly didn’t raise you like that, young master.”

“You most certainly have. It was you who taught me what I know about women.”

The relationship between Eliza and me began five years ago, after my first battle.

I experienced my first real combat and achieved my first victories. Unable to suppress the excitement after our triumphant return, I gave into my instincts and assaulted Eliza.

She pushed back at first, but ultimately accepted my advances: I thus had my first experience at the age of thirteen.

Our relationship continued since then: whenever I was back in my residence, we would sleep together almost every night.

“Oh, young master…to think you were so cute once. What a devil of a man you have become…as your tutor, I feel responsible.”

“What? I’ve become a healthy and vigorous young man, as you can see, so you should feel proud instead.”

I laughed wryly and shrugged.

I wasn’t the only one to grow big and strong anyway — so I thought while gazing at Eliza’s ample bust.

“It’s a real pity for Baron Nommes, though. Selena and I were both cheating on each other, but because of Sullivan the moron, they received the whole punishment. If they used all my mistresses as the reason for breaking off the engagement, they could have forced us to pay up instead.”

“Maybe they simply do not know of the relationship young master holds with *us*?”

“Hmm…maybe Selena doesn’t, but I doubt the baron doesn’t know anything. I went several times to the red light district in the capital and never did anything to hide it either. It isn’t uncommon for nobles to entertain relationships with multiple women, so maybe he was just pretending not to know…in any case, if Sullivan had at least something resembling a brain, he would have gone to house Nommes first to discuss the matter…and history would have changed.”

“This is my first time hearing about the pleasure district…how cruel you are, telling something like that to me without a shred of apology.”

Eliza pouted and pinched my chest.

Looking at her adorable gesture, in contrast with her mature charm, made me smile.

“I wanted to make you jealous. Men want to see all sorts of expressions from the woman they fell for, you know that.”

“Oh, you make it sound like a nice thing to say…your bad habits with women haven’t changed even in the academy. After all the trouble master went through to register you…”

“Hmph. If he put me in there hoping to fix me, that’d be a real waste. Father must be pretty distressed too, with how things turned out.”

I recalled my father’s reaction when I told him about the engagement cancellation affair and smiled bitterly.

My father, the margrave, had a personality completely different from mine: he was an austere, serious, upright man.

I was prepared to be scolded and preached at for a couple of hours, as it often happened, but after hearing my report, my father reacted in a way I definitely did not expect.

『… just do what you want. I don’t care anymore.』

He then slumped on his chair, as if he was terribly exhausted.

Looking at my father so devastated, even I couldn’t help but feel pain.

Continuing my conversation with Eliza, “In any case…the prince has got to take responsibility for what he’s done.”

“Oh? He was disinherited and demoted to vassal status, was he not? Has he not been punished already?”

Eliza cocked her head to the side, curious.

“Yeah, the royal house has handed out its punishment, but that’s just his responsibility as crown prince, right? He hasn’t paid for humiliating me as a man yet. Nor for insulting the house of Maxwell. He picked a fight with me first: I have a duty to pay him back, till he cries and begs for mercy.”

Sullivan might be finished as a member of the royal family, but that was not enough punishment for that man. Even if he became a marquis or a count, he could still lead a life of freedom and luxury…unless I did something about it.

“He snatched my woman and even dared insult the pride of all soldiers who fight to defend this country, the bastard. I won’t be satisfied untill he fully learns what kind of person he made an enemy of. He had better enjoy the calm before the storm…”

“…you are a man to be feared, young master.”

Eliza then raised her head and kissed me. Our tongues clashed and meshed wildly, then she laid her body over mine.

Thanks to our long relationship, Eliza knew how excited, how frenzied I became before a battle, and how I appeased that drive by seeking female company.

I switched positions with Eliza and hungrily became one with her, making love to her body, which had become much more mature than the first time, five years ago.

In the end, my desire wasn’t satisfied until noon of the following day.

Eliza had gasped, moaned, and shouted through the night, so by the morning she was lying exhausted, unable to move, so I took the newly hired maid who came to announce breakfast was ready and dragged her into the bed.

I listened to her miserable shrieking as I possessed her virgin body, thinking that younger girls weren’t bad either.