The twins were enjoying their rubs together, not periodically leaving anymore, when Roa heard a voice in the distance. A voice he knew.

Roa was undecided about how he should answer. He saw a magic light in the distance, growing closer.

The twins tilted their heads.

“The people that accompanied me in this forest are coming to look for me…but I did something that I shouldn’t have done…ah! No, they’re not bad people! They’re good people!”

The twin wolves grew wary and bared their fangs as Roa talked, so Roa hurriedly stopped them. They were definitely going to fight Nostalgia. Roa somehow succeeded in stopping them, but their ears were vigilantly detecting the voices.

“What do you think I should do…”

Roa started thinking. No matter the reason, he had acted on his own while they were fighting to protect him. It wouldn’t be strange if they didn’t think well of him anymore.

He couldn’t bear to face them.

He thought of running away, but the situation would surely not improve at all.

The golems might not have been completely defeated. Even so, they were looking for him, raising their voices loudly. There was a high possibility that magic beasts attacked them, so he couldn’t just leave them.

Roa made his decision and raised his voice.

The voice returned. After a while, four silhouettes appeared: Nostalgia’s members, with Dietrich in front.

The voice he heard before was Dietrich’s, but Cornelia and Kristoff spoke first. Dietrich glared at him, silently. Behind him, the other three members looked relieved.

Roa stood up and faced Nostalgia straight. The twin wolves at his side were quiet, but their ears were standing straight and wary.

Dietrich approached Roa slowly, a stern expression on his face. It was completely different from the expression he had until moments before.

Roa was punched before he could prepare himself.

Roa did not stumble or fall: he only had a bruise on his lip. That let him know how much Dietrich was holding back.

Roa expected that this would happen, so he held the twins’ scruffs to keep them calm as he bore the pain.

The twins bore their fangs, clearly showing hostility. If Roa didn’t keep them down, they would have already jumped for Dietrich’s throat.

“You idiot!! Drawing the golems away by yourself!? Don’t get cocky!! We were supposed to protect you! Why did you run away from us!? You damn fool!! You didn’t trust us at all!? Do you even know…how much…we worried…? I’m..I’m…never…gonna forgive youuu…!”

Dietrich hugged Roa. Since he was a head taller, Roa’s face was buried in his chest, leaving Roa confused, but he couldn’t break free. Dietrich’s armor hurt too.

When Roa finally managed to take his head out of Dietrich’s arms, along with a faint whining voice, Roa felt a warm liquid falling on his head.

Muffled crying descended from above. Roa did not know what to do. He looked at the other members for help, but they were either smiling wryly or looked exasperated: they clearly had no intention to help.

“…think of it as your punishment. We left it to him, since he said he would scold you properly…but I guess this was expected.”

“…I too wanted to punch you and scold you, but this is just gross…I got over it. The boss isn’t into boys, so don’t worry and enjoy the embrace.”

As Dietrich punched Roa, the twin wolves clearly showed their hostility to him. It wasn’t killing intent, though, but jealousy. They probably couldn’t forgive him for being closer to Roa than them. They didn’t bite, respecting Roa’s wishes, but were quite irritated.

“You did something unforgivable. You know that, right? Even if you did it to save our lives. You didn’t talk with anyone, tricked Bernhart into using magic and acted on your own. If you died and we survived, it would be simply the worst. I don’t know if you thought about it, but we’re not so rotten that we would be glad of being saved by the person we were supposed to protect.”

“No matter what the truth is, others would think of us as despicable adventurers who used their employer as a scapegoat to survive. We would be finished as adventurers. Well, I doubt we would even feel like continuing to be adventurers, so it would be over anyway. Even if you saved our bodies, you were about to kill our “soul” as adventurers.”

In what he thought would be his last moments, Roa felt happy to be able to die as an adventurer. If Nostalgia’s members felt the same, his actions were nothing but humiliating.

Of course, many adventurers used even the dirtiest tricks in order to survive. Roa knew that Nostalgia was different.

“But after that, let me say this. Thank you for trying to save us. Thanks for being alive.”

Roa’s eyes swelled with tears, he was about to apologize…when Dietrich shouted. His arms let go of Roa.

Roa and the other Nostalgia members had no idea what happened. The three adventurers inspected their surroundings, thinking that they were under attack.

Dietrich removed his hands to look at his pants: one side had burn marks, while the other had crumbled into frozen shards. On both sides, the skin under the pants was bright red.

Roa looked at the owners of those paws…the twin wolves, which did not look irritated anymore and were happily wagging their tails.

In response, the twins left Roa’s side and approached Dietrich. Roa and the other Nostalgia members, unaware of what had happened, could only watch.

The twins stood on Dietrich’s right and left side, then pressed on his thighs with their paws!!

The reaction came from Bernhart.

“The red one used fire magic, the blue one ice magic. Incredible magic control! They focused magic only on their paws, not letting it out into the surroundings…the ice magic must feel hot because the temperature is extremely low.”

The twins replied to Roa’s surprise by happily waving the paws which used magic, very proudly.

“So that’s how you defeated the golems! Amazing…”

“Normal fire or ice won’t reach a golem’s core: touching them would let magic propagate directly, that’s how it was possible. Enough physical ability to touch the golems and enough magic control to activate it as soon as they touch them…fantastic!”

“These kids are really something! They’re still children, right? I’ve never seen a magic wolf use magic before!”

Bernhart was especially talkative among the three. It happened whenever the topic was magic, apparently.

Praised by Nostalgia’s three members, the twins jumped around. It was like they were saying “More! More!” with their bodies. 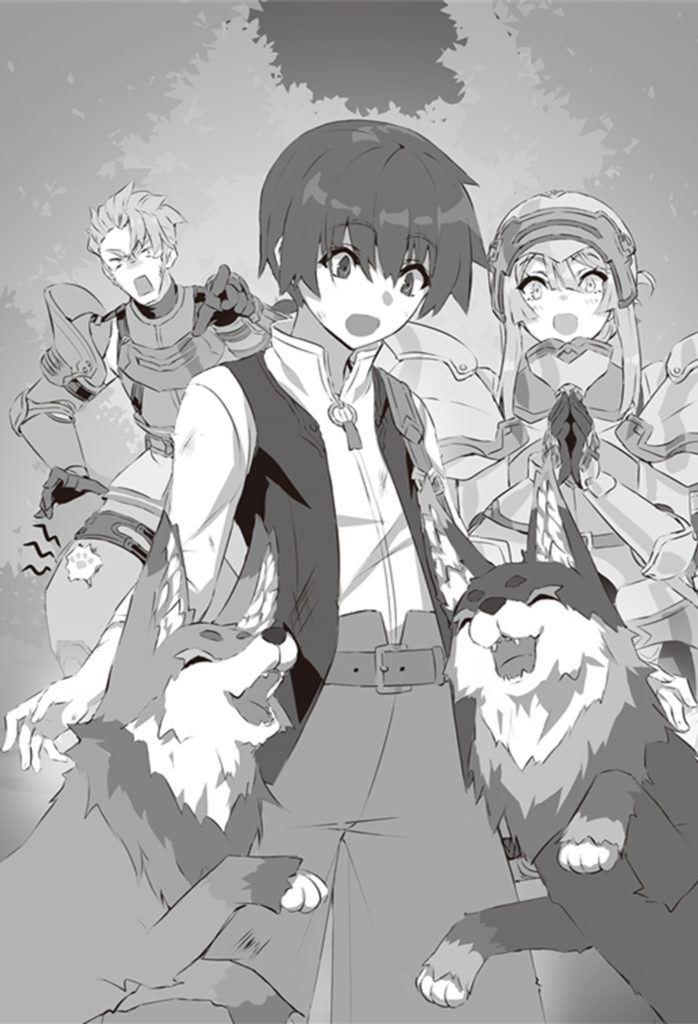 “Um, did everyone see them defeat the golems?”

“Yeah, that’s why we were sure you were still alive and came looking for you. After you ran off taking the golems with you, these two appeared and started chasing after you, taking down the golems on the way. Their fur is a different color than normal, so we realized right away that they are the magic wolves that were always with you.”

“It was really something else! They just touched the golems and they collapsed, just like that! They didn’t even lose speed at all while attacking, running like the wind. I honestly thought I was dreaming.”

“Can you people worry about me a little!?”

Dietrich shouted. He was still crouching, bearing the pain caused by the burning and freezing paws. Since he had also been crying, his face was dirty with tears and snot.

He was in such a sad state, very unfit for a leader’s position, that they just glanced at him, then returned to their conversation.

Nostalgia’s other three party members judged that he would be okay, but Roa realized that Dietrich’s tears and snot probably fell on his head, so he couldn’t bear to keep looking at him.

“…I think they were jealous. It always happens when someone they don’t know becomes friendly with me. They always pull on their clothes or do little pranks.”

“What part of this is a little prank!? It’s going to leave a mark! It’s like I got branded, dammit!”

Only Roa lowered his head, apologizing profusely. Next to him, the twins rubbed their heads against his body, as if urging him to praise them, wagging their tails.

The group had been engaged in a life or death battle until only a short while before, but now the atmosphere was completely peaceful. They could even smile and laugh from the heart.

The forest’s disturbance, however, was not gone yet. The night was still long…

<Why! Why can’t I find him!? Did he leave town? Did he feel such a deep sense of loss? Gaaah, why did he not consult with me? I shall never forgive him!! Never!!>

The gryphon was flying over town, fussing by himself. It did not have the slightest idea what trouble this would cause in the future….