“What are you saying, sir! This town still only exists thanks to your esteemed gryphon! Please do not refuse our banquet of gratitude!!”

<Well! To be thanked so by commoners! I am great, after all! Mwahahaha!>

Grandpa Gry was boasting, proud as ever. Even Roa gave up on calming him down.

Roa’s group was now in a lodging town called Camaro. There, they were invited to join a banquet prepared in the town’s central square. The cause was simple: it was all Grandpa Gry’s doing. Different from usual, the cause was a *good deed* Grandpa Gry did.

“Please, do not worry, and drink up!”

The old man then handed a wooden cup to Roa. Apparently, he was the town’s elder.

After the inspection party entered the town, Roa went to set up camp on its outskirts, since Grandpa Gry was with him. Things might work out with the twins, but it was normally impossible to find lodging that accepted gryphons, so Roa would usually set up camp outside the city while traveling. It was always like this when he was in his former party.

He returned from the entrance gates and started looking for a suitable place, when the old man appeared and more or less dragged him to the city center. The elder then explained excitedly the circumstances, and before Roa realized it a crowd had gathered and started a banquet.

The wooden cup contained a grape-colored liquid and, considering the situation, it certainly wasn’t juice.

Before Roa could do anything to stop it, Grandpa Gry’s beak stretched out, deftly grabbed the wooden cup, raised it and poured its contents in its beak.

“Oh! Esteemed gryphon, I see you enjoy alcohol! Please have some of this too! It is more aged than the one you drank, so it’s a bit stronger!”

<Fuhahaha! What a wonderful town this is!>

“Don’t complain to me if you get a hangover, okay…?” 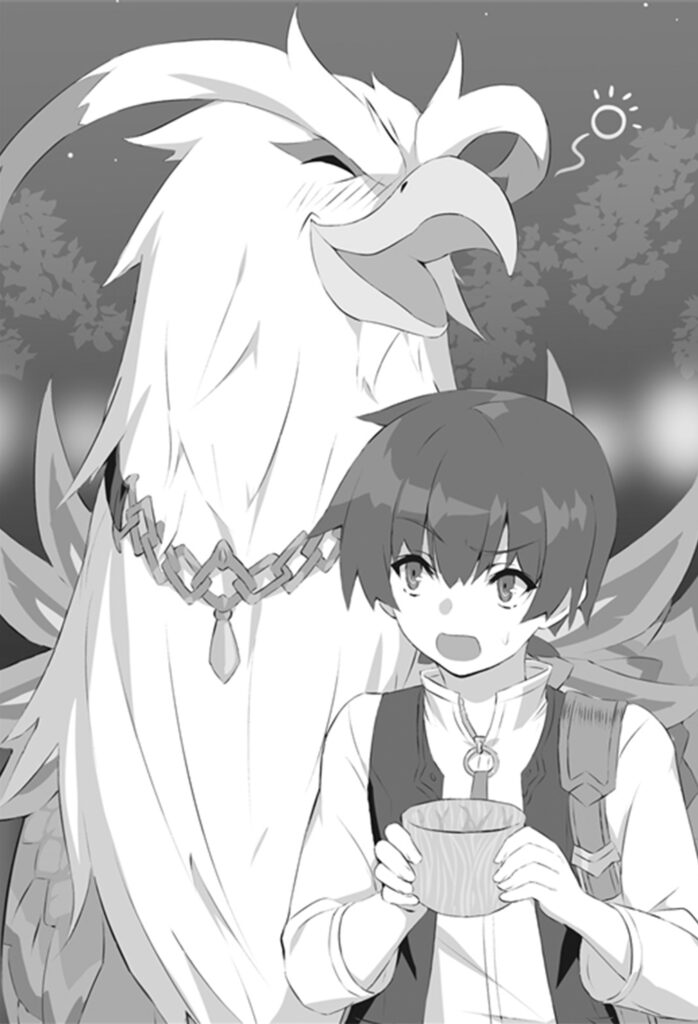 Magic beasts, like humans, got drunk if they indulged too much in alcohol. Then, the next day they would get hangovers. Grandpa Gry did not drink regularly, but it didn’t dislike alcohol: Roa had seen it drink a number of times.

It never got too drunk or had hangovers the next day, but, depending on the situation, it might show unpredictable reactions. Roa was a bit worried, but he looked at Grandpa Gry enjoying itself and the townspeople pouring drinks without showing any fear towards the gryphon.

“This sure is a big crowd…”

Roa looked around and whispered to himself. He then rubbed the backs of the magic wolf twins, who were merrily munching on blocks of meat close to him. They would usually run around and play at times like this, but they understood that Grandpa Gry was the main guest, so they kept quiet.

“Though everyone here is very thankful to your esteemed gryphon, there are nobles staying the night here today so we couldn’t all come. But, those who couldn’t make it feel the same way too.”

The elder gave some fruit juice to Roa instead of the alcoholic drink. Despite the old man’s words, he thought that it was probably an unexpected result of Grandpa Gry doing whatever it pleased as usual, but he didn’t say it outright. It was true that the townspeople had been saved thanks to Grandpa Gry, so he wouldn’t go out of his way to downplay the deed.

People were gathering around Grandpa Gry. Normally, everyone kept a safe distance, but today was different. No one touched it as Roa did, but they happily expressed their thanks, with no sign of fear. They weren’t supposed to be able to talk, but from a distance, it looked like they were talking normally.

Why do the people in this lodging town love and admire Grandpa Gry so much?

It all started during the incident in which monsters overflowed from the dungeon. Count Amadan’s daughter…the inspection party leader and captain of the knights had gone on a rampage, destroying the adventurers’ encirclement, letting magic beasts flee and attack nearby settlements. This town was one of them.

Unfortunately, this town was 2 days travel by horse carriage from Amadan, so the adventurers and the guild, who were in charge of the matter, did not expect the magic beasts to go so far. Because of this no adventurers were dispatched and the town’s guards were only adventurer types retired after taking arrows to their knees, so their fighting power was very limited.

The savior of such a dangerous situation was Grandpa Gry, who was freely roaming the area by itself. Since the battlefield turned chaotic, it was allowed to act on its own. It flew around, without caring for who could see it, and made ample use of the wind magic it usually kept concealed.

For Grandpa Gry, covering a two-day distance by carriage took no time at all. It targeted the places that could provide the most fun and focused on eliminating the magic beasts which fled the farthest.

The town’s citizens, attacked by magic beasts, were almost resigned. That same moment, a gryphon swooped down from the sky and annihilated the invading magic beasts. All the townspeople stated that a bright halo was shining all around it.

Thanks to Grandpa Gry’s timely arrival, the town did not suffer any casualties. Thanks to the potions Roa gave Grandpa Gry to carry, all the wounded were healed as well.

From Grandpa Gry’s standpoint, it only obeyed Roa’s instructions and distributed recovery potions. Many were surprised, however, that a gryphon -a magic beast- distributed potions and healed people. Then, the townspeople saw Grandpa Gry not as an enemy to be feared, but as a gentle-hearted creature that protected them. Thus, in this town, Grandpa Gry was a target of adoration.

In the square where the banquet was held stood a symbolic tree. It was a mushroom camphor tree, characterized by branches spreading like a mushroom cap. It was very useful to take shelter in case of rain, so it was nicknamed the “Traveler’s Tree”.

At the foot of the tree, a small shrine had been built.

Roa looked at what the shrine contained and laughed wryly. It was a gryphon carved out of wood. Technically speaking, it looked rather poor, as if a novice made it, but Roa clearly felt that it had been made in a heartfelt way. Even a master artisan could have failed to put so much passion in it.

In the case of dragons, all dragonkin were the object of worship. Unless they caused direct damage, they were never hunted down, no matter the country.

Roa found it a bit exaggerated to celebrate Grandpa Gry like that, but he was also proud, so he enjoyed the food and drinks too. For a lodging town, they were both of very good quality. He could tell that they were prepared from the heart: the seasoning was a bit too intense for the servant beasts, maybe, but it was okay once in a while.

<Brat!! You have the purification barrier magic tool, right? Let’s give it to them as thanks for the banquet!!>

“Grandpa Gry, you reek of alcohol…”

Roa was enjoying the food when suddenly he found Grandpa Gry’s beak on his shoulder. The gryphon then rubbed its cheek against Roa’s, making purring-like sounds.

A very typical drunk reply. Roa sighed, but Grandpa Gry kept rubbing its body against his. It hurt a little, but in the past, Grandpa Gry played with Roa like this, so it was a bit nostalgic.

The twins too looked disappointed at the drunk Grandpa Gry rubbing against Roa, but the gryphon didn’t even notice. It usually kept its composure before the twins, but it was clearly incapable of self-control right now. At the very least it was having fun and did not have any nasty drunk habits.

Grandpa Gry rubbed its face roughly against Roa, so his hair was caught in the gryphon’s feathers and yanked.

“What will you do with the purification barrier, anyway? It’s not useful in this town, is it?”

<Take it out already.>

Pressured by Grandpa Gry, Roa had no choice but to take the magic tool out of his magic bag. The purification barrier magic tool, originally developed by the church, was not small enough to be carried around. For most of them however, it was just a ploy to hide how they worked.

The purification barrier Roa and the Coralde company made, by estimating how the church’s worked, easily fit in both hands. They tried making it even smaller and succeeded at making one that fit in a palm. In exchange, its magic power had to be refilled often, but if refilled it would last one day, so it was a pretty high-quality item.

This purification barrier magic tool emitted a faint amount of holy light, which purified the surrounding air, but, as Roa said, using it in the lodging town would not have been effective.

Mithril fibers, thinner than human hair, provided magic power from crystals with magic power retaining properties while emitting holy light. It was a simple mechanism. Even if Grandpa Gry modified it, Roa couldn’t think of any other ways to use it.

Grandpa Gry nodded, satisfied, and gently picked up the magic tool with its beak.

“What exactly are you going to do? I don’t think there’s anything you can modify…”

As Grandpa Gry said, the purification barrier magic tool included a spell formula to make it provide magic power for extended time. It wasn’t anything special, though.

<Hmngh? Too many questions, brat, you’re getting annoying! You’ll never be popular with girls that way!>

“I mean, we can’t give them something weird…”

<We won’t. I will just turn this into a device that sounds an alarm whenever magic beasts approach the town. Do you trust me or not?>

Roa looked at the gryphon with suspicion, but Grandpa Gry did not even care as it gleefully returned to the center of the banquet. Thanks to its magic tool gift, the atmosphere became even more excited, so the banquet ended up lasting until late at night.

After Roa explained about the alarm function, the former purification barrier magic tool was placed in the shrine next to the gryphon wooden figurine. This lodging town was located next to a usually peaceful road; the modified magic tool’s new function would activate for the first time 14 years later.

A pack of Forest Wolves left a nearby magic beast forest and happened to find the lodging town Camaro and attacked it. As soon as they did, a deafening alarm sounded and several bolts of lightning struck the pack, burning it to cinders. After the incident, Grandpa Gry was told it all happened because of a miraculous coincidence and felt very concerned. It was a result it didn’t expect either.

That day, Grandpa Gry got so drunk that it completely forgot about the modified magic tool the next day. It didn’t remember what functions were added to the magic tool either.

Because of the purification barrier’s properties, it shouldn’t be possible to add such offensive magic. Even with Grandpa Gry’s skills, to retain magic power for 14 years and even shoot lightning bolts was simply impossible. Or at least it should be.

Grandpa Gry tried researching how such a function could be present, but after exerting too much power the former purification barrier tool had become a charred block too, so there was no inspecting it.

Drunken stupor creates miracles at times. That was the only conclusion available.