Few minutes after they had departed, they spotted a river, and he had Ullr and Kagemaru stop for a break.

He put Hitomin in the river and watched her play happily in it.

“She looks really happy. Maybe I should get in too,” Reito thought. Kagemaru and Ullr were panting by his side.

Both of them had burned a lot of stamina in their race. Kagemaru, running on foot the whole time, was especially burnt out. He took the mask off his mouth and laid down. 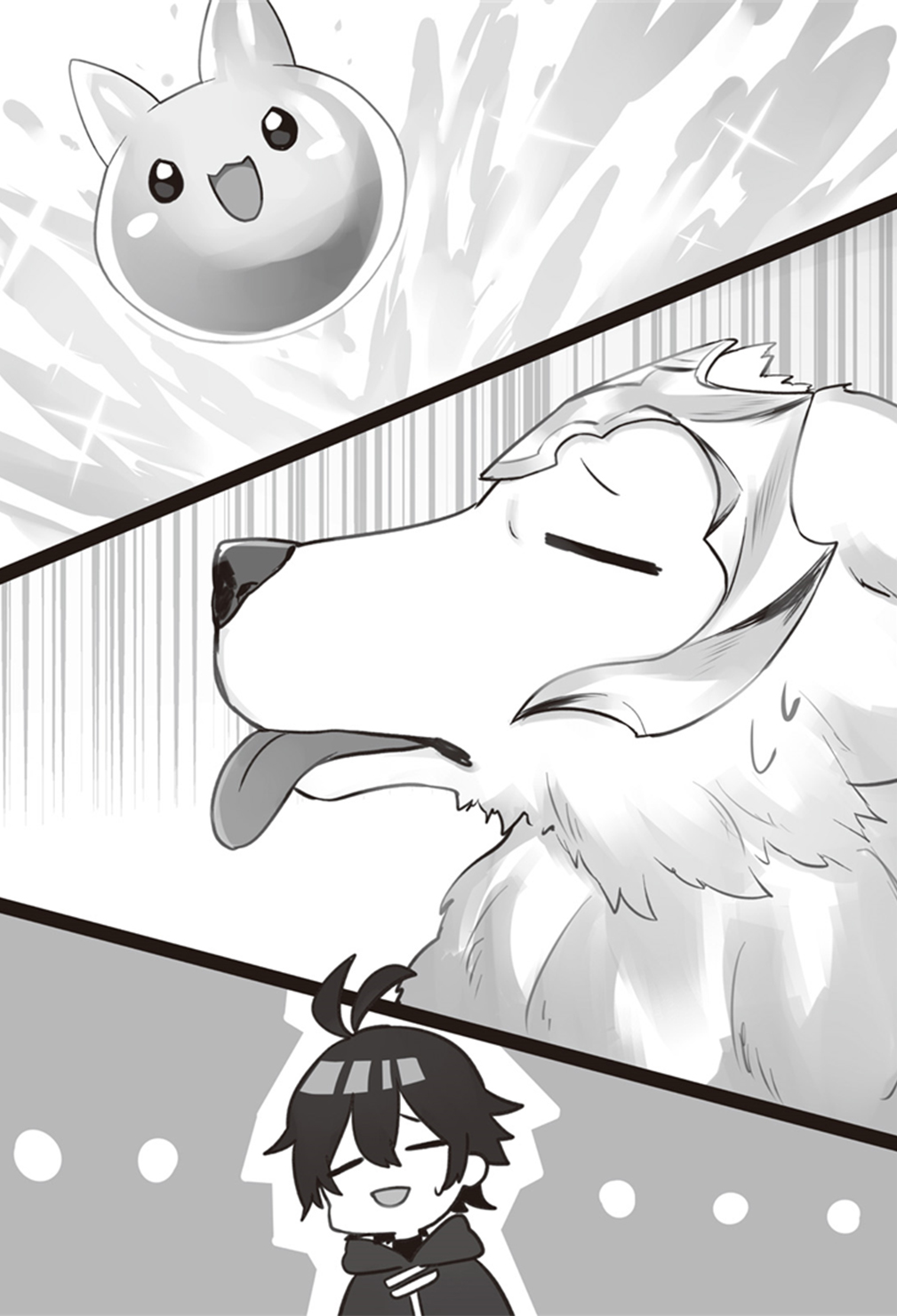 Meanwhile, Ullr was drinking water from the river. As far as endurance goes, he surpassed Kagemaru.

Reito picked up Hitomin, who had her fill of water, and put her on Kagemaru’s head.

“There we go. Show me your body. I’ll use a little recovery magic.”

“Put aside your pride and let’s get started. If I can’t touch your bare skin, the magic won’t work well.”

“I’m sorry… Also, as I aside before, no need to be so polite with me.”

Reito ignored him and used the auxiliary Recovery Magic on him. This magic couldn’t heal large damage, but it could easily heal soreness.

Kagemaru was able to stand and he took some recovery medicine from his pocket and swallowed it.

“Learn from this, and don’t race with Ullr again.”

Kagemaru and Ullr nodded at each other in respect and then shook hands.

The next moment, they were on alert.

To try and find out what was behind the presence, they immediately climb a hill on the other side of the river where it seemed like they could get a good view.

They saw something more horrific than they thought.

They saw an army of countless undead marching through the grasslands. They were mostly goblins, orcs, kobolds, and trolls, but there were also some creatures Reito had never seen before. Further, there was a foul odor drifting through the plains.

Looking at the creepy sight, he was in a cold sweat.

“I can’t believe it… What is this? I didn’t see many of them before.”

Kagemaru was shaken. He had examined things just two days before. In those two days, the Necromancer controlling the Rotten Dragon, Kirau, had used a powerful weapon received from the Empire to put an enormous army of the undead under her control.

“Where is the Rotten Dragon. I can’t see him,” Reito replied.

“He’s not within our sight range. If it’s as big as the report says, we shouldn’t be able to miss him.”

Reito used “Far Sight” and “Observing Eye” to examine the horde of the undead, but he didn’t see anything that looked like the Rotten Dragon.

He was suspicious, but he knew staying there wouldn’t make things turn for the better.

“Let’s get out of here!! We can’t do anything about this by ourselves!!” Reito said.

“You’re right, we should retreat and regroup. I’m sorry… I was flustered.”

Ullr laid on his stomach, and Reito carried Hitomin with him onto Ullr.

Kagemaru, who also didn’t have his full stamina back, hesitated a bit before opting to ride on Ullr.

“It’s fine. Please hold on!! Ullr, get back to everyone at full speed!!”

The magic had increased Ullr’s physical abilities, and so he was able to run at a speed incomparable to that of before.

“Ngh… How is he this fast!? Was he not being serious earlier?”

Reito felt a strange presence creep up behind him.

“Something evil is… coming!!”

When he looked back, he saw a black shadow approaching.

The black shadow and roar got louder as the object became clearer.

It was the Rotten Dragon.

Fortunately, the dragon hadn’t noticed them yet.

Reito could ascertain that there was a living creature riding on the head of the dragon.

Ullr ran off at full speed.