I am told that Logsaria Bornest would be properly put to rest, so I entrusted his body and then headed once more towards the castle, when Feli stopped me.

“If you speak to King Leric, you won’t be able to go back on your word anymore!! If someone not properly trained as Your Highness stands on the battlefield, it will only mean that there will be another corpse to bury…!!”

Feli’s concerns are well-founded. There is no room for objections. Before her, I have never even touched a sword. However, I have something called pride.

Since there is no one else to hear us, I go back to calling her head maid.

“I will never break a promise made on the brink of death. No matter what.”

It was the same in my past life.

On the brink of death. All requests I heard in such circumstances were carried out, none excluded. In a world brimming with death, a true living hell, that was the only human-like way of thinking.

“But only someone with ability could do something like that….!”

“That is right too.”

To fulfill a request received by someone on the brink of death was possible only with enough ability. In Feli’s mind, I have no such power. I did not blame her for thinking so. She was wrong, however.

My words cut off with strange timing.

Fortunately, we are close to the walls that surround the castle. Those who fled the flames of war are sheltered far from here, so there is not a soul in the surroundings. It shouldn’t be a problem to do it here.

“I cannot swing a sword? Has anyone, anywhere, truly said that?”

My mouth bursts open, shattered by laughter. My lips curve in a creepy smile.

The sudden twist in the atmosphere was surely very far from the usual Fay Hanse Diestburg. Feli, initially shocked, finally managed to speak.

“No unnecessary questions. Draw your sword, Feli. That’s the most effective way of proving it to you, isn’t it?”

If correcting a subordinate’s mistake is the superior’s duty, then I must correct Feli’s mistaken assumption. A pitch-black sword appeared in my right hand, as if out of thin air. 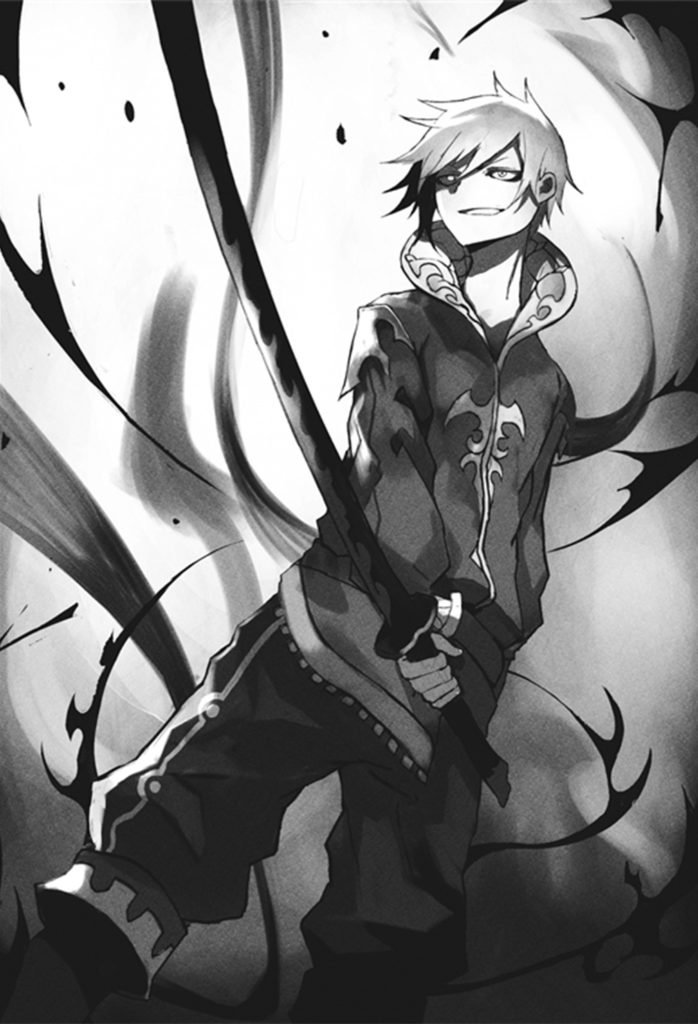 In the world I lived in during my past life, there was no such thing as magic: all abilities exceeding human limits belonged to this category.

A skill that creates a sword from my own shadow. Extremely simple but also extremely powerful. It gained power the thicker my shadow was, and lost it the thinner it was. Since it’s still sunset, it was on the weak side at the moment.

“If I ever intended to wield a sword again, I intended to show it to you before anyone else.”

“You’re someone who would give up her life for the royal family, aren’t you? Even for the sake of a ”Trash Prince”. So I wanted to show you that I’m not someone that has to be protected by a maid. I wanted to prove it to you.”

Someone who would gladly die for the sake of the royal family, for my sake. So I wanted to put a stop to such thinking.

Maybe because of my firm attitude, quite different from my usual flippant self, Feli looked different than usual.

“If you don’t want me to go on the battlefield, then try to stop me, here and now. Oh, and you better not hold back.”

I have led a slothful lifestyle that earned me the nickname of “Trash Prince”. In this lifestyle, especially curious were the long hours I spent sleeping. They are the reason why I told Feli not to go easy on me.

In the end, I kept dragging my previous life with me. It appeared in my dreams: I kept reminiscing about my past in my sleep, in the form of lucid dreams.

Since such dreams included the deaths of those important to me and my own death, normally one would find them excruciating, but I did not. My spirit was broken down to the point that I did not experience them as nightmares. They were unable to move my heart.

Because of this, no one offered me any sympathy, and I was simply thought to be a lazy degenerate.

In these long hours of sleeping, I always had a sword in hand. I wielded it, swung it. As if reminiscing about my past. This is why I told Feli not to hold back.

My physical body pales in comparison to my previous one, but my skill was preserved intact. If I only accept the fact that my body would be burdened, I can—

I convince her in a gentle tone.

With the skills honed in my past life, I approach her instantly and look at her surprised face from very close.

“If you hold back, it’ll all finish in an instant.”

Ground Shrink. One of the skills said to be the apex of martial arts.

Feli also lived by the blade: she surely knew about it and would understand quickly. Her confusion, however, persisted. How could that “Trash Prince” know a technique like Ground Shrink? She surely couldn’t wrap her mind about it.

Feli hurriedly jumped backward and put distance between us. She understood that I was not an opponent to underestimate after all.

I then made a proposal.

“Head maid, how about a little gamble?”

“If you win, I will obediently stop what I was going to do. I will listen to what you say, as much as possible, as long as we are in Afillis. But if…”

I wait for the perfect timing, then raise my voice.

“If I win, we’ll take a long vacation, together!”

Ignoring her perplexed reaction, I continue.

“Well, you see, my esteemed father was troubled too. About the fact that the head maid never takes a break. If she doesn’t, it makes it difficult for her subordinates to take days off: it’s a vicious cycle, we need to do something about it…complaints that I happened to eavesdrop. I just recalled it, hence the gamble.”

“E-eavesdropping!? Your Highness, you’re such a….!”

“Ah, no misunderstanding. It’s not that I want to enjoy a long vacation with you. This proposal stems from the fact that I figured out a way to prevent a certain maid from disrupting my precious vacation time!”

“…yes, of course, I knew that much. You don’t have the slightest interest in an old woman like me.”

Feli laughed at my hopelessness. Her expression seemed rather natural.

Until we arrived in the Afillis kingdom, Feli was the person who worried about me the most, which might have prompted me to spout something insane.

“I think you’re pretty, though?”

“As long as I have not heard wrong, then yes, you probably have.”

“Aaaahhh!!! I didn’t mean that, okay!? You just heard wrong!! I just said that I want avocado stew for dinner tonight!!!!!!”

Yes, I definitely said that I felt like having avocado stew for dinner. I most positively did not express that I saw this almost 100 years old elf grandma with looks closer to 20 years old as a woman.

Her tone didn’t fit her age either anyway, was she really almost 100 years old…? But the more I looked at her the more I realized how pretty she was…

“Whoa! That was dangerous. I was about to fall for the enemy’s trap…”

“Your Highness, if I may, you are just rambling by yourself…”

“Okay then, game time is over. I have a duty to fulfill the promise I made to Logsaria. Unfortunately, I cannot lose.”

“That’s a rather rough way to cut off the topic…but my years of experience with the sword have not been spent for nothing. Your Highness has not even practice regularly, so there is no way I can-”

Before Feli could finish her sentence, I interrupted her.

“One slash, one kill. My heart, my body is forever a battlefield.”

My agitated heart and mind turned still and clear. For me, it was something like a charm. My mentor used to say it all the time, so I ended up developing the same habit. That “charm”, however, changed Feli’s expression.

The aura around her was sharpened to a point, a clear difference from how she looked during her service as a maid. Her hands were already wielding her longsword, her previous hesitating self completely gone.

I caress the darkness-colored hilt and speak. To my shadow sword “Spada”, of course.

People often say that objects used with love for a long time would gain a soul. I personally believe that my Spada is no exception.

“Soon enough, you’ll be able to rampage as much as you want. But don’t hurt the head maid.”

There is no answer, of course. Even so, sometimes I have the feeling that my “Spada” has a conscience of its own.

I looked at Feli, already in a battle stance, and took one too. How many times have I wielded a sword while thinking that I didn’t want to kill my opponent?

Memories from my previous life’s childhood. In a shabby tavern, I happened to get to know a one-armed swordsman.

<<I mean, without an arm, you can’t swing your sword, can you? In this world, if you can’t fight you die. My mentor said so. So I don’t really understand what you said. I’ve never even thought about putting my life on the line for someone else.>>

Lantis continued to drink and turned towards me. His breath reeked of alcohol, but I was already used to it.

<<Listen here, kid. One day, you’ll find someone you want to protect. No mistake. In this world, everyone’s starved for some kindness. Me too, I was just treated a little kindly and fell for it, hook line and sinker. I bet it’s the same for you too, ***. You’re going to think the same thing when it happens: I’m going to protect this person with my life. You won’t be able to point your sword at them.>>

<<…a person you don’t want to point your sword at is someone you want to protect?>>

<<Aaah, that’s close. It doesn’t sound wrong, but, what? Is there someone not even you can point your sword to?>>

<<My my, that smells like first love. A sweet & sour love story between master and disciple…not bad.>>

Lantis delved deeper into his delusions as he downed more alcohol. Then, an unexpected voice interrupts.

In the end, I was alone, though. I had some enjoyable moments, even in that world.

I can finally understand a little the meaning of your words, Lantis. I don’t want to strike down Feli. No matter how much trash I might be, I still want to protect who cares about me.

You were right…we’re really starved for some kindness.

“Make sure you dodge this.”

I’ve never said something like this before, as I smile defiantly.