I looked at the woman next to me, my eyes narrowed to a slit.

“…why are you here again? Ratifah?”

“Why? To escort Your Highness, naturally! After all, you’ve been growing in popularity lately. Apparently, the head maid might not be enough, so I was tasked with accompanying you…didn’t I tell you yesterday? That Diestburg’s so-called ‘secret ultimate weapon’…will finally appear on stage…!”

Secret ultimate weapon…Ratifah? I glanced at Feli, — wearing casual clothes, differently than the usual — and she replied that she never heard of it either.

“But enough about that, that’s the flower shop, right?”

I shot an accusatory look at Ratifah, but she pretended not to notice and looked away, then pointed at the flower shop.

I looked ahead and saw Warrick’s flower shop, which I had just visited two days before to buy my usual bouquet.

Three days had passed since I met merchant Dvorg Tsarrich. I had obtained permission from my father for this meeting.

Under one condition, however: the maid Ratifah would accompany Feli and me too.

I laughed at the ridiculousness at first, but since she actually came, I couldn’t hide my surprise. Just like when Stenn moved behind the scenes to assign Ratifah as my personal maid, I suspected there were some hidden machinations going on, but I decided to comply.

Ratifah was supposedly skilled enough to be assigned to the position of a prince’s personal maid.

I only knew her usual impertinent, airheaded attitude though, so I couldn’t help but feel worried.

Even if I was told she was skilled, I couldn’t really imagine Ratifah fighting. She disturbed my sleep, put me at Feli’s mercy, conspired with Stenn…

That’s all I could picture her doing.

“By the way, one more person will come with us to the ruins, right?”

I remembered that when I talked to my father in detail about Dvorg’s request, Ratifah was with us too, then nodded.

“What kind of person is he?”

I recalled the boy that Dvorg charged with accompanying us to the ruins. When I went to meet Dvorg in the back alleys of Rinchelle, he mocked me as ruffians snuck up on me.

After that, there was more distance between us. When we met again recently, all I got was an “Ugh”.

“…a shitty brat with a shitty personality.”

As soon as I said it—

“Well, my apologies for being so shitty.”

Speak of the devil…I heard a voice from not far away.

It indeed came from the boy Ratifah asked me about. Veins bulging in irritation on his forehead.

“Well, I’m aware of my personality, so I don’t really care about that…more importantly, is she coming too?”

The boy calmly walked towards us. He looked at Ratifah, whose practical clothing didn’t suggest she was just there to see us off, then at me again. 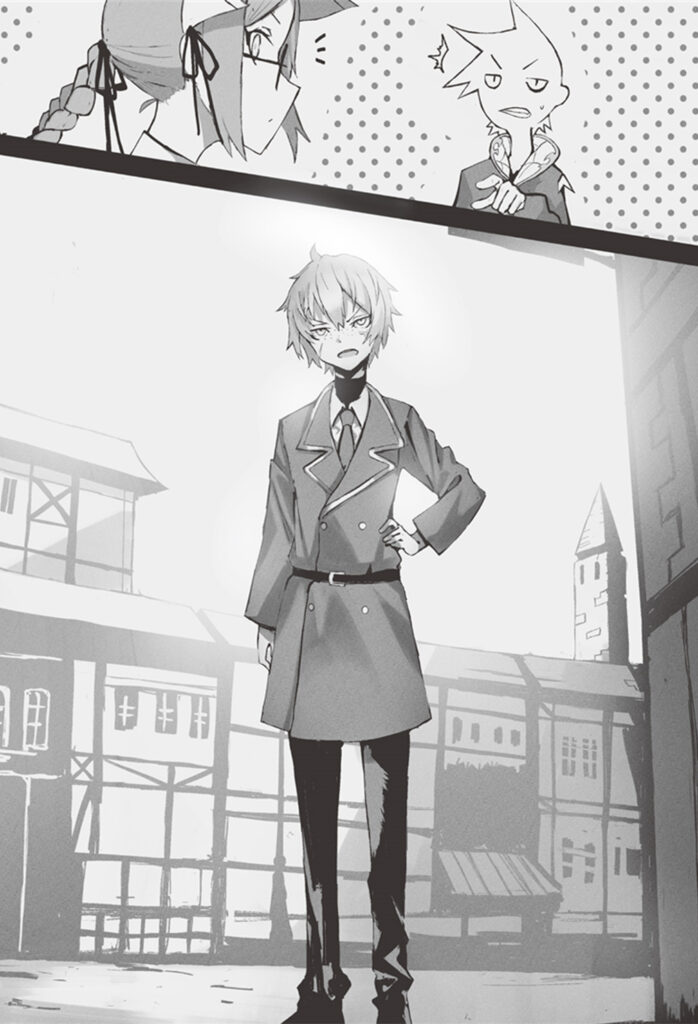 My reply made it clear that I wasn’t exactly on board with it.

For the boy, however, the important thing was whether Ratifah would come with us or not, surely not how I felt. He replied with a “hmm.” and turned towards her once more.

He then started staring, as to examine her from head to toe.

The “examination” lasted about 10 seconds.

Even Ratifah would have reservations about being judged so openly. She tilted her head to the side, but the boy’s reply was simple.

“You two sure look alike.”

The reaction came from me.

“It’s the air you have about you, I guess. You and she are pretty similar.”

My brow furrowing at the unexpected comment, I turned towards Ratifah to confirm the truth of those words—

“Is this a love confession?”

Ratifah’s wide-eyed expression and silly reaction completely destroyed any hesitation I had in disregarding the boy’s words.

I didn’t neglect to glare back at him though. I didn’t say anything, but my expression clearly stated how his impression was completely off base.

The boy stopped his sentence halfway.

I found it unpleasant that he left something hanging like that on purpose. Before I could urge him to say whatever he had on his mind, he continued.

The boy laughed wryly to himself and apologized.

But for just an instant…

He looked down and whispered something to himself. I didn’t miss it.

—is Diestburg pandora’s box or something….!?

Unfortunately, I could not comprehend the meaning of those words.

While I was thinking what a pandora’s box might be, the boy put a hand in his pocket and took out something that made a shrill sound.

“A magic tool that will let us locate each other in case we get separated. It’s pretty valuable, so make sure you don’t lose it.”

The magic tool looked and sounded just like any other small, red bell.

“If we get separated, ringing this bell will let us know each other’s position…well, we’re not going today anyway, so I’ll explain more in detail another time. So just take it with you for now.”

I couldn’t help but ask.

I was sure we were going to leave that same day, so the boy’s words came as a surprise.

“Three days was the time we needed to prepare these. Going to the “Forest of Downfall” is another story.”

The boy then rang the small bell, as if to show us how it was done.

“If these things were enough to not get lost, it wouldn’t be called ‘Forest of Downfall’ that easily”.

“…that place can affect even magic tools, after all.”

Feli complimented the boy’s words, a sour expression on her face.

If the forest could make even magic tools go awry, what was the point of using the bells?

Before I could voice my doubts, however, the boy spoke again.

“That’s why we need to wait for the right timing.”

It was like he could see through my thoughts.

“The ‘Forest of Downfall’ is surrounded by a sort of shell that leads even magic tools astray. But in certain periods, its strength decreases. That’s our chance.”

“During that time, these magic tools will prove useful. So our first move will be to go to ‘Fithdan’, a town near the forest, in order to wait for the right time. People from the empire are there too, undercover as normal townspeople, so we mustn’t attract unwanted attention. We’ll use fake names when introducing ourselves”

Especially that prince over there, said the boy as he pointed at me.

“It’s better not to use ‘Your Highness’ or similar anymore either. In Diestburg, those words would make people think of you or Grerial.”