The young woman repeated the words to herself while scratching her left cheek, a troubled expression on her face.

Followed by a melancholic smile.

“I’ve talked with all sorts of people, but your way of life and thinking are definitely the most beautiful among those I’ve heard. Beautiful, yes, but it also gives me the feeling of being in a prison.”

A prison? Now that was a rather extreme metaphor.

So I thought, but it also sounded very fitting. She probably meant that I was tied down by my past, and expressed it by comparing me to a prisoner. It wasn’t the nicest expression, but I didn’t feel any malice in her words.

“I think that’s a nice way of life though. Wonderful, actually. To treasure the time you spent in the past and carry it with you no matter what. There aren’t any right or wrong answers about how to live, right? You sounded a bit…self-mocking, but I think that such a way of life can be good too.”

I do not empathize, but I can understand.

And I don’t think it’s wrong. So she said.

The young woman then picked up her bowl and drank the soup inside.

“You lament the past, yet do not think to change it…no, in your case, I suppose it’s more like you *can’t* think to change it. Because you know how heavy that past is…I don’t disagree with it, but it really is a cramped way of life, isn’t it? It’s just like that of a king…”

I replied out of reflex. It sounded like she was speaking from experience.

“Yes, a king. It’s a sentence from the motto of a certain royal family, which I heard from a person.”

The young woman put down her bowl, then continued. For a moment, her gestures expressed a sort of authority, of class, something difficult to put into words…but it probably was just my imagination.

The young woman recited the words in a solemn tone.

It was very different from how she usually talked, probably to fit the content of the words.

“So? Don’t you think it’s similar to your way of thinking?”

Her words felt completely at peace in my heart.

I didn’t answer right away, but I truly felt there was a lot in common between me and those words. I honestly thought they were similar.

“Hehe, no need to put up an act. But if you think like that, you might be more suited to be a king than a traveler.”

The young woman continued in a joking tone, but I shut her down quickly.

“Reeeeally…? I thought you really looked like one though…”

“Unfortunately, I’m not the type of person that stands above others.”

I only accepted my position as a prince because it allowed me to lead a slothful lifestyle.

What would happen if someone like me, filled with regrets and always looking at the past, became king? It was a recipe for disasters and more regrets, I was sure of it. The living dead cannot be a good king.

Being a prince, I had been close to the existence called king. Closer than anyone else.

The king was the standard, the heart of the country.

I was definitely not suitable for such a position.

A face that laughed while the heart cried.

Could a weakling that still did something like that ever be suitable?

“I’m more than satisfied with the present.”

An admiration so strong I always dreamed about it.

But every time, in the end, it slipped through my fingers.

For unknown reasons, however, there were new people I wanted to protect. So I swore that this time I would protect them until the end. If I could live in a way that suited me, I didn’t need anything else. So I had no interest at all in the position of king.

A not too convinced whisper grazed my ears.

Followed by a voice.

“Why did you come to this town of Fithdan then? I doubt anyone would go to the ‘Forest of Downfall’ without a reason…”

“A person I’m indebted to asked me to help. And I had no reason to refuse them, so I accepted. That’s all.”

With a small smile on her lips, the young woman stood up.

One glance at her bowl revealed that it was empty.

“You’re so beautiful, aren’t you.”

“That’s not something you’d normally say to a man…”

“I guess so. Guess I should say you’re cool, then.”

Her clearly casual way of talking to me made me chuckle.

It didn’t feel unpleasant at all though.

The reason was probably that the young woman was a quite delightful person.

Slightly surprised at how casually I was talking to a stranger, I concluded it was probably due to her innate disposition, as I watched her back while she left.

The low, gruff voice was followed by the door opening.

Two silhouettes appeared, both perfectly described as belonging to massive, burly men. Even from a distance, the mounds formed by their bones and muscles were easy to tell.

Each man had a longsword at their waist. Strong lights glimmering in their eyes. The strength of their resolve. As I was rearranging the information in my head, one of the men — without waiting for the young woman’s reply — turned towards me.

He probably asked because of the dishes left next to me.

“A traveler I happened to meet. He said he came to have breakfast too, and we had a little chat.”

“I knew that *Ulle* would come to pick me up anyway, so I was killing time.”

“…in the company of that man?”

The man’s sharp, almost feral glare shot at me as if I was under examination.

Considering the man’s speech and attitude, it was hard to think he was a traveler. Nor did it look like they were companions traveling together.

The man’s presence was best described with the word “knight”.

The “knight”, after staring me up and down, left and right—

—was about to ask something, but was not allowed to finish his sentence.

He was interrupted in a stern tone by the young woman, who had been merrily enjoying her soup just moments ago.

Their conversation smelled like incoming trouble even too clearly.

Generally, I preferred to spend my days in peace, with nothing much happening.

So I felt the urge to pretend I did not hear anything, but the air in the room did not allow me to.

Rising early leads to good things happening. That very moment, I learned that those words I heard so many times were nothing but a huge lie.

“Ahaha, sorry, sorry. Ulle’s such a worrywart, especially when I talk to strangers by myself. I honestly wish he’d stop.”

The young woman grinned at me, then turned away again. Her gestures and movements showed she was feeling apologetic.

Right then, a sharp clapping sound resounded in the room.

I soon realized it came from the young woman clasping her hands.

“Oh yes! Now that I think about it, I didn’t introduce myself, did I? My name is Elena. I’m a sort of traveler, but also a runaway girl!”

“You always have to say that straight…?”

Next to the “firm and steadfast” knight type Ulle, another large man was there.

The man called Raem gave a softer impression. He sighed and the young woman — Elena scolded him in response.

Raem whispered that she could have easily kept quiet about it, but was scolded again for mumbling, so he turned quiet, a sad scowl on his face.

As soon as I said it, it was like the air in the room screeched to a halt.

In the utter silence of the cafeteria, my voice echoed.

Elena looked confused for some reason, but only for a second. She smiled broadly at me.

It was like my reply pleased her very much: she showed me her biggest smile yet.

A delightful person without anything to hide. I ended up thinking that she looked like a maiden that had yet to experience human malice.

After repeating the name several times, making the effort to learn it correctly, she turned towards the door again.

“Okay then Shizuki, let’s chat if we meet again one day. More leisurely next time.”

With those words, the storm called Elena left me as swiftly as she appeared before me. 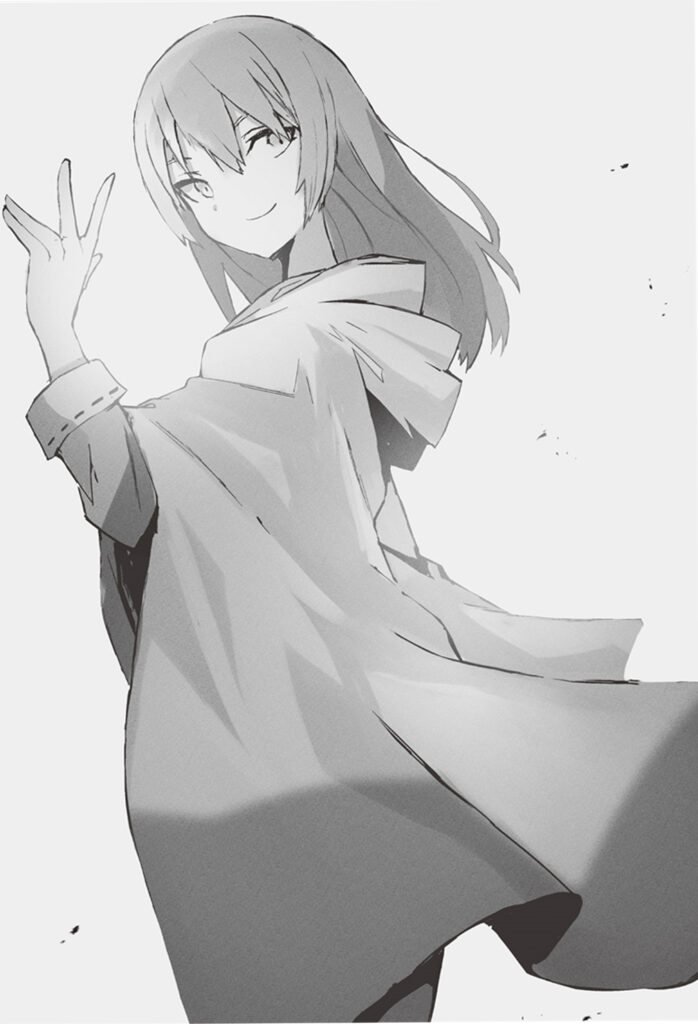