Chapter 7 – Out of Place

“Your Highness, won’t you strike a deal with me?”

I looked around to review our current status.

I was surrounded by several unknown entities, which overtly exerted pressure on me.

What I was facing was more of a threat than the proposal of a deal.

Which prompted my question.

“My request is one…Your Highness, come to the empire’s side.”

The knight’s tone was for the first time very serious. Very different from the whimsical one I knew.

It was easy to conclude that his words were no joke.

“Your actions will be rewarded, of course.”

The knight had called it a deal, so despite setting up threats, his request was not completely one-sided. I was slightly surprised by it, but I didn’t have the slightest interest in his following words.

So I exhaled, erasing all emotion from my face, then stuck a derisive grin on my lips.

I laughed, looking down on my opponent.

Feli reacted, probably out of worry.

It was my fault for laughing out of the blue, but I was in full control of my wits.

I repeated the knight’s words, imagining what he would have said next.

The empire’s blood flowed in my veins.

Stenn had said so.

It was surely true.

This “deal” was probably related to that. But even so…

“Whatever ‘reward’ you might have, I’m never going to say yes.”

But I continued, unfazed.

“I’m not interested in anything, anyway. Not in the king’s throne, not in my current position, not in women, not in honor, anything.”

I just have a couple of preferences, let’s say…I added, with a hand on my “Spada”.

“…why are you here, then? Your Highness?”

My words presented a contradiction, that was true.

If I wasn’t interested in anything, I could throw it all away. A choice like that would make it easy to live.

And that’s what the knight pointed out.

“I wonder that too…is what I’d like to say, but you wouldn’t be satisfied with that, I guess.”

I then stood up from my chair.

“Honestly speaking, I don’t know myself. The reason why I’m here, that is.”

That time, I could still run away.

I could run if I didn’t like what was going on, so why didn’t I do that?

If I longed for my decadent lifestyle so much, I could have acted in a different way. Yet I ended up choosing to wield my sword.

I chose to continue in the same way as before.

“One thing I can say is that I feel gratitude to some people here.”

I’ve always thought that I must have been a really creepy kid. I wasn’t childlike at all and, in a world where embracing the sword and aspiring to military might was a sign of honor and pride, I loathed the sword to a bizarre extent.

There were some people, however, who always treated such a weird child kindly.

The world was ashen in my eyes.

All I could see was an infinite wasteland.

I still clung to my past, but what pushed me to look forward was the existence of Feli and the others.

If it was someone else…

I probably wouldn’t be wielding my “Spada” like this now.

No, I definitely wouldn’t.

“…you would oppose the empire out of a temporary feeling? Throwing away the title reserved for you? Throw away your life meaninglessly, just like that!?”

“If it’s my life you want, I can throw it away anytime. But it doesn’t come cheap, mind you. Besides, to die while protecting those dear to me is more than I’d ever ask. There’s nothing meaningless about it. It’s the best, the coolest way to die, isn’t it?”

The knight was probably concerned about me.

He said that he didn’t dislike me, and he was probably being honest.

However…the knight didn’t fully understand who he was dealing with.

Even if a life of leisure would await.

Even if I could live the most comfortable, pleasant life ever.

I would never ever accept his deal.

The knight knew nothing of the man who lost the path to the place he was supposed to die in.

The pitiful man who became alone, insane with solitude, whose only escape was in death.

“You just don’t get it Your Highness!! You don’t know what the empire is like!! Maybe you have no idea, but the gap in military power is just that large!!”

The man’s voice brimmed with anger and the atmosphere grew tense.

“As long as you live!! You can do all sorts of adjustments later!! So— ”

“Unfortunately, even if you’re alive ‘adjustments’ just won’t work. Even if I survived, nothing but regrets would await. Every day I’d be choking with guilt.”

The knight was supposed to be in a position of advantage at first, but as we talked his tone became more and more restless.

The hand on the sword at his waist was shaking slightly.

The man who did not understand me at all was probably afraid.

“What I want is for these days of peace to continue. An unchanging lifestyle here in Diestburg. Days of doing stupid stuff, of being dragged around, of being scolded. I’ve tasted enough solitude already. I’m already sick of losing those important to me.”

I slowly moved to cover Feli from the knight’s sight.

Then I clearly stated my thoughts.

“Negotiations are over. What are you going to do? Kill me? Incapacitate me and take me away?”

The knight bit on his lower lip, a sour expression on his face.

“…Your Highness. You’re insane, you know that.”

In my previous life, I was never called that.

Normally one would find it unpleasant, but it sounded like a compliment to my ears. Because the people I aimed to be like, the people I aspired to had been described with that word often. To be called that was nothing but bliss.

Focused my nerves throughout my body, to recover that past sensation.

Just like in the battle on the remote island against Velnar, I relinquished control to my “Spada”.

A black mist-like substance covered my body, followed by faint cracks and painful sounds of my body structure changing echoed in my head.

After one moment of silence. 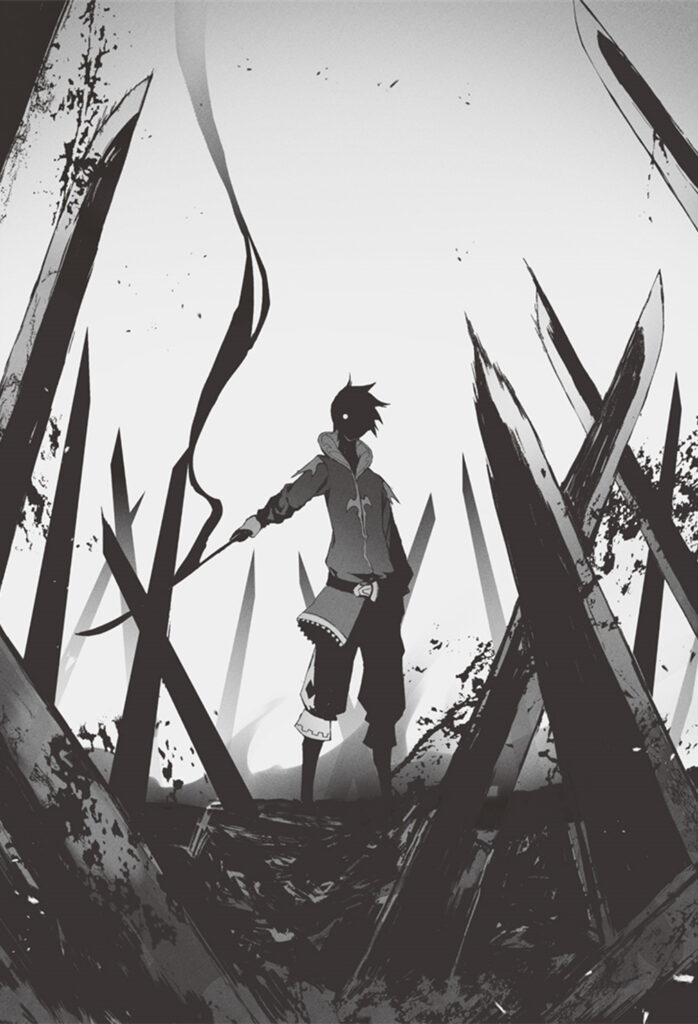 I called the name in my mind, and at the very same time.

The copies, unable to endure my “Spada”’s restraining power, dissolved one after the other.

For some reason, the knight’s shock rang exaggerated to my ears.

He should have seen my “Spada”’s ability in the bombing incident already. This time there were only more numbers, so there was nothing to get so surprised about. If doing so would make me lower my guard, things would be different, too.

Feli looked calm, probably she had seen me fight before. I pulled her closer and began my attempt to escape.

“It’s just a hunch, but I have a bad feeling about this. Our enemy is from the empire, stay alert.”

Eradication of other species.

I recalled the empire’s ideal that Stenn told me about and warned Feli not to be complacent.

The next moment, it really happened.

The place we were until seconds before now shone bright red.

A few seconds later, an explosion shook the mess hall.

“You’ve got good eyes there, Your Highness!!”

The knight was rushing toward us, half-hidden in the dust raised by the blast.

I unsheathed my “Spada” to meet the sword drawn by the man running toward us with bloodshot eyes.

The knight swung his sword downward in a powerful strike, which I avoided by stepping backward.

I looked at my enemy’s shadow with killing intent.

My “Spada” crawled out of his shadow, aiming to pierce his body, but he managed to dodge them and just suffered grazing wounds.

Again, there was a distance between us.

I didn’t attack the man again, but used my “Spada” to completely eliminate the copies that were going to attack from behind.

The attacks were targeted at Feli, again.

Attacking Feli to create gaps in my defense.

That was a solid strategy.

To attack her, since she was unarmed, was absolutely natural.

In my head, however, I couldn’t shake the feeling that something was off. There was something out of place.

I couldn’t feel any killing intent in the knight’s blade.

On the contrary, it felt like its only purpose was to draw my attention.

The unnatural explosions and the copies which appeared and disappeared were both threats.

But for whatever reason, their fangs were not bared at me. It was more like Feli was their priority target—

“…I just hope I’m thinking too much.”