The stone slab engraved with the name “Rudolf”, and the monsters called “Abominations”.

I barely managed to utter the words, but my throat refused to complete the sentence.

It was just a possibility.

Even if it was nothing but a possibility until now, my instincts told me that if I said those words, I couldn’t go back anymore.

I refused to accept the possibility that the world Fay Hanse Diestburg was born in was the future of — — .

I sighed deeply, then looked up at the sky, to try to keep myself from sinking in the sea of flooding memories.

Nature is the best scenery to freshen your mind…I thought, then forcibly twisted my expression into a smile.

There was no incontrovertible proof that the theory that formed in my subconscious was true.

First of all, the Rudolf I knew was not an illusion user. His abilities were specialized in leaving things for the future.

The only person I knew that could create an illusion of this scale was one, just those dreadlocks —

My train of thought suddenly stopped.

The static noise triggered my restlessness.

Wasn’t it simply a rationale for an illusion of this scale to be created with the help of others?

After reaching this idea, I turned towards not the sky or the stone slab — but towards the forest wrapped in illusion. I stretched my hands again.

The illusion was definitely not Rudolf’s doing. Who could ever have created something so large in scope? An illusion so perfect I couldn’t find the tiniest chink or gap?

I could think of one such person.

My hands penetrated the membrane of illusion surrounding the forest and the scenery twisted. My heart beat faster, louder.

“Right…I should have known. An illusion of this level couldn’t be made by just anyone…”

As soon as I started considering it, the waves of nostalgia crashed against me, again.

There was no mistake. How could I fail to recognize it?

“So you were involved too.”

The best illusion user I knew.

As I repeated his name in my heart, I was attacked by indescribable loneliness.

It was born from the sadness of realizing that they did this by themselves in secret and a bit of helpless anger for being excluded.

Caught in a mixture of feelings I could hardly put into words, my previously brisk walking pace stopped completely.

I had come to the “Forest of Nightfall” to search for clues about the “Abominations”, so I had nothing to do here anymore.

The two men I recalled loathed the existence of the “Abominations” just like me. There was no way they would ever make mistakes in a matter related to those creatures.

In my heart, I continued refusing to accept that this world was “———“‘s future, but not only did I state their existence was a lie too, I even tried to leave this place behind, thinking that there was no need to investigate something they created. I had to admit I was acting in an awfully self-serving manner.

“I have no more reason to hurry now. Let’s just…wait quietly.”

As soon as I whispered that…

A familiar silhouette appeared in my line of sight. Three of them, to be precise.

A young girl walked ahead of them. The name of the energetic-looking girl escaped my lips.

The young girl I met in the inn’s cafeteria did say that she had something to do in the ancient ruins.

A man wearing sunglasses was there too, apparently waiting for them: Elena’s group approached him and they started talking.

I was pretty far from their position, so I had no way of listening to their conversation, nor was I inclined to engage in something as uncouth as eavesdropping.

Despite this, however, I continued looking at them. The cause was the man talking with Elena’s group.

Short, beige-colored hair. Sunglasses. A scar clearly cutting across his right eye. Those were his major characteristics, but there was something — something that told me I knew him.

If we had met before…

Where could that have been?

Thus I started searching my memories for clues. Being unable to use my hearing, I concentrated on my sight to read their lips.

『That’s my line. We came here because you people called for us, remember? You’re asking that question to the wrong person.』

『I’m pretty sure I *already told you* that I don’t belong to the empire. I don’t have the authority to summon you anywhere.』

『…you appear here at this perfectly calculated timing, only to say stuff like that?』

『It appears all my warnings were for naught, *Princess of Calsas*.』

『…if you address me like that, there is no way I can trust your words. And you should know that more than anyone else.』

『That’s not true. I am warning you because I know of that. What you are looking for is not here. If you understand, go back to your country already.』

The unfamiliar word made me furrow my brow.

『Or maybe are you going to tell me that the thing you seek has changed from an ideal to something filthy, in just a few days? Let me put it another way. Are you feeling nostalgic for your sister?』

At that same moment, I could clearly hear the sound of something snapping sharply.

The guard standing behind Elena, the man she called Raem, had stepped forward. His speech was casual, but his tone hid rising anger.

『I’m not going to let him get away with words like that.』

『Sorry princess, but this isn’t a matter of patience. I just can’t allow that. If I stay here quiet while a person trying to save our country gets insulted, I’m over as a human being.』

Thanks to Elena’s pleading, Raem begrudgingly withdrew his open hostility and the hand ready to draw his sword.

『Your goal is to research the ruins. You are trying to make us return to our country because that works in our favor. You wish for us to return so that we can draw away attention from what’s going on here, I imagine. You mustn’t have much time left. The empire’s people are impatient in nature, after all…or there is a reason why you want to leave the “Forest of Nightfall” as soon as possible, maybe?』

Elena cocked her head to the side, inviting the man in sunglasses to refute her words, if he could. There was no reaction, however.

『I think my deductions are pretty on point, though. What do you say, Mr. Heart Scan — Cohen Socaccio?』

She asked him for his opinion outright.

『It’s pretty easy to figure out why you would tell us to go. But…no, that’s why I don’t understand. You should have known already that I could figure out your intentions.』

The man named Cohen Socaccio closed his eyes for a moment.

『That some things are better off not known. Let me warn you once again but as an archaeologist. In certain cases, the blood of royalty becomes a key to decipher history. So I cannot have you die…Princess of Calsas. That is not a place for you to go.』

『Knowing your current position, I can easily tell what you are feeling. How many years have passed since the tragedy that struck that small, miserable country that dared resist the empire? The “tragedy of Calsas”?』

Even facing such hostility, however, Cohen continued talking.

『A tragic massacre that extended even to civilians who did not put up any resistance. You are clinging to a sliver of hope, I imagine. That is perfectly fine, as long as there really is hope. But if that last ray of light turns out to be a mirage, and you find out that the brutally murdered citizens were offered in sacrifices to *beasts without a conscience*, I honestly doubt you would be able to stand it, especially in your current weakened state.』

The moment I heard those words, hideous emotions started oozing deep in my stomach. I started lip reading their conversation out of curiosity…but now things were different.

My thoughts started racing, faster than ever before, leading me to the answer.

The people I was looking at disappeared from the scenery before my eyes.

Cohen Socaccio referred to himself as an archaeologist. There were surely many things he knew.

The fight with the empire wasn’t going to start yet. So it would be very bad to cause an incident now. I had to avoid creating a commotion.

I had to…extract the information from him. Definitely.

So I repeated to myself as I stood up.

Responding to the words etched in my soul, I felt a surge of hate throughout my body. I desperately pushed it back. I couldn’t show it just yet.

I approached my target, my pace quickened by my restless feelings. As I did, their conversation started gradually reaching my ears.

It was Elena’s voice. She called my false name.

Her tone was full of questions. She surely wondered why I was there.

The man followed with a question of his own.

All eyes were directed at me.

Elena’s group and the man in sunglasses surely shared a connection.

They surely had important things to talk about.

Their previous exchange was proof enough. Nevertheless, I prioritized my own circumstances. I interrupted them without restraint.

“Hey, Elena. Let me have this guy for a minute.”

I gestured to Cohen with my chin.

Her reaction was of helpless incredulity, of course. She had no idea what was going on.

“I have to ask this guy about those disgusting ‘Abominations’. So — I’m sorry to barge in, but let me talk with him first.” 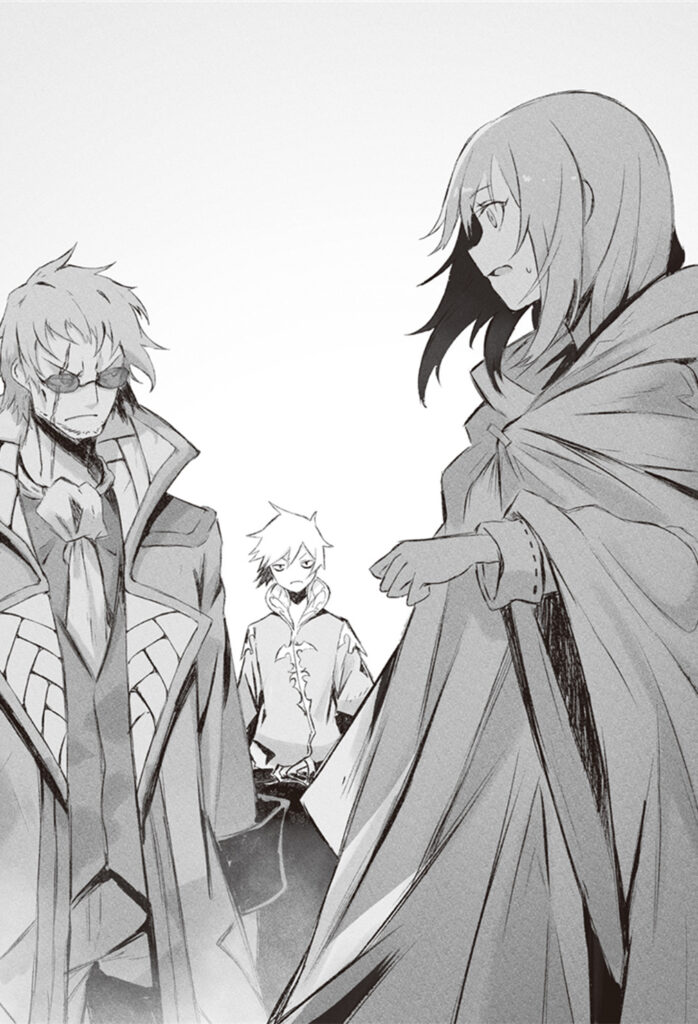