Cohen Socaccio looked at Feli, rushing to Fay’s side as soon as the battle ended.

“Did you fall in love, sir ‘Hero’? Too bad, I’ll never let you take the head maid! Not that she’s mine or anything.”

Ratifah and the others were spectating relatively far from the battlefield, but the ground under their feet was still partially frozen. The extent of the two duelists’ clash of pride was evident.

The “Hero” named “Heart Scan” looked at Ratifah with suspicion in his eyes.

“What a strange question. Can’t you just read me too? You don’t need to ask me, just use that precious ability of yours.”

For some reason, Cohen did not reply.

“Oh? Could it be that you wanted to hear me say it in my own words? Let me oblige, then. Brace yourself, sir, for I am the one known as Diestburg’s ultimate weapon— ”

“Why did you stubbornly refuse to help Fay Hanse Diestburg? Despite how strong you are?”

…aah, so that’s what he meant. Ratifah’s expression tensed slightly.

“What’s the point in helping…? Even without *us* around, Shizuki can walk on his own, one step at a time. Are you telling me to help him so that he can start depending on *us* again? You’re telling me to force my presence on him again?”

Ratifah protested, as if Cohen said something obviously absurd. The latter grimaced.

Ratifah had barely managed to keep a calm tone, but it finally broke down, turning harsher than before.

“He suffered until he died because of that…but in that world it just wasn’t possible to have a normal happiness, a normal life, a normal…way to die.”

You survived another day. Congratulations.

In that world, hearing words like that was the epitome of happiness.

It wasn’t normal to make such a compromise, but there was no other way…that’s the kind of age it was.

But now things were different.

“The more important someone is for me, the farther I have to stay from them. So I decided to just watch over him, as long as possible.”

“To borrow the words of His Highness Prince’s Stenn — this is probably ‘love’.”

Ratifah smiled a little, probably because she wasn’t used to saying such words.

“Of course you don’t. Even if you can read someone’s heart, understanding their feelings is a whole nother matter. For someone who just wishes to know, it seems perfect, though.”

Then — it happened. In a split second.

The sound of something being squeezed.

“I have no intention of trusting anyone other than those close to me, you see? Besides, you’re on the empire’s side and all. I have no choice but to tie you up, right?”

Shizuki is all wounded like that, so we can’t have any nasty surprises, can we.

As she talked, Ratifah proceeded to tie Cohen’s hands and feet with rope she pulled out from who knows where.

“One more thing, you can read people’s hearts as much as you like…but if you try spying on my or Shizuki’s memories, I’m carving out your eyeballs.”

Ratifah’s smile was bright to the point of becoming unsettling.

“Because it makes me sick to think that someone like you shares memories that *only* Shizuki and I have.”

Maybe because he had seen Ratifah’s one-sided victory against “Backlash”, one of the other imperial “Heroes” assigned to the mission, and he knew he had no way to escape.

Or maybe because he felt guilty.

Cohen made no serious attempt to resist her “arrest”.

“Don’t peek inside me or Shizuki so readily anymore. Am I clear?”

Cohen, his hands and feet firmly tied, couldn’t help but fall down on the ground.

Ratifah didn’t spare him another glance, however, and turned instead towards the bloody boy.

They met, found they had much in common, laughed together, bickered, and quarrelled.

They dreamed about a happiness they would find one day — then, suddenly and banally, died.

The lives of so many important people vanished before their eyes in that shithole of a world.

The man who shed so many tears, who couldn’t laugh from the bottom of his heart anymore — or so he was supposed to be.

“I take my eyes off you for a bit, and now you can smile like that…”

The silhouette of the smiling boy appeared in Ratifah’s eyes.

His body had already far exceeded its limits, but he stood up straight, as if it meant nothing, and laughed loudly.

— that smile was unlike him…in a good way.

It wasn’t a fake one, but a pure, natural one, born from the heart.

“That fits you better, Shizuki. To smile and laugh like that.”

If he heard her words, he would surely refuse to accept them.

But for Ratifah, that was just “like him” to do.

“So it’s time you forgive yourself, Shizuki.”

She continued talking to the boy obsessed in his past.

“You suffered a lot…hid your weaknesses — everything, put up a front, always…”

… you kept accusing yourself, reaching for a past that won’t ever come back…

No one wished for you to do that in the first place. No one would blame you for anything.

“You’ve done it enough…too much.”

She didn’t want to tell him to forget his past.

It was because of that past that Shizuki was now Fay Hanse Diestburg.

“You can look forward, at least a little bit more.”

Ratifah smiled at her “clumsy little brother”. The head maid was probably scolding him for running off on his own.

“If you keep carrying all those burdens…your family is going to worry.” 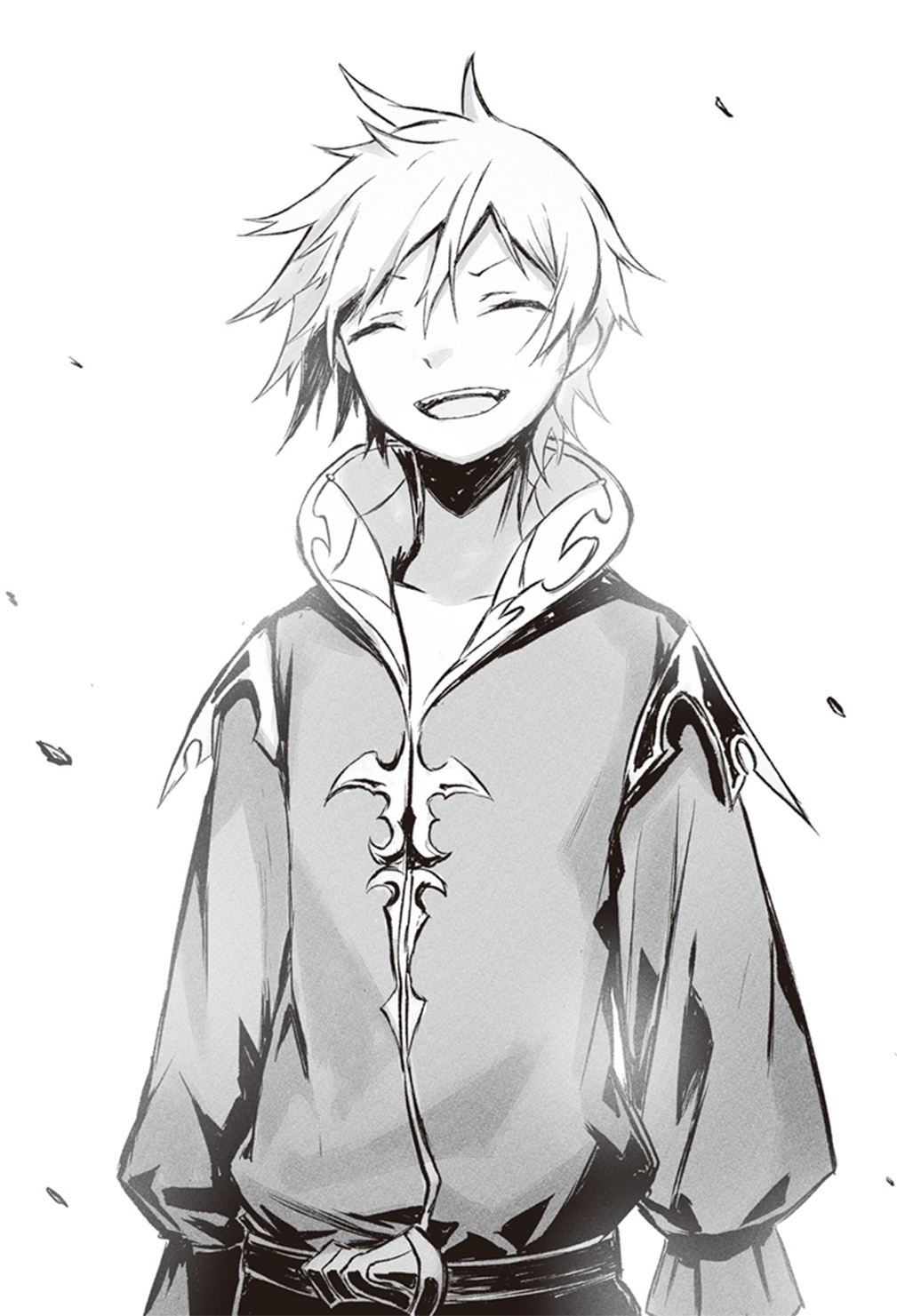 My head refused to work.

Maybe there wasn’t enough blood circulating in it: I just couldn’t focus.

My field of sight was like a window during a rainstorm. I could barely stand up.

I felt like I would fall down if I moved just one step.

A sense of accomplishment and fatigue.

Because I had to show off, I was covered in wounds. I couldn’t even tell for sure if I was still holding my “Spada” or not.

…five more minutes. Or maybe ten. I’ll have recovered a bit then, I thought, standing there motionless. Suddenly, a shadow cast over me.

“…honestly, what are you doing?”

Words half hopeless, half accusatory.

I dodged the question.

I couldn’t see the person before me well.

But the voice, tone and words made it easy to tell who she was.

…at the same time, I recalled something.

I told her I was only going to check the location, didn’t I.

I sure turned out to be a huge liar, I thought, with a wry smile.

“I told you not to do anything rash, didn’t I? Why…won’t you listen to me?”

I didn’t plan to do anything rash.

I just showed off my pride a little.

In Feli’s eyes, what I did looked like nothing but rash, definitely.

“…look at all this blood…Your Highness, do you have a deathwish?”

“…well, honestly, it wouldn’t have been too bad to die like that.”

I was being honest. Somewhere in my heart, I felt it wouldn’t have been bad to go like that.

“But I have no intention of dying…I can say that for sure. Maybe you won’t believe me, but I wasn’t thinking about dying at all.”

…I honestly thought so.

I did think that it wouldn’t have been bad to die there.

However — I had no intention to actually go.

I smiled and looked up at the sky, then called the name of the girl that should have been behind me.

Because of the blood covering my eyes, the normally azure sky looked bright red.

“In the past, I wanted to die really badly. On a completely different level from you back there.”

That desire to die influenced me to this day.

That was probably the reason why Feli looked like she was about to cry.

What should I do to meet someone who has already died? How should I die? What kind of death would I find satisfying? In the past, I thought about things like that all the time.

In the end, I couldn’t endure my solitude…and took my own life. Because of that, the hope that dying would lead me to them again was torn asunder too.

“But as you can see, I’m still alive. I wanted to survive.”

Because I willed it.

— even in pain and suffering, even in despair, even if trapped by regrets and guilt, even people like that continue to dream. So don’t look down…look forward.

Words someone told me a long time ago. They suddenly flashed in my mind so suddenly, I couldn’t recall who said them.

— A future happier than the present will definitely come. The day we will feel content with ourselves will come…no matter what. Because as long as we can dream, our hopes are never gonna die.

“The reason is probably…I guess I finally found it, something to be content with myself.”

I never uttered such words before.

But I probably subconsciously felt it.

That I was happy now.

There was no other way to explain it.

“I understand your pain, so much that it hurts. But let me say this — people can still dream. You might find happiness one day. So don’t let yourself sink into despair and throw away that possibility.”

I suffered, wept, eventually fled into the arms of death — but there was no happiness to be found.

…if you don’t go on living, the possibility of finding happiness will be lost too.

So I continued talking, almost obsessively. The dream-like, faint memories that surfaced in my mind moved my mouth. Don’t ever become like me, I said over and over.

“You’ll find your own happiness too one day. Definitely…one day, no matter what— ”

— after all, even someone like me could look to the future.

If you look at me like that, with genuine concern, I can’t look down all the time, I can’t say “I want to die” anymore, can I?