Shin walked down the main avenue, alone, heading to a place that both Celica and Els recommended. After a while, he spotted the insignia, a fork crossed with a sword. The chef here was apparently a former adventurer, who used foreign recipes and rare ingredients in his menus.

Shin remembered the female Rokuten member in charge of cooking and laughed wryly.

One of Cook’s dogmas was that she had to catch her ingredients herself: while gathering ingredients she defeated enough monsters to raise her stats to near max. All Rokuten members were pretty unusual players, but Shin was especially impressed by Cook when he saw her cut up a dragon with two specially made kitchen knives.

“I’m getting even hungrier after remembering that…”

Shin quickened his step towards the restaurant. It was noon, so it was pretty crowded.

“Come on in! Thank you, please wait a moment!!”

The sound of the door chime rang through the busy restaurant. The only waitress inside was going back and forth between the counter and the tables. Shin was pretty hungry, but couldn’t complain in a situation like this, so he waited quietly next to the door.

Maybe because the owner was a former adventurer, or the location was close to the guild, most customers were armed and armored. Many of them probably gathered for the Skullface extermination too.

“I apologize for making you wait, allow me….oh, sir Shin?”

Shin was surprised to hear his own name from the waitress’ mouth: he looked at her and realized that she was none other than the guild’s Cilica, her hair tied in a ponytail. For an instant, he thought that Celica had changed clothes again.

“Correct. Did my sister recommend this restaurant to you?”

“Yes. I’m grateful for everything you both do for me.”

“….you must truly be someone special for her to recommend this place so soon.”

Cilica spoke softly, with a serious expression on her face.

“Did you say something?”

Shin asked, curious, but Cilica shook her head and cut off the conversation there. They couldn’t just stand next to the door and keep talking.

A group of clients left and Shin was led to the only open table. Shin felt awkward at occupying a whole table by himself, but the counter seats were full. Cilica explained that Shin would have to share the table with new guests, then took his order. Soon after Shin ordered, Cilica returned to ask him to share the table with another guest.

“I’m sorry, sir Shin, but a new guest arrived, so I have to ask you to let them share the table with you.”

The new guest was, naturally, an adventurer: a man armed with a spear that emitted a sinister glare.

Shin mumbled to himself after looking at the ominous-looking weapon.

“No, I’m glad actually. Feels bad to have a whole table by myself.”

Shin casually greeted the man and faced him. He was about as tall as Shin, with red eyes and black unkempt hair. His skin was almost sickly white.

Shin thought that the man was pretty good-looking, but the light in his eyes was too sharp, his atmosphere too feral, so the impression he gave was that of a hungry, wild beast. A hunting beast, coldly finishing off its prey. 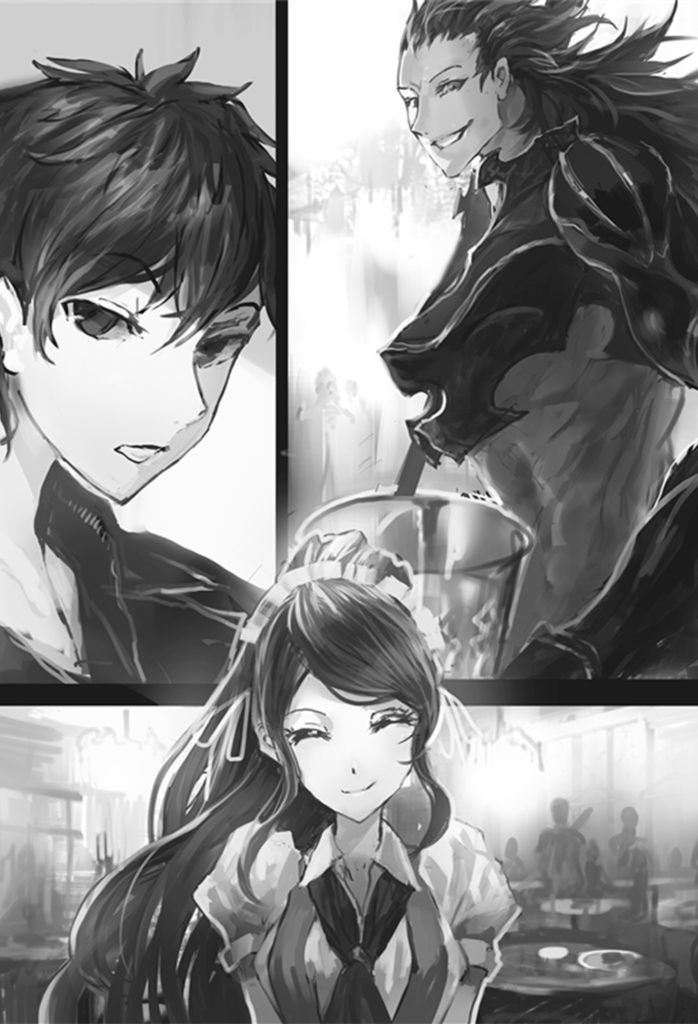 His level was 188: he could probably defeat the Skullface Jack without much trouble.

“The name’s Shin. Maybe it’s fate that made us meet today, it’ll only be a short while, but let’s enjoy the meal.”

“….it’s been a while since anyone talked to me like that. I’m Wilhelm Avis. You a new adventurer?”

After briefly observing Shin, Wilhelm introduced himself. Shin cocked his head to one side and answered his question.

Shin then noticed that, while the store was as noisy as before, many eyes were focused on his table. Shin was just a new adventurer, so the reason was probably Wilhelm. Shin didn’t know why that was, but there was no actual harm done, so he chose to ignore them.

“Third day? Still, you’ve got pretty good equipment. Were you a mercenary before?”

“Not really? I came from the countryside and traveled a fair bit, though. Because of that, I don’t really know anything about how things work around here.”

“….so that’s why hearing my name didn’t scare ya off. Normal adventurers wouldn’t ever share a table with me, ya see.”

“You did something to scare them off…? What exactly?”

The situation was one that would make many break in a cold sweat, but Shin replied calmly.

The surrounding adventurers looked at Shin with expressions screaming “how the hell can you speak so casually?!?”

Shin didn’t feel any intimidation, though. He didn’t feel like Wilhelm was the type to do anything evil, too.

“Nothing special. I’ve been killing undead monsters for a while, so I’m always fighting in places where people rarely go. After a while, people started spouting that I might be sucking the undead’s power in me.”

“What the…that doesn’t make any sense.”

Shin thought it was just envy. It must have been a joke.

“Yeah, that’s just how I see it too. It’s only low-ranked fools that believe that bull anyway. The real reason is that I have this.”

Wilhelm then grabbed 『Venom』, that he had put against the wall.

“This 『Venom』’s a Legend-grade weapon, it can steal the lifeforce of its target and give it to its wielder. That’s useful enough by itself, but like all Legend-grade weapons it’s pretty damn strong too. Plenty of these weapons have abilities that even their users don’t know too.”

“You’re not sure even after using it?”

“Yeah. Some people even get cursed without realizing it. Besides, my weapon’s ability is absorption, so they’re scared shitless that it might suck up even my allies’ lifeforce without me meaning to.”

There was no weapon description window anymore, a staple in the game, so not even the users themselves fully knew their weapons’ abilities in some cases. For Shin, who knew the weapons’ effects, it all sounded ridiculous, but in this world it wasn’t. That must have been the reason why everyone was looking at them too.

“Why not have it appraised?”

“Appraising only tells you the materials, man. Well, I tried to be sure, but all I got was its name and grade. The ability I told you about is something I noticed by myself.”

“What’s the skill level of the appraiser?”

Shin nodded in understanding: that wasn’t enough for sure. A skill level of VIII or more was needed to appraise Legend-grade weapons, IX for Mythology-grade and the highest level, X, to be able to tell the abilities of Ancient-grade weapons.

In the game era you just had to ask merchants or blacksmiths, players who actively raised their appraisal skills, but it looked like in this world that didn’t work either.

Shin was about to switch to the next topic when Cilica brought the food they ordered. Wilhelm must have already ordered too, because Shin saw dishes he didn’t remember ordering.

Shin agreed and proceeded to chomp down on his food. He had ordered leg meat of a monster called Roast Chicken. From the piping hot meat wafted a strong aroma that tickled Shin’s nostrils. Juicy meat that filled Shin’s mouth the instant he bit down on it, spices’ scent with a delightful impact, crunchy crust and fluffy filling, a deadly combination that mercilessly struck the famished Shin.

Shin’s wild momentum provoked a snide comment from Wilhelm, but the latter attacked his food with similar speed, so he really wasn’t in a position to preach.

Both men continued to eat in silence and ordered seconds once. In the end, they ordered tea -black tea existed in that world too- and sipped it.

“It’s been a while since I last had Roast Chicken. With a name like that, it looks like it was born to be served too.”

“Either that or it roasts us black.”

Even with a silly name like that, it was a level 100 monster. As the name suggested, it was a bird-type monster, but it couldn’t fly or even move too quick; its greatest characteristic was the ability to breathe fire, with power so high that it made you think that they set its stats wrong. It was thus infamous for being a first-time player killer.

“By the way, are you sure it’s okay to tell me all about your weapon’s abilities? Things like that are generally kept hidden, no?”

“All I told you is stuff everyone knows. Nothing changes if a greenhorn or two knows about it too.”

Shin said goodbye to Wilhelm as he would to an old friend. The adventurers around them were abuzz like before, but he did not care.

A little after Wilhelm left, Shin did too. The first encounter between Rokuten’s High Human and the White Lion Lancer, who would later share the same battlefield, was as plain as it gets.