The outer walls were being destroyed, with parts of the walls falling into the city. For Erkunt’s citizens, it was more than enough to create panic. The people and carts that were unfortunate enough to be close to the walls were crushed by the debris. Even just the vibrations caused by the impact injured many of those near the source.

The nightmare, however, had just begun. From the other side of the destroyed walls, the very perpetrator of this disaster had shown itself.

Despite being as tall as the walls, only the upper body was visible. Centered on its torso, with bones protruding from the sides, was a lion’s head that looked to be grafted into it. Its head, shaped like a goat’s head made of bone, was adorned with black curved horns that signified the ominous catastrophe.

The beast’s appearance was much different than the monsters the people were used to seeing, enough to make even adventurers quiver.

Some people, who did not have the strength to move, and fell prey to the devil’s aura. Their almost non-existent resistance caused them to be affected by Avaritia’s status ailments all too easily.

Thanks to their stats, Shin and Sherlene’s only felt an unpleasant sensation, but the average citizens had levels of only one or two digits, so they were powerless. Not only were the citizens immobile, but also the ones screaming in pain due to their wounds stopped, unable to voice their pain due to the status effects.

The same applied to guards and adventurers. They were much stronger than the average citizens, but they still could not match Avaritia’s power.

Level 750. Only a very small number of Chosen Ones could hope to be able to fight it.

It was a level of strength that most humans, whose level cap was fixed, would never reach. It would be almost impossible to even reach a level high enough to actually “do battle” against so much power.

Without exceptional strength, the “battle” would only devolve into “slaughter”.

“What’s going on!? Didn’t they say that the devil had been defeated?”

The guards, who firmly believed in the good news they had received, struggled to get back on their feet, to no avail.

Thanks to the efforts of the heroes and devil hunter clan, the devil threatening Erkunt had been vanquished. The information had come from the kingdom’s higher ups: they couldn’t not believe it.

What was the creature before them then? That ominous figure and power was a devil’s through and through.

The guards, who had been informed about the potential threat of a devil, would naturally identify the beast destroying the walls as a devil.

Voices requesting help could be heard from here and there.

Some of the guards and adventurers were somehow able to stand back up, but that was all they could do. They barely had the strength to help themselves, so helping others was out of the question.

There were many wounded, maybe even deceased, in that place alone. No one could tell when the walls would completely crumble, letting hordes of monsters inside, even then, it was impossible for the people take shelter elsewhere.

Unbeknownst to the guards, the situation was changing. The oppressive aura suddenly vanished.

The soldiers were still having trouble regrouping, but one of them quickly recovered and shouted while looking at the walls.

The other soldiers looked too, but found nothing but piles of rubble, with no sign of the monster that created them. A large, gaping hole was left in its place.

The soldiers could also see the clouds of dust hanging over it.

A soldier with better eyesight than most shouted something unbelievable. The monsters marching towards the city, forming orderly files, were all clad in armor and wielding swords, spears, or other gear reinforcing their horns and fangs.

“Shit!! Send an emergency dispatch to the guild and the army!! If you can move, grab a weapon!! If we don’t stop them here, they’re going to break into town!!”

“Us against that many!? I’ve never even seen most of them! There’s no way we can stop them…we should retreat.”

“We can’t! If those get inside the walls, there are going to be massive casualties!!”

The soldiers who were shouting at each other both held their weapons with trembling hands.

They were guards who received training to keep the city safe. They understood very well how dangerous the packs of monsters before them were.

If they fought, they would, without a doubt, be annihilated. However, thinking about what would happen next, they couldn’t just withdraw. After all, the majority of the people in the city could not fight.

If they were attacked by monsters, they would be killed if they were lucky, or played with if they weren’t. As guards, they couldn’t simply let that happen.

“Lend me your ideas, then. Even if we make a wall here, we’re just going to be routed.”

“Tch, alright. I don’t think it’s worth jack shit, but let’s buy as much time as we can with bows and magic! If you want to run away, go and don’t turn back!!”

Realizing that there was no time to waste arguing, the guard that was previously accusing the other guard advocating to protect the city shouted to the others. He too was one of Erkunt’s protectors: he was certainly not only worried about his own safety.

However, contrary to his expectations, not one guard fled.

“Hah, no one’s running? Guess I was a real dumbass for arguing!”

“Don’t think so. Our little spat here served to make some of us make up their minds.”

“Some fools they are. You’ve got me in this, you better get me some good booze later!”

“If we survive, sure enough!!”

A grin on their lips, born from their newfound courage, the soldiers faced the monsters. The other guards and some of the adventurers that happened to be close by were wielding their weapons too.

Everyone was smiling, but they knew they were way over their heads.

The ones who used bows or long range magic were attacking, but not even one monster fell. Even if their attacks struck, the enemies’ armor protected them.

The troops of monsters approached, the ground trembled beneath their feet.

However, that foul army, could not penetrate the hole in the wall and invade the city. Flying over the soldier’s heads, a storm of lightning arrows rained upon the monsters.

The lightning struck through the monsters’ armor, which had repelled all magic until then, burning through their hides and scales too, putting the monsters on the front lines out of commission.

Some still breathed, but the damage and fear prevented them from moving. The monsters on the front lines, who had stopped in their tracks, were crushed under the feet of the monsters behind them, which couldn’t stop in time, disrupting their progress and creating chaos among the ranks.

“Seriously…? What was that?”

The ice arrows, just as the lightning storm before, completely disregarded the monsters’ protective gear and hide, stabbing them as if skewering through fruit. The arrows passed through some monsters and stayed lodged in the bodies of others, but nevertheless it was enough to halt their momentum.

The spectators mumbled such comments while seeing the monsters drop one after the other.

If former players were present, they would have recognized that the lightning attack was the Lightning magic skill 【Thunder Split】 and the ice arrows were created by the Water magic skill 【Eis Ast】.

Some monsters remained, but the soldiers thought that those massive magic spells couldn’t have left many. They all agreed in their minds that such a powerful magic user had to be widely renown. Lightning and ice. Based on the spell’s power, they had to be skills, not arts. No one present, however, could think of a magic user that fit the description, so they were all puzzled.

This mysterious spellcaster then appeared.

A red long coat, hot pants and long boots, golden hair flowing in the wind. A slender silhouette, long ears and incredible magic power: the soldiers behind her realized that she had to be a High Elf.

At the same time, they found it unusual that she was wielding blue and red short swords. Judging from the strength of the spells, they were sure the caster was a mage with a powerful staff. 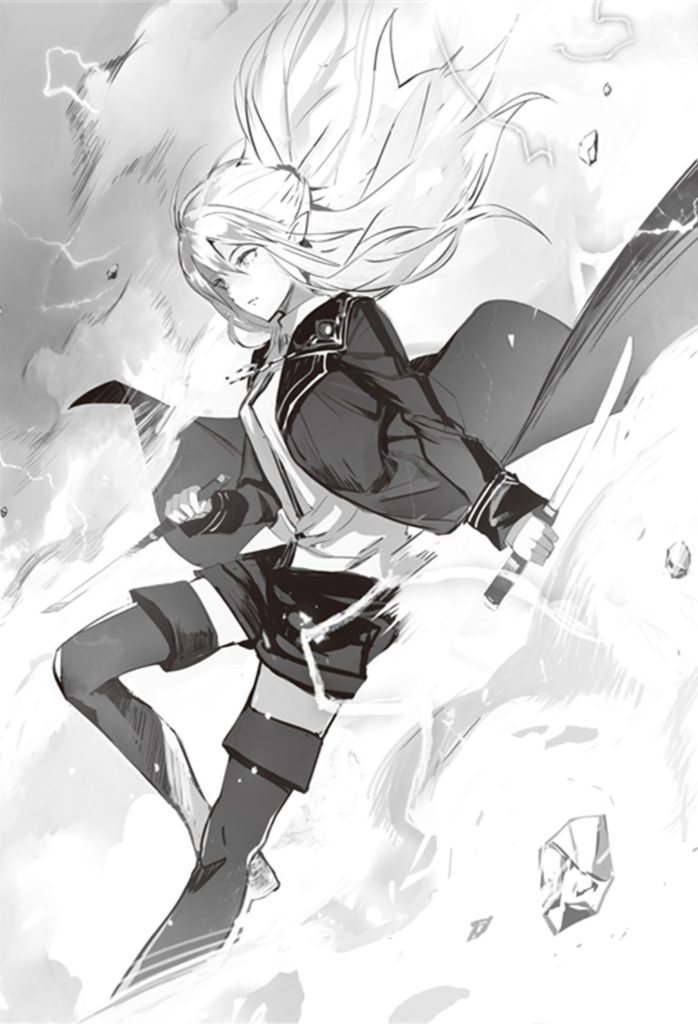 Before the confused guards, the High Elf pointed the red short sword in her left hand towards the remaining monsters. After a few instants, the tip started glowing deep red.

A magic-powered beam of highly concentrated heat ran through the monsters, followed by bursts of flames blooming from the ground. The flames and explosions swept through the remaining monsters: the spell was much more powerful than the ones which preceded it.

The monsters directly struck by the beam melted away immediately: the ones who did not, regardless of how armored they were, were destroyed or burned by the explosions.

The heat beam then vanished, leaving behind a horrifying scene of scorched earth and corpses.

“What were we all ready to die for…?”

“Well, we did reaffirm our convictions.”

The situation continued changing suddenly, so the guards were left quite puzzled. At the same time, though, they were also relieved. While it could be temporary, the threat was now gone.

They could not feel reassured for long, however.

“Hey!! There are monsters running amok in town!! If you can fight, come help us!!”

The guards, flabbergasted by the High Elf and the magic she wielded, were forcefully brought back to reality by a new warning, heard from inside the castle walls.

There were monsters already inside the city: the guards thought that the city’s gates had been penetrated. Closing the gates would allow them to resist for a while, but if a large number of monsters attacked them from behind, the area around the gates would fall into panic. The possibility that the gates fell before being closed was more than likely.

“The only walls or gates breached were here. I do not know the cause, but it seems that monsters suddenly appeared within the city. Their levels are low, but their numbers great: it seems this is happening on a wide range too. I will seal the gap here, so please start subjugating them from the closest location.”

After finishing off the few remaining monster units, the High Elf talked to the guards in a clearly resounding tone.

The monsters she saw while heading to the outer walls were level 100 at most. Their numbers were many, but it was nothing the guards and adventurers could not handle.

“Damn, just what the hell is going on here?”

“Easy there. If what she says is true, we can handle it. Let’s leave this place to her and go somewhere else.”

Some were overwhelmed, some complained, others were relieved. While the reactions were all different, they all took up arms and scattered.