“We’re finally together! It’s been a while, camping outside really takes a toll.”

“My bed…my bed is calling my name…” 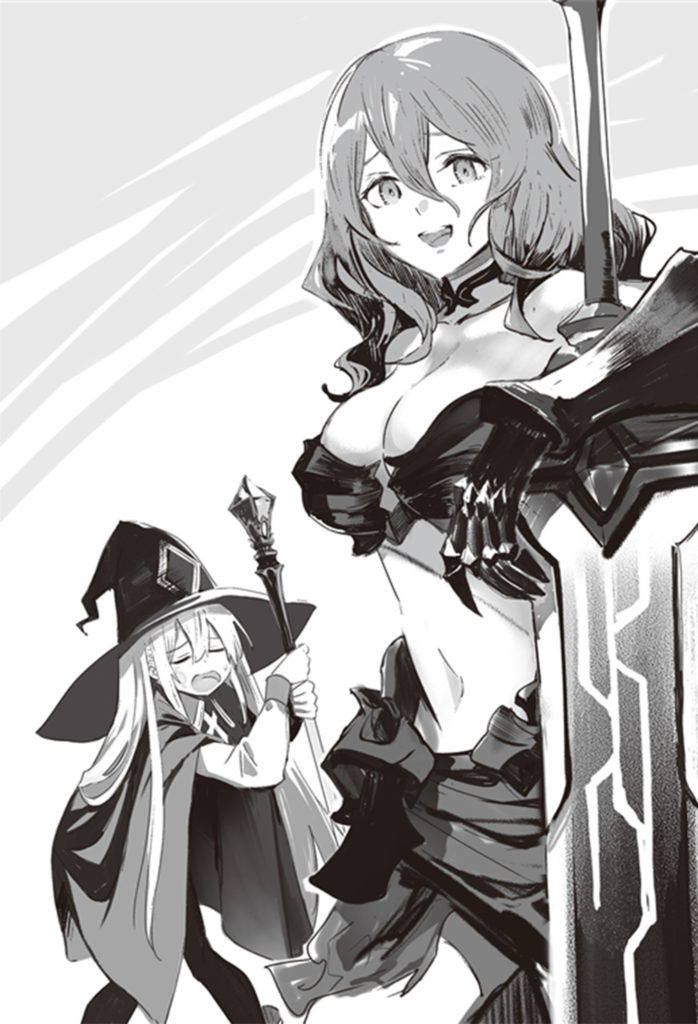 The two newcomers, Sety in particular, looked exhausted. Sety would surely drift off to dreamland the moment she touched her bed.

Shin thought that, since she had been protecting the private area with the Tsumugins, she wasn’t used to camping anymore.

Even so, she looked unnaturally tired.

In the game era they did not camp outdoors often, but even if she was a rear support member, Sety still had stats much higher than this world’s standards. She should get tired much more slowly than the average person.

What would have caused her to be so exhausted?

Sety made it seem like they faced an especially powerful demon, but Filma, on the other hand, did not seem tired at all.

In her travels around the world, she probably camped often. Seeing her pull the dazed Sety’s hand made them look like sisters.

“Let’s stop here for today, then.”

After looking at their state, with a wry laugh Shin materialized Tsuki no Hokora. Schnee then brought Filma and Sety inside.

“I’d really like a portable building like this too. I thought it would be the same as before I was sealed, but after traveling with you guys, not having a bath is pretty harsh.”

“Rather than that, an item that doesn’t make you feel sleepy…”

As Shin commented, Sety wobbled towards him. For whatever reason, she looked about to cry.

“Sety isn’t exhausted because of the camping, she just lacks sleep.”

Filma’s words apparently shook Sety awake: she tried with all her might to stop her from continuing.

“In the first big battle after joining with us, against the evil deity, she couldn’t do much, right? She was super focused though, so I guess she had too much energy left in her. So in reaction to that, she really did her best this time. Day and night, she was out fighting demons. Thanks to that, you won’t find a demon no matter where you look in that country, but those efforts took their toll, and this is the result.”

“I see, so that’s why only Sety looks so spent.”

Shin, convinced by Filma’s explanation, smiled at Sety, who was covering her face out of embarrassment.

She worked that hard because she was worried about Schnee. Shin realized once more that she felt the same way as him and could not help feeling happy.

“I can feel a lukewarm gaze from everyone’s eyes…but more than that, why is big sis Schnee carrying me…?”

Also because she looked very young, Sety’s words and actions made her look like a little girl that tried to act mature.

Sety was thus picked up by Schnee and carried inside Tsuki no Hokora.

“Sety is like the party’s little sister, but Schnee is the one that treats her like that the most, no?”

A mother carrying her daughter. Shin did not finish his sentence, though. They looked like sisters, like Filma and Sety did, but Schnee’s aura made them seem more like mother and daughter.

Shin had set Sety as the party’s little sister, but he thought that even if he hadn’t, her personality would have assigned her to such a role all the same.

Shin and the rest followed Schnee inside Tsuki no Hokora. As announced, Sety was brought to the bath.

Filma also headed towards the bath.

It was still a bit early for dinner. So, Shin decided to progress with the crystal’s analysis, while asking Shibaid, Tiera, and Yuzuha for their opinions.

Unlike Filma, Sety skipped dinner and slept until the morning.

The next day, the party resumed traveling.

“After getting used to big sis Schnee’s cooking, eating in normal restaurants feels kind of lacking.”

Shin’s party departed after breakfast. Sety, sitting next to Shin on the coachman’s seat, whispered to herself.

She was the only one to sleep until the morning, so she found it a bit embarrassing to ride inside the carriage.

“If you cook by yourself, though, you don’t really care how it turns out.”

When the party met Sety again, she was in the middle of cooking.

Shin didn’t recall her having the Cooking skill, but she probably learned in the hundreds of years she spent on her own. At present, it had grown to Cooking IV.

“I heard that big sis Schnee has Cooking IX. I was surprised, but I guess it’s obvious. Her dishes are almost as delicious as master Cook’s.”

“Schnee did eat Cook’s dishes after all. She probably used them as reference and is trying to see if she can’t make them even more delicious.”

Even if her skill level was inferior, Shin thought that Schnee’s cooking might have surpassed Cook’s, as the latter was limited by the game system.

His stomach was already in the palm of her hand. As well as the rest of his body.

“By the way, what happened before we met? I heard a bit before we left, but devils? World Tree? It’s stuff you barely even hear mentioned in this world, but you sure have been involved with both a lot.”

“We didn’t go looking for them, mind you. The devils were in the place we were teleported to. One of them is coexisting peacefully with humans too.”

Former players Hilamee and Masakado, Luxuria and Avaritia, the World Tree and Reforgerer. Shin told Sety about them to share the information with her.

“I guess that being with you means experiencing all sorts of rare events.”

“Let me assure you that none of it is deliberate.”

Shin couldn’t deny it, but resisted the allegations as much as he could, a bitter expression on his face.

“Anyway, since you were alone with Schnee, was there any progress? Out with it, come on.”

“Now that was sudden…”

The question came from Filma: she was probably listening to Shin and Sety’s conversation. She crossed over to the coachman’s seats, eager to take the opportunity.

“It’s like Schnee’s aura got softer than before. That’s what tipped me off. Come on, out with it, and spare no details. Sety, get the other side.”

Kagerou was drawing the carriage, so they just needed to occasionally give it instructions for it to know where to go.

Filma knew the carriage was in good hands, so she grabbed Shin’s left arm so he couldn’t escape.

Sety promptly obeyed and grabbed Shin’s arm as well. Blocked both left and right, Shin had no way of escape.

“Yuzuha be considerate! I want to know what happened! Time to talk!”

“Everyone is worried about you. Here no one other than us can listen”

“Look at that grin on your face! You’re enjoying this, aren’t you!?”

Shin heard some quarrelling going on inside the carriage too.

Conversation from the coachman seat could easily be heard inside. What Shin said to Filma and Sety would be heard clearly by the others too.

Everyone already knew that Yuzuha had made it possible for Shin and Schnee to spend time by themselves.

Shibaid already figured out everything when Shin called Schnee his “wife” in Lanapacea.

Yuzuha had an inkling too, but was curious about the details.

Only Tiera did not say anything, nor move an inch.

From the map and the presence it wasn’t possible to tell a person’s expression, so Shin couldn’t tell how Tiera was looking at the situation.

“Don’t bully Schnee too much, okay?”

Shin realized that Schnee’s prediction was perfectly accurate, as Filma and Sety spoke in unison. He laughed, saying that they sure looked eager.

“Can’t be helped then. Let’s start from after we were teleported.”

Shin started narrating what happened after he spoke with Filma and the rest of the party via Mind Chat.

Inevitably, there was an eruption of cheering when he got the point that they both confessed to each other.

Because it was the moment Schnee’s wish was realized and Shin announced that he would remain in this world.

“And after that you got down to business, right? Right??”

Filma was excited beyond measure, so much that her nose almost touched Shin’s. He leaned the other way, towards Sety, and found her silently yet excitedly blowing air out of her nose, prompting him to go on.

“Whoa, I’m not going to talk about that! It’s too embarrassing!!”

Shin meant to conclude the evening by simply saying that they “became one”, shifting to the next morning, but the pressure on his arms requested otherwise.

Why were they so interested in learning such intimate details? He staunchly refused to speak.

Shin unleashed forehead flicks on both girls to quiet them down.

The quarreling inside the carriage had calmed down as well.

Shin, while thinking that Schnee was probably blushing violently to the tip of her ears, gave instructions to Kagerou about where to go.