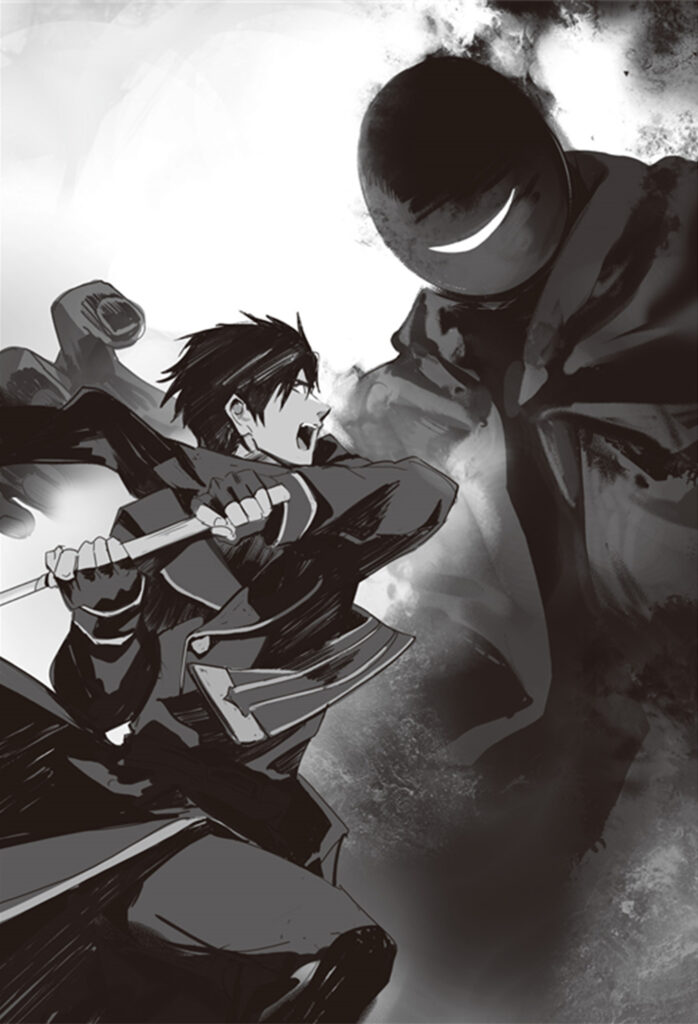 He probably knew about Shin’s fighting style and prowess too. There was no way to tell if Hellscream had acquired this information, but Shin attacked as if it did.

Shin attacked in a way that, even if the monster didn’t react, it would only be damaged, not sliced in two; as the monster dodged, Shin continued as planned and activated a skill.

Shin cast the highest level healing spell, which could heal even unique status ailments, on the Hellscream.

【Mirage Step】required the user to touch the ground, so looking at the user’s feet could reveal which direction it would dodge to. A way to counter it was to make the opponent dodge on purpose, then *place* an attack in the position it was expected to move to. Shin tried it and succeeded.

In the case of normal 【Possession】, the possessed and the possessor would have been separated after a few seconds.

The Hellscream, however, did not even flinch because of the light and attacked Shin instead.

Its four arms stretched out of the robe, wrapped in black and purple light. With them it absorbed the golden light, then its large hooked claws reached towards Shin.

Shin blocked the venomous claws with 『Moonless』. The coldly shining katana reflected the light and drew two arcs in the air.

The devilish smile on Hellscream’s face turned into a grimace of pain.

It probably used physical attacks over the magic it was more proficient with because it had acquired information about Shin. As a strategy, however, it was rather poor.

Shin planned to slash the right arms’ hooked claws with the first slash, then cut both claws and wrists of the left arms with the returning strike.

『Moonless』could affect undead spirit-type monsters like Ghosts and Raised too, so such a result should be inevitable.

Even if the monster had a player as its base, it shouldn’t be able to fill the gap in ability between itself and Shin.

“If this doesn’t work either, I’m all out of options.”

The Hellscream shrieked in pain as it retreated and Shin used his final resort: he activated 【Purification】.

Normally this skill was only used to remove Cursed Gifts, but in this world, it had other effects as it had shown in Tiera’s hometown.

【Cure】 had no effect both before and after the transformation, so Shin did not expect much from it, but maybe 【Purification】 could. Shin reached this conclusion, tried it and—

The Hellscream did not show any changes. On the contrary, in the short time Shin used to cast 【Purification】 its arms reformed.

Shin and Filma had no other options. He nodded to her and changed his grip on 『Moonless』. He activated a skill and the katana’s steel-colored blade glowed white.

It was one of the skills that caused extra damage to certain types of monsters, the one especially effective on undead spirits.

The Hellscream probably sensed the blade was dangerous: it concentrated power in its hooked claws to the maximum and prepared to counterattack.

He used 【Ground Shrink】 doing the same movements as before, but at a much higher speed.

Overwhelming speed, almost like instantaneous movement. The Hellscream had no time to move its hooked claws.

One slash on the monster’s defenseless body and everything would be over.

Just when the blade was about to hit—

Such a voice reached Shin’s ears.

There wasn’t enough time to say those words. No voice actually made the air vibrate. But Shin was sure that it was the voice of the man before he transformed.

Are you in there?

Is your conscience still there?

Since Shin was the one accelerating, he could have time to act before the attack connected.

The hesitation in his heart transmitted to his sword arm.

The blade that was about to cleave Hellscream in two stopped.

The monster’s mouth twisted into an arc. Its iconic scream, which had brought so many players to ruin, resounded in the surroundings.

“Yeah, I should have expected that.”

Shin whispered to himself while hearing the scream.

Hellscream probably had the ability to use the player’s voice to make the opponent hesitate. It could be a trump card against opponents it thought were too much for it.

Unfortunately, the scream was just noise: Shin could cut down the Hellscream at any time. He was slightly irritated, however, by the Hellscream gloating about its successful move.

Thus Shin decided to teach the monster a lesson.

“You better watch your back.”

Shin pointed behind the monster, to show that he wasn’t paralyzed at all.

Shin’s presence and his skills attracted Hellscream’s attention too much. Shin was not fighting alone, after all.

The Hellscream turned towards the source of the voice. There it found 『Scarlet Moon』’s blade, swinging at a speed it could never hope to dodge.

Filma specialized in cutting down her opponents head-on.

However, she could erase her presence and ambush them with ease too.

Filma’s own ability and speed, paired with the speed boost granted by the magic power output of her equipment. Together, they would let her easily ambush the Hellscream, focused completely on Shin.

The Hellscream was cleaved in half, without even a chance to let out a final scream, then vanished in midair.

“It won’t leave a corpse behind?”

Shin whispered to himself while looking at the empty space where the Hellscream was.

It wasn’t an unusual way for an incorporeal monster to die, but because of the way it manifested, Shin thought that something would have remained.

“Shin, this isn’t the time to get all sentimental.”

Shin looked closely in search of any remains, then Filma called him.

He looked in the direction Filma was looking at and saw the horde of Garmags and Kikiuz. Durgin was still collapsed on the ground.

“You’re right. Let’s call Sety and wipe them out. Durgin had a sort of 『Collar of Subjugation』 on, so I’ll try to remove it.”

The Garmags and Kikiuz were large in number, so Shin decided that it was Sety’s turn, since she specialized in large scale offensive spells.

Shin contacted her via Mind Chat, asking her to come with Yuzuha, while Schnee would stay in Passner, in case anything happened.

Sety, who arrived riding on Yuzuha’s giant form, was very gung-ho about the task she was assigned. The Garmags and Kikiuz didn’t leave the contaminated area created by the black clouds, so she said she would erase them from one end of the area to the other and started attacking. The area was very wide, so Filma went with her to get rid of any survivors.

Shin watched Sety and Filma go, then turned towards Durgin.

During the fight against Hellscream and afterwards, it didn’t move at all. 【Analyze】 showed that it was still affected by 【Brainwash】.

Its state was a little different from the effect of the 『Subjugation Collar』.

Its aura, or rather, the evil air it emitted was the same. When Shin touched it, the collar emitted a faint metallic sound and shattered.

Shin used 【Heal】 and Durgin regained HP and its status recovered. It didn’t look weakened as it did when it had collapsed.

Durgin stood back up, looked at Shin for a while, then its body suddenly started glowing. The light then gathered in front of the monster.

“This light…I’ve seen it recently.”

As Shin expected, the light formed a gemstone, which dropped into Shin’s hands.

Shin looked at the gemstone. He knew no one would answer, but couldn’t help but ask all the same.

He had predicted that he would have had to use Baomultan’s treasure gem on Durgin, but Durgin gave him a treasure gem instead.

The two treasure gems were probably a pair, but Shin had no idea how to use them.

They could be used as materials to craft items, but since he already equipped powerful gear, there was no need to use them for something like that.

Durgin had nothing else to do there, apparently: after roaring once, it soared in the sky and flew away. The black clouds did not form behind it any longer. It would probably be safe to leave it alone now.

“Sety and Filma don’t seem to be having problems, so what’s left is…”

Shin looked at Sety launching large scale destruction spells in the distance, then looked at the shattered collar.

He predicted that the collar was the cause behind Durgin’s 【Brainwash】 status.

Shin picked up one of the larger fragments and examined it.

Players with creation-type jobs could see the name of the creator of other items. The hawk emblem Shin put in his creations had to be chiseled manually, but the creator’s name appeared automatically.

And the collar showed it.

Maybe because the collar was broken, the creator’s name had turned into unreadable gibberish.

Since a name was there, it was clear that the collar had been crafted by someone.

The creator might have crafted it while under someone else’s control.

Or maybe they had created it of their own free will.

In any case, there was surely trouble ahead.

If the collar could be mass-produced, the entire continent would fall in chaos and turmoil.

The words left by the man and a dangerous collar. It was something that needed to be investigated not by a small party like Shin’s, but by a large organization like a country.

“I should talk about it with Schnee first.”

Fortunately, during their adventures, they had built connections with royals and powerful merchants. If they used them, they might be able to do something.

While thinking this, Shin contacted Schnee via Mind Chat.