Then, I detected a sign of what seemed to be another horde of ogres.

And this time, there were three reactions much larger than the normal ogres.

Two were only slightly larger, but the other one was much larger.

They’re but small fries to me, but Asha and Kusel will have a hard time with them.

“Asha, Kuzel. Can you two sense that?”

I said with a serious expression, and they nodded their heads.

“The Ogre King and two Ogre Generals who are probably his cronies. I don’t mind dealing with them…”

“Sure, if it looks like Asha and I are going to be in trouble.”

After discussing amongst themselves, Kusel asked.

“Yes, please. Fighting the two generals and the king while also having to deal with the other ogres would be…maybe not totally impossible, but a little overwhelming to say the least.”

A few moments later, a horde of ogres appeared in front of us.

Both ogre generals were holding a rusty weapon like a butcher knife in one hand, and the ogre king was holding a long sword in one hand as well.

Kusel muttered when she saw them.

“This is definitely not a quest for an A-rank.”

“You can say that again. Even if an A-rank party were to take on the challenge, they’ll only be seeking their doom.”

Asha beside me was nodding in agreement.

An A-rank inching on S-rank, really, what a load of crap, this is a straight-up S-rank quest.

Well, I heard there are no S-rank adventurers in this country, so they were probably waiting for an A-rank party to take it.

Seeing us leisurely thinking about this, the ogres ready their weapons.

The ogre king made a gesture as if ordering his subordinates to attack, and they all attacked at once.

“Well then, I’ll take care of the small fries, so I’ll leave you two to deal with those three.”

Kusel and Asha sneakily ran through the approaching horde of ogres to the ogre generals and ogre king positioned at the back.

The ogres, noticing that they’ve gotten past them, tried to get back, only to be stopped by an invisible wall.

They hit and punched it, but the invisible wall didn’t budge.

It’s a barrier that I personally erected, no friggin’ chance it will break from just that.

“I’ll be the one entertaining you ugly sons of bitches.”

The ogres reacted to my voice and turned around. There were about ten of them.

“I won’t tolerate you getting in their way.”

I lightly released my intimidation to attract their attention. If I was too intimidating, they might run away, so I kept it to a minimum.

And just as I had hoped, the ogres began to close in on me——and then attacked all at once.

Some clenched their fists, some held thick fallen trees with both hands, and some held large rocks.

This time, I decided not to draw my blade, but to use only magic and martial arts to fight.

I parried the fist strike, and with a twisting palm strike to the unguarded belly of the ogre, shot a large hole through, killing it instantly.

I evaded the one with the huge tree by crouching down and releasing a mass of compressed air with wind magic to blow it away. It should have just blown it away, but perhaps the force was too strong, and like the first ogre, a large hole appeared in its belly.

As I was saying that, huge chunks of rock came flying at me from both sides, and at the same time, a huge tree swung down from behind me.

The rocks came at me so fast, but a moment later they collided and crushed each other, and the huge tree swung down on top of them.

But I was already gone, and the ogres looked puzzled.

As I said this, I unleashed a compressed mass of mana——a magic bullet from above and shot two ogres right between the eyes.

The ogres, seemingly angered by the defeat of nearly half of their comrades, approached.

Ogres appear to be on the more intelligent side compared to other monsters, but they showed no signs of running away.

Makes sense, because even if they wanted to, they can’t…

“Well, just chalk it up to bad luck.”

I defeated the approaching ogres in an instant and decided to release the barrier to watch the fight of those two.

Asha and Kusel seemed to be putting up a good fight despite the two-against-three handicap.

Kusel draws their attention and Asha takes advantage of the opportunity to attack.

However, Asha’s knife could not penetrate through the thick skin of the ogre general and ogre king, and Kusel seemed to have no chance to strike an effective blow.

Well, they’re up against two A-rank ogre generals and an S-rank ogre king, both of which are nothing to scoff at.

Although both Asha and Kusel had become stronger, they were not easy opponents to defeat.

But even so, Kusel seemed to be putting up a better fight than expected, perhaps thanks to the results of her training with Zero.

Kusel dodged the attack of the ogre general and swung her sword with a spirited voice.

The ogre general, perhaps not expecting her to avoid the attack, reacted too late, and its right arm was slashed off.

The ogre general screamed out in pain.

However, the other ogre general was about to swing its large butcher knife at Kusel who was now defenceless from behind.

I was about to make a move, but then I noticed Asha moving and decided to stay put.

Asha, while keeping the ogre king firmly in check, threw her knives and pinned both legs of the ogre general, that was aiming at Kusel’s back, to the ground.

As soon as she noticed Asha’s restraint, Kusel dove within range of the ogre general, the one with the arm chopped off, raised her sword, and sliced the ogre general in two.

Kusel shook off the blood on her sword, and stared at the ogre king, and the ogre general, whose legs were pinned to the ground. 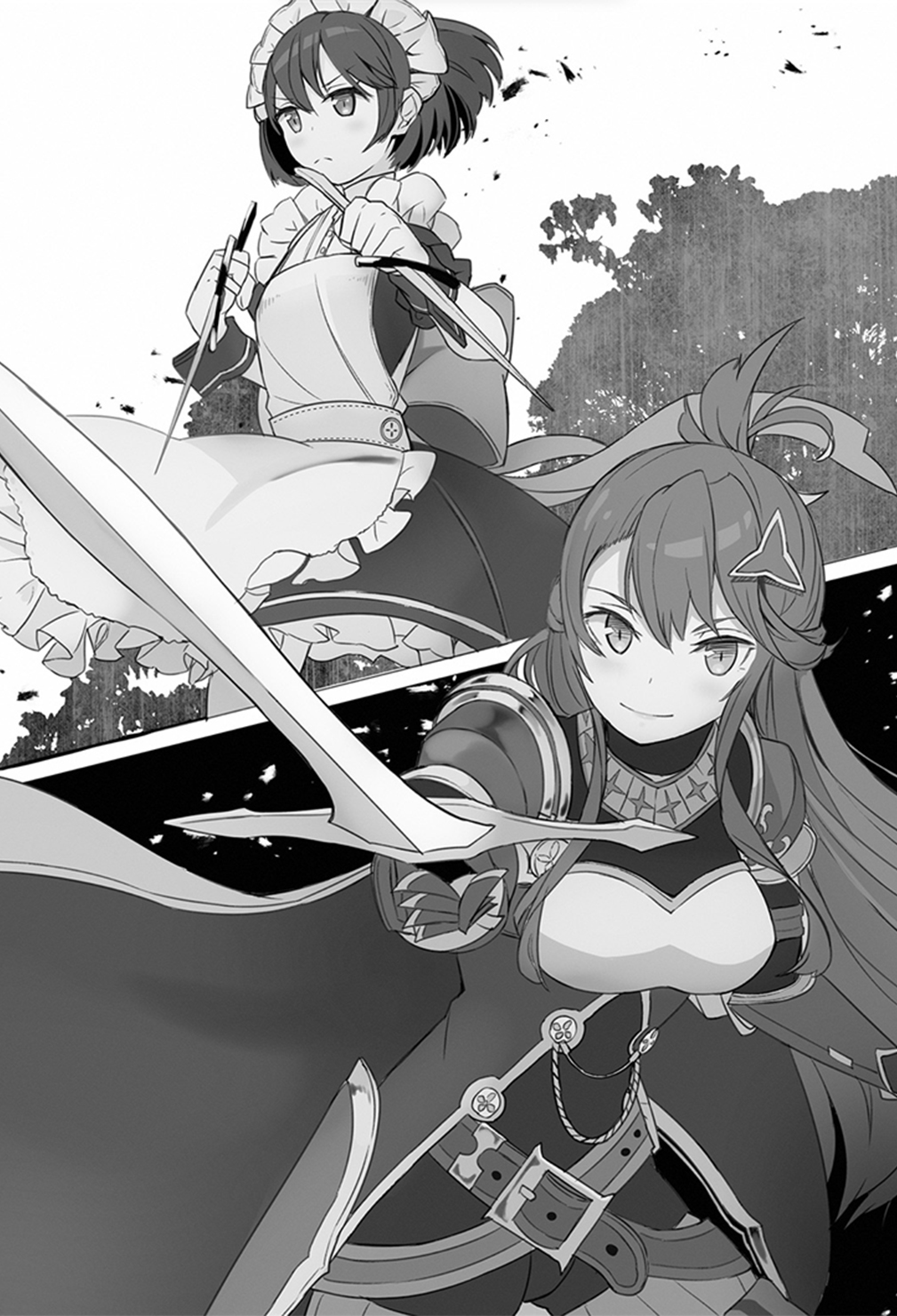 Their coordination just now was nothing short of brilliant.

In that split second, Kusel understood what Asha was trying to communicate and firmly finished off the enemy. How I would like to praise them right now, but the battle is still ongoing.

Besides, both of them seemed to be on their toes.

The ogre general pulled out the knives stuck in its legs to keep it still, and pointed its weapon at Asha and Kusel.

The ogre king also seemed to be angry at the fact that one of its ogre generals had been slain.

They both seemed to be raring to go, Asha and Kuzel on the other hand also seemed to still have some fight left in them from what I can see.

“We’re taking out the general first.”

Seeing the two of them just standing there, the ogre general, perhaps annoyed with their reluctance to take action, swung its huge meat cleaver at them.

As if she knew it was going to happen, Asha threw the knife she was holding at the ogre general’s eye.

The ogre general, covering its eye where the knife had pierced, screamed in pain.

Kusel wasn’t going to miss this opportunity and she closed in with her weapon.

The ogre general noticed Kusel, but the distance was too close to react.

She was very close to beheading the ogre general——but the ogre king’s long sword came homing in on Kuzel from the side.

Kusel noticed it thanks to the outcry.

She quickly guarded herself and avoided a direct hit from the blade, but was blown away by the impact and rolled on the ground.

However, she quickly regained her stance, and Asha immediately rushed over to her.

The two quickly jumped back and avoided the long sword that the ogre king swung at them.

Asha, seeing the long sword thrust deeply into the ground, broke out in a cold sweat.

Perhaps she was thinking about what would happen if she took a direct hit. Her legs were trembling, her mind must have been stricken with fear.