Sullivan started laughing all of a sudden, so Lowen frowned.

He then noticed that Sullivan was now wearing a silver bracelet and looked at him, wide-eyed.

“What’s that bracelet!? Men, restrain him!!”

Lowen did not know what the bracelet really was, but he was sure it was a magic tool — so he immediately ordered his subordinates to move.

Sullivan roared and swung his arms.

He only swung them wildly, but one of Lowen’s subordinates was tossed against the wall.

Lowen glanced at the soldier thrown against the wall, then drew his sword.

He stepped next to Sullivan in an instant and slashed him diagonally.

Sullivan then swung his arms in Lowen’s direction.

Lowen parried with his sword and jumped backward to kill the momentum.

The other soldier pierced Sullivan with his spear, exactly under his armpits: the spear went through the ribs and reached Sullivan’s heart.

Even with his heart pierced, Sullivan did not die: he forcefully snapped the spear with his arms.

“You dare wound my noble self!? I will have you all hanged!! Mark my words!!”

Sullivan broke through the window and jumped out.

The soldier who stabbed Sullivan with his spear drew his sword and started giving him chase.

Lowen, however, stopped him.

“There’s no need to. Take care of his wounds instead.”

The soldier looked at the shattered window, then his comrade slumping against the wall.

“It’s fine. There was an unexpected accident, but things are largely proceeding as planned…we wanted to let him escape from the start, anyway.”

The soldier cocked his head, confused.

Lowen shook his head and sighed.

He heard clamoring voices from the hallway. The residents of the Nommes house heard the commotion and started gathering, naturally.

Lowen headed towards the hallway, to explain the situation to the head of house Nommes.

“Let’s leave the judgment to the young master…if only he let himself get caught, he would have been judged as a human being.”

Sullivan cursed as he ran through the town at an incredible speed.

【Herakles】, magic tool and national treasure of the Lamperouge kingdom. Its power boosted the wearer’s physical and healing abilities.

There were many magic tools that boosted physical abilities, but 【Herakles】 was especially powerful.

As long as 【Herakles】 was worn, the user would not die even if their head was smashed or their whole body was stabbed by spears. The wearer became immortal and could fight hordes of enemies on their own.

Additionally, unlike other magic tools, 【Herakles】 did not cause any fatigue to the wearer, so it could be used without limit.

When the kingdom of Lamperouge was founded, the first king fought with 【Herakles】, spreading his fame as an immortal warrior, leaving legends such as his battle against armies of thousands on his own.

“Who do you think I am, you miserable peons!? I am the fated ruler of this kingdom!! Everything in this kingdom belongs to me!!”

What he had left was only the old silver bracelet on his left hand.

“Nothing will stop me now! Yes, a country where I am not the king cannot be right!! I have no need for it anymore!!”

Sullivan’s heart sank deeper and deeper into a swamp of ill intent: his uncontrollable rage and hatred painted the scenery before him red.

The people in the streets, alerted by his screams, quickly opened a path for him, but he did not even see them anymore.

“I will kill you, Dyngir Maxwell!! Your father Dietrich too!! I’m going to take your two heads as a gift and turn to the empire!!!”

If the margrave of the eastern province, guardian of the border, was killed along with his son and heir, the eastern territories of the Lamperouge kingdom will surely crumble.

If the empire took the opportunity to invade, the whole country was going to fall.

“Yes!! I will become a hero in the empire!! The country that abandoned me will be burnt to ashes and a new age will be born!!”

Sullivan’s heart had no more traces of love for his homeland: there was nothing but hatred and a desire for revenge upon those who caused his life to go out of control.

(First of all, I must regroup and…yes!! Zaill!! I must punish that man for introducing me to those useless assassins!)

Sullivan was now headed to the residence Zaill told him he could use as an “emergency shelter”. It was rather far from the town, but, thanks to 【Herakles】, he could reach it in about one day.

“Zzzzaaaaaaiiiillll!!! Just you wait…!!! Your king will punish you personally!!!”

The journey to the residence would normally take days, but the bracelet’s full speed allowed Sullivan to arrive by sunset.

The residence was located in an area known as a summer resort in the eastern province: among many other noble residences, it stood taller and more imposing than any other. Its garden was large as well, making it look like a villa fit for royalty.

“Hmph, if he could build a mansion like this, he must have quite a lot of finances at his disposal. Looks like I might be able to make good use of you, Zaill…”

Sullivan opened the iron gates and adamantly made his way inside.

The residence was very large, but there was no sign of security anywhere. Not even servants or maids could be seen.

“…I expected to find more security, though…could he have deserted the place…?”

Sullivan, perplexed, walked towards the entrance.

Before he could reach it, however, the door opened from inside.

“Whoa, you got here earlier than expected.”

From beyond the luxurious door leading into the residence emerged Sullivan’s most hated man, Dyngir Maxwell himself.

“Dyngir Maxwell!! Why are you here!?”

“Why…? Why can’t I be in my private residence?”

I shrugged at Sullivan’s angry shouting.

The residence we were in was one of my private properties.

If someone was to be accused, it was him for entering without permission — but I knew that such reasoning wasn’t going to work on the idiot standing before me.

“Your private residence!? That’s impossible!! This is Zaill’s…”

“You called for me, Lord Sullivan?”

A man appeared from behind one of the pillars in the entrance hall.

“Zaill!! What is the meaning of this!? Why is Dyngir Maxwell here!?”

The well-dressed man, his composed, gentlemanly expression unperturbed on his face, replied to Sullivan’s question as if appeasing an unruly child.

Sullivan was hit with the realization.

He finally understood in what place he had been lured in.

That the man called Zaill was not his ally.

“Betrayal? I am afraid that is not correct. In the first place…”

“Enough already, I’m sick of hearing you talk like that, could you stop?”

I couldn’t stand to watch that farce anymore, so I interrupted the man.

“Your job is over now, so you can talk as you usually do, Clown.”

“Ooh, is that so…heehee…let me talk normally then, sir.”

The atmosphere of the man Sullivan called “Zaill” changed completely.

His polite manners and gentlemanly features crumbled away, leaving a vulgar-looking hoodlum in their place.

That was the true appearance of the man said to possess one hundred faces, Zaill — Clown.

(This face might be a fake one too, though.)

Sullivan was completely confused by the drastic change in Zaill’s appearance: he had instantly changed to a completely opposite face.

I understood how he felt though: when I saw it for the first time, I was speechless too.

“Heeheehee, the man named Zaill never existed in the first place. My name is Clown, I am just a poor swindler.” 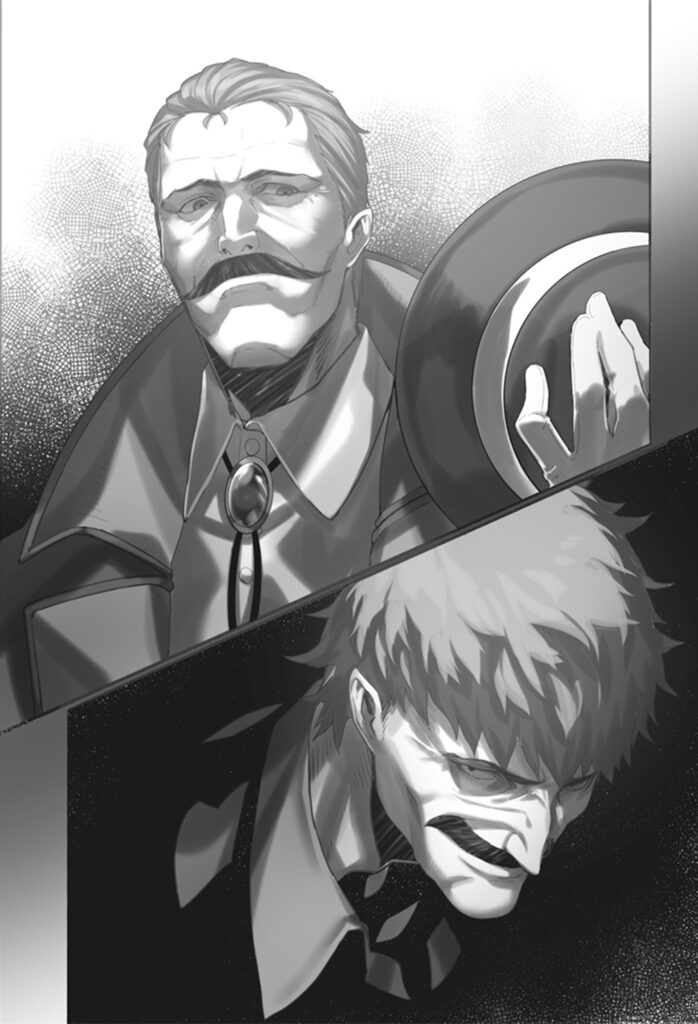 “Yes sir, you have been deceived from the start. I approached you as Zaill, told you about the 『Fangs of Steel』, said that you had a chance to become the next Lord Maxwell…all to lure you into a trap. Heeheehee.”

What emerged from his expression now was humiliation and suspicion.

“You haven’t realized it even now? You fell for it, hook, line, and sinker. It was a ‘test’, to see if you were worth the title of Baron Nommes. And you failed it spectacularly! You spat and stomped all over it! Heeheehee!”

Sullivan fell silent after Clown’s mocking words. Then, after a brief silence, he exploded.

“D-damn youuuuuuuu!!!! You will pay for deceiving meeeeee!!!!”

The bracelet on Sullivan’s left arm gave a dull glow.

With a booming sound, as if the very earth exploded, Sullivan jumped at Clown.

“You, test me!? Test this kingdom’s crown prince!? This country’s rightful ruler!? Know your place, scuuuuuuuuuum!!!”

Clown lightly stepped aside, revealing the silhouette of a person who faced Sullivan in his place.

“Is it my turn finally?”

The silhouette behind Clown was the lance maiden, Shana.

Shana smoothly ran past Sullivan, as she thrust the hilt of her lance between his legs to make him tumble.

Sullivan’s legs flew up in the air and he crashed headfirst against one of the entrance’s pillars.

“Over already? How boring.”

The marble pillar shattered, its debris falling over Sullivan.

“I-it couldn’t be helped! It’s this man’s fault for being too weak.”

Shana spun her lance and struck the floor with the hilt.

She parted her silver hair, showing a dissatisfied expression on her handsome face.

“I can’t expect him to be as strong as you, but I wanted to see some more grit, at the very least.”

“Well, looks like he has enough grit to stand back up though.”

Sullivan tossed away the debris crushing him and stood up ferociously.

There was blood on his head, but the wound seemed to be closed already. His recovery abilities were clearly superhuman.

“It can’t be. I respect tough men, but…how can he stand up again after that?”

At the speed Sullivan crashed against the marble pillar, his cranium should have been shattered, his neck snapped. It was normally impossible to stand back up after such damage.

“It’s the royal family’s secret treasure, 【Herakles】. The bracelet of the immortal hero. Honestly, how did you manage to steal it?”

Even if Sullivan was the crown prince, it wasn’t something that could have been easily taken outside.

It was the first king’s heritage, after all: more than just a magic tool, it was a symbol of the royal house’s authority.

(I didn’t hear about it being stolen, though. Did someone hide the fact? Could he have allies among the nobles in the capital…?)

The only nobles that could have managed to sneak a national treasure out of the capital were Duke Rosais or nobles with similar authority.

For a moment, I considered the possibility that someone secretly gave Sullivan the bracelet in order to dispose of me, but I quickly discarded it.

I couldn’t think of any major nobles in the capital foolish enough to give a national treasure to this idiot, even for the sake of killing me.

“Well, whatever. Stand back, Shana. I’m going to deal with him.”

“Mph! Didn’t you say you would leave him to me?”

“This is the end of our little quarrel. I have to take responsibility, right?”

Shana, though disappointed, retreated. Clown, on the other hand, had already run off somewhere.

“Time to settle the score, then. You want to kill me, right? Do your worst.”

Sullivan leaped towards me, roaring like a wild animal.

I drew my sword and faced the man who stole my fiancee in our final battle.