A body as plentiful as the goddess of prosperity, Eliza.

A small body and a myriad of techniques, Sakuya.

A thin figure with yet thick, supple curves, Kanna.

I was making love with these four women repeatedly, one after the other, enjoying their bodies as my desire commanded.

After all, the old man gave me his warning: my days of rest in my private residence were coming to an end.

The best way to conclude was, naturally, a banquet with my beautiful ladies.

“Okay, I’ll do you from behind next. Kanna, put your hands down.”

It was the first night I made love to Kanna.

She was Sullivan’s wife, so I honestly didn’t expect much, but her body was more balanced than I thought: there was pretty good affinity between us.

I was worried that losing her emotions could also have turned her frigid, but when I tried this and that she showed deliciously tender reactions.

(I thought Sullivan might have planted some sick habits in her, but looks like I worried for nothing.)

Reborn from a shattered personality, Kanna was as innocent as a newborn: she obediently absorbed anything I taught her.

I felt the guilty, immoral pleasure of teaching such bad things to a child and my back shivered with excitement.

Snatching someone else’s woman felt strangely exciting. Especially if she’s the woman of someone I dislike.

(Hey, Sullivan. I bet that felt good, to steal my woman and make it out like I’m the bad guy. I bet you felt like a damn hero.)

As a result, he lost his rank, his woman, and even his youth. I couldn’t help but smile.

I took the broken, pure white maiden and shaped her my way.

To freely mold a woman as I pleased was something close to supreme bliss.

“Hehe, young master…don’t give all your attention to Ms. Kanna, please.”

“…newer members should let us veterans take the lead.”

I casually switched to Shana, who was trying to sneak away.

The night was still young: I was going to indulge in the banquet till I was completely full.

My relations with them thus continued for several more hours.

Our banquet of love started immediately after dinner and continued for seemingly forever, but it too eventually reached its conclusion.

We were lying on my king size bed, our energies completely spent.

“Aaah…that was great. I haven’t felt this satisfied in a long while.”

So I whispered, my head buried in Eliza’s ample bosom.

Eliza was gently caressing my head.

“Worked hard? I’m sure I can go harder, though?”

“I’m not talking about that. So many things happened these past few months. You must be tired, don’t you?”

The series of events starting from my broken engagement.

It first triggered Sullivan’s disinheritance and the attempted assassination then the gradual fall of the Lamperouge royal family and confusion in the central government.

I knew that these problems weren’t the end of it.

“Things are only going to get busier. I have rested plenty, so I’m not going to complain because of this much”

“Really…please do not push yourself too hard.”

I was there flirting with Eliza, when Kanna suddenly slipped out of the bed and tottered towards the window.

She did not answer me, however, and instead removed the window’s bolt and lock to throw it wide open.

A chilling wind blew into the room. Our hot bodies were cooled down instantly and Eliza shuddered.

Kanna was stretching her hands towards the sky.

Something then emerged from the darkness and landed on her white arm.

Sakuya got up from the bed too.

The owl spread its wings, as white as Kanna’s hair.

Both being white, they got along well…? That was surely not the case, but the owl pecked gently at her cheek.

“We use that owl for emergency communication. Kanna, give the letter here.”

Kanna obeyed Sakuya’s order, removed the small paper tube tied to the owl’s feet and brought it to us.

Sakuya spread the letter and quickly scanned it.

Sakuya raised her eyes from the letter and looked at me.

The sharp look in her eyes was proof enough she was telling the truth,

“The emperor of the Baal empire has passed. Apparently, the cause of death is illness.”

The words, related by Sakuya in a grave tone, resounded in my head.

House Maxwell had fought against the eastern Baal empire multiple times. I had heard rumors that the emperor was ill, but I did not know it was something so serious as to cause such a sudden death.

The emperor had three sons, but had not named a successor yet. It was easy to see that some sort of internal strife would arise.

“…I see, so this is what it looks like to see history in motion. Interesting.”

The king of Lamperouge falls ill, then things start to move in the Baal empire. The sparks of war are waiting to be lit everywhere.

So this was history.

Ages of tumult are born this way.

I was now living in a turning point of history’s flow.

I sincerely thought so.

My time had come.

I was going to swallow everything, all events, all commotions, and turn them into sustenance for me and house Maxwell.

I stood up, barely able to contain my ferocious excitement, and faced the window.

The sun was about to rise. The land, still immersed in darkness, was slowly seeing the light again.

I looked at the sun, rising from the east, and pointed towards the direction the empire was supposed to be.

“Yes, this is my time!! Kingdom, empire, you better shake in your sleep!! A new era of war and turmoil is coming, and I will reign over it all!!” 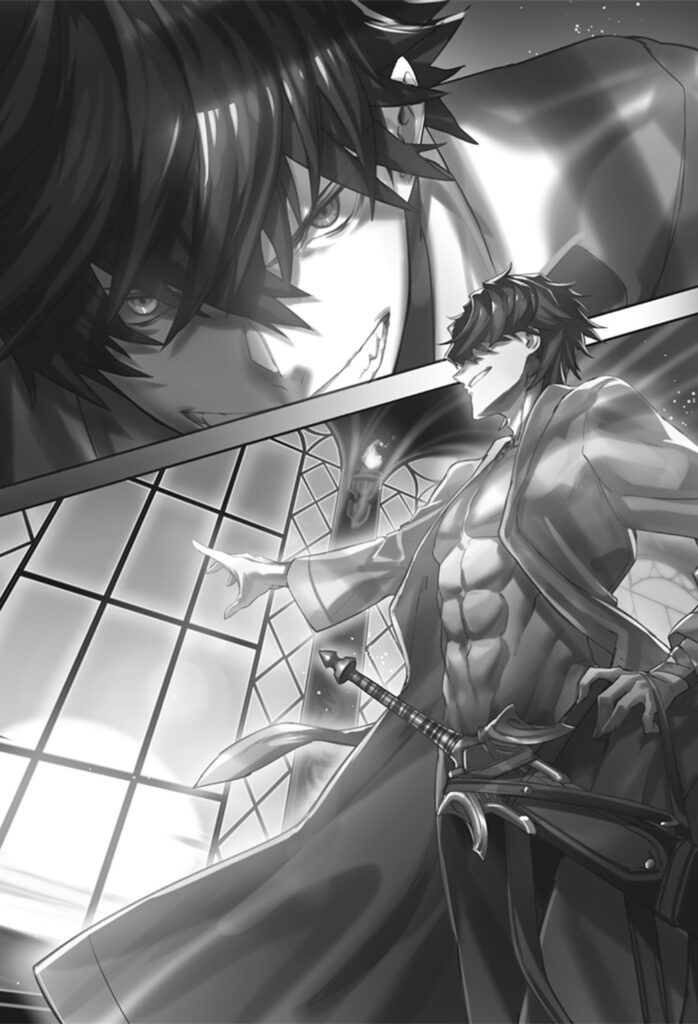 I’m a bastard, but this era is worse!

This era of idiots who couldn’t preserve its peace!!