Several days have passed since Reito’s arrival in the Adventure City Lunot.

He was now living in a lodging managed by the guild, reserved for low-rank adventurers.

He planned to rent a room at an inn at first, but in that season, the city was visited by hordes of tourists, so he couldn’t find any vacancies.

The reason for the influx of tourists was the upcoming Hunting Festival.

All of the city’s adventurers’ guilds participated in the festival: selected adventurers from each guild would hunt down monsters released throughout the town, competing against each other.

The guild that exterminated the most monsters would be crowned the winner and receive hefty financial aid from the kingdom. The adventurer with the highest score also received the right to be promoted to the next rank.

Only adventurers ranked C and above could participate in the festival however. Reito was therefore excluded.

The Hunting Festival thus attracted crowds of tourists to the city: despite not being short on money, Reito was forced to stay in the guild’s lodgings.

“Phew…drinking juice in the morning is the best!”

Reito was having breakfast in the guild’s tavern, taking it easy, without taking requests.

During his years in the Abyssal Forest, he fought monsters almost every day: he could now lead a more “human” lifestyle, so he reveled in it.

Seeing him laze about every day, however, Bal sighed.

“Listen here, boy…you came here and became an adventurer, how about putting in some work? Even if you got a large reward, you’re being way too lazy.”

Bal eventually lost her patience and put a piece of parchment on Reito’s table.

“Here, time to work!! I’ve got just the thing for a greenhorn!”

What Bal placed on the table was one of the requests posted on the bulletin board.

Reito checked the contents: the request involved picking Crescent Moon Grass, a type of medicinal herb he used to grow in the residence.

“The reward’s fair. You can find that herb anywhere, but gathering so much can be troublesome. You better get going after you finish eating, and don’t come back until you’re done!”

“Hehe…you’re looking down on me, GM. I can complete a request like this in a snap.”

Reito took the request note and stood up.

Bal was relieved to see Reito was finally going to work, but for some reason, Reito did not head towards the exit…but towards the reception.

“Excuse me, I completed a request, can you confirm it for me?”

“Yes, of course…oh, collection of medicinal herbs, I see. Please place the herbs on the counter.”

Reito gave the request note to the receptionist, then opened his Storage subspace and took out 30 Crescent Moon Grass tufts he had picked up in his days in the Abyssal Forest.

“Thank you very much.”

Reito passed next to Bal, standing there without a word, and returned to his seat. He then wiped the sweat from his forehead.

“Boy, are you trying to pick a fight with me!? If you had them from the start, just say it!!”

Bal was about to poke Reito’s head, so he crouched to dodge it.

She was fairly surprised to see him easily avoid an attack from behind, but then let out a deep sigh.

“I thought seriously about it, actually. If I already have the items specified in the request, I just need to deliver them. What’s the problem?”

“Very well. I have some business to attend to, so if you’ll excuse me.”

Reito finished drinking his juice, quickly bowed to the disappointed Bal, and left.

His destination was a wide space without people around: he planned to test the broadsword he made from the Troll’s weapon. He wouldn’t use the training grounds behind the guild because he didn’t want other people to see him.

Reito decided to go to the alley where he encountered the thieves a few days before.

“This place should work. I can’t sense any human presence… okay, let’s start the experiment.”

Reito lifted the broadsword and swung it widely.

It was heavier than the broadswords he could create with Iceclad Sword, but he could wield it without particular trouble. After making sure of that, he tried using an Alchemist skill on the blade.

Reito recalled the memories from his past life, then activated Metal Transmutation.

Metal forming the broadsword changed into carbide tungsten, a metal not naturally present in this world. Reito confirmed that the transmutation succeeded via the change in the metal’s color, then activated Matter Reinforcement to raise its durability.

The sword’s weight increased considerably because of Matter Reinforcement, but Reito could still handle it without too much trouble, thanks to the Tech Skill Might.

Once the process was finished, Reito put the sword back into the Storage subspace.

If kept outside, the skills’ effects would eventually run out, so he decided to take out the sword only when strictly necessary, as time stopped inside the Storage.

“Now I want to try hunting monsters with it…”

Reito decided to go outside the capital in order to test the capabilities of his new weapon. He was about to leave the alley when he heard a noise coming from the back.

The noise came from inside a wooden crate: it looked like there was a living creature inside.

“It’s coming from there? Did a cat get in or something…?”

The crate was big enough for a human to fit in. Reito, curious, lifted the lid and peeked inside — and found something very unexpected.

The crate contained a young girl, her arms and legs tied with rope, her mouth gagged.

Reito immediately lifted her out of the crate, untied her, and removed the gag: her clothes were dirty, but she did not have any visible wounds.

The girl was wearing a bizarre attire, which looked like a one-piece, so Reito found it awkward to look at her. It might be problematic to stare at her like that.

Reito was wondering what to do when the girl flashed a bright smile. It was hard to imagine that she was trapped in a crate until moments ago.

“…thank you very much. I almost ended up shipped away.”

Reito kept greetings and introductions to a minimum, prioritizing taking the girl to a safer location.

He was curious about her circumstances but judged it risky to stay there. As they walked away, Reito asked her a question.

“So…why were you tied up in that crate? Were you kidnapped…?”

“…I don’t know. When I woke up, I was already packed inside.

The girl did not seem to know what happened either.

She had been stuck in the crate until Reito freed her apparently. She bowed politely and thanked him again.

“Thank you so much for saving me. My name is…Kotomin. Can you tell me yours?” 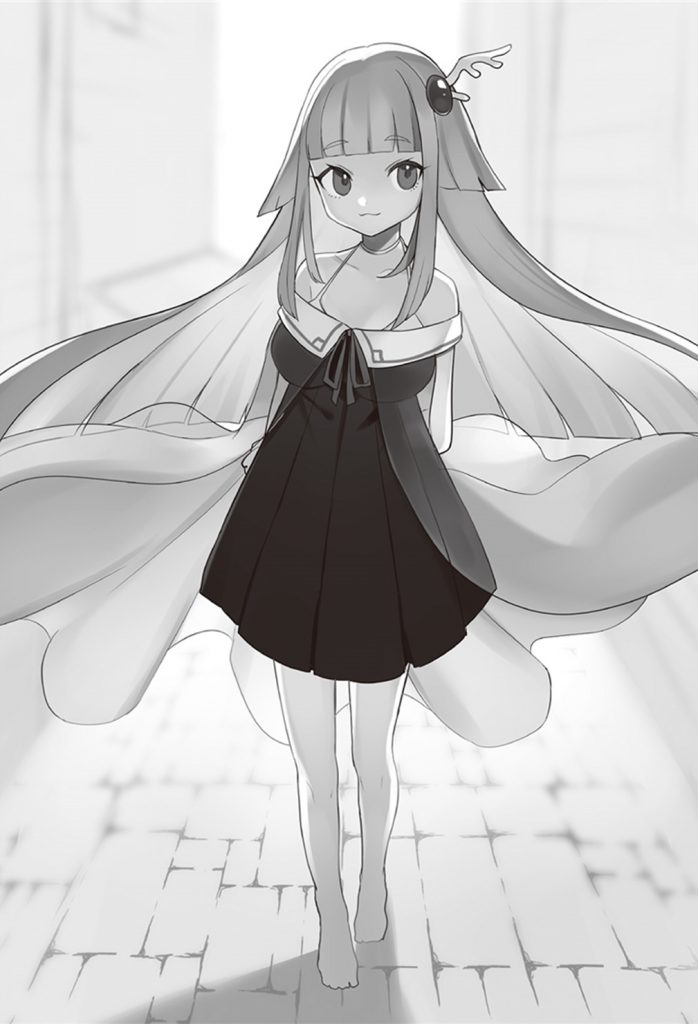 Reito, barely managing to keep himself from staring too much. He shook his head and asked her a question.

“More importantly, are you…?”

Before Kotomin could reply, angry shouts reached their ears.

Reito and Kotomin turned around and saw a large man with tattoos engraved on his arms. He looked at Kotomin, his face twisted into an angry grimace, and drew the short sword at his waist.

“Tch, did you really think you could run?? I’m going to sell you and live a normal life!!”

Reito immediately jumped in front of the girl, to protect her, and the tattooed man shouted at him.

Several men approached from the other end of the alley, following the tattooed man’s orders.

“You’re not getting away anymore!!”

Reito lifted Kotomin in his arms, then jumped on the roof of a nearby building, with Ullr in tow.

The men hurriedly gave chase, but Reito, quickly leaping from roof to roof, was already far away.

Some of the people in the streets below noticed them and yelled.

After moving far enough from the alley, Reito stopped.

“Phew…we should be safe here.”

So Reito whispered to himself, but Kotomin looked behind them and spoke.

“…unfortunately, that doesn’t seem to be the case…”

A man’s voice echoed in the surroundings.

Reito turned around and found a man with tiger ears and tail, jumping from roof to roof towards them.

The band of thieves apparently had a Beastman in their ranks: thanks to his physical abilities, vastly superior to average humans, he managed to catch up with Reito.

The Beastman almost reached the roof they were standing on, but Reito waited for the right timing and calmly cast a magic spell.

Just before the Beastman could land on the roof, Reito blew a powerful gust of wind from his palm. Unable to defend himself mid-jump, the Beastman lost his balance and fell towards the ground.

The townspeople gathered around the man fallen from the sky.

The commotion was getting louder and louder. Reito looked at the situation for a moment, then moved away, still carrying Kotomin.

“Let’s go while we can. I never expected someone to chase me on the roof…”

Reito continued leaping from roof to roof, moving to a taller building. A normal Leap didn’t bring him high enough, however, so he activated a magic spell.

Reito created an ice platform to use as a foothold and activated Leap again. It was the same method he used to escape the residence.

“We should be okay this time…get down.”

Reito let Kotomin down, who puffed her cheeks in a playful pout.

She seemed to enjoy that kind of transportation, but Reito was nearing his limits: jumping from roof to roof while carrying someone was pretty taxing.

Reito peeked at the river under the bridge and saw a great quantity of fish swimming around. The river seemed to be fairly deep.

“What a nice river…perfect for fishing, I bet.”

“What’s wrong, Ullr? Did you remember the first time we swam in a river?”

Ullr looked like he had something to say in response. Next to them, Kotomin was looking at the river — and drooling.

Kotomin stood on the edge of the bridge, leaned over, and dove down just like that. She entered the water with beautiful form, just like a professional swimmer, and proceeded underwater without a sound.

She could move at incredible speed underwater: soon enough, she jumped back out, in spectacular dolphin-like fashion.

“That’s my thanks for today, please take them.”

As soon as he heard Kotomin’s words, Ullr pounced on one of the fish and started munching. Reito, still a bit confused, picked up the other one. Kotomin nodded, satisfied, then jumped out of the water and back on the bridge.

A water spray doused both Reito and Ullr. In front of the speechless duo, Kotomin opened her arms wide, then embraced them both.

“You really saved me back there. Mmh~”

Kotomin kissed Reito on the cheek, then did the same to Ullr.

It was all so sudden that Reito couldn’t react.

With a content smile on her face, the young girl jumped back into the river.

Reito started looking for her immediately, but she was nowhere to be seen. Even Observing Eye could not locate her.

His hands closed tighter on the fish she left…