Reito left the Adventurers’ Guild and got on his carriage. He could not leave the carriage at the inn, so he decided to leave the city for the time being. His destination was the first human settlement he visited after leaving the Abyssal Forest – the village of Faas.

The village had been attacked by armed Goblins, but most of the buildings were still intact: there were lodgings available too. No one would be inconvenienced even if Reito left his horse carriage here.

“You can take a nap, buddy. I don’t have anything for you to do.”

Reito did some light stretching, then opened his status window to check the magic he had learned until now.

Reito could use the Support Magician job’s “Support Magic” and “Basic Grade Magic”, which anyone could use. He could not use the powerful “Blast Magic”, commonly available to Magician job holders.

It was also impossible to learn Blast Magic by using SP.

“I don’t think it’s worth it to use SP to learn new Basic Grade spells, though…”

Reito decided to review the magic spells he knew and tried combining them in the so-called Compound Magic Spells.

“Fire and Wind magic have good affinity, right? I could make Fire Blade and Flame Lance by combining them. If I used Magic Power Boost too, I should be able to create something stronger…might as well try.” 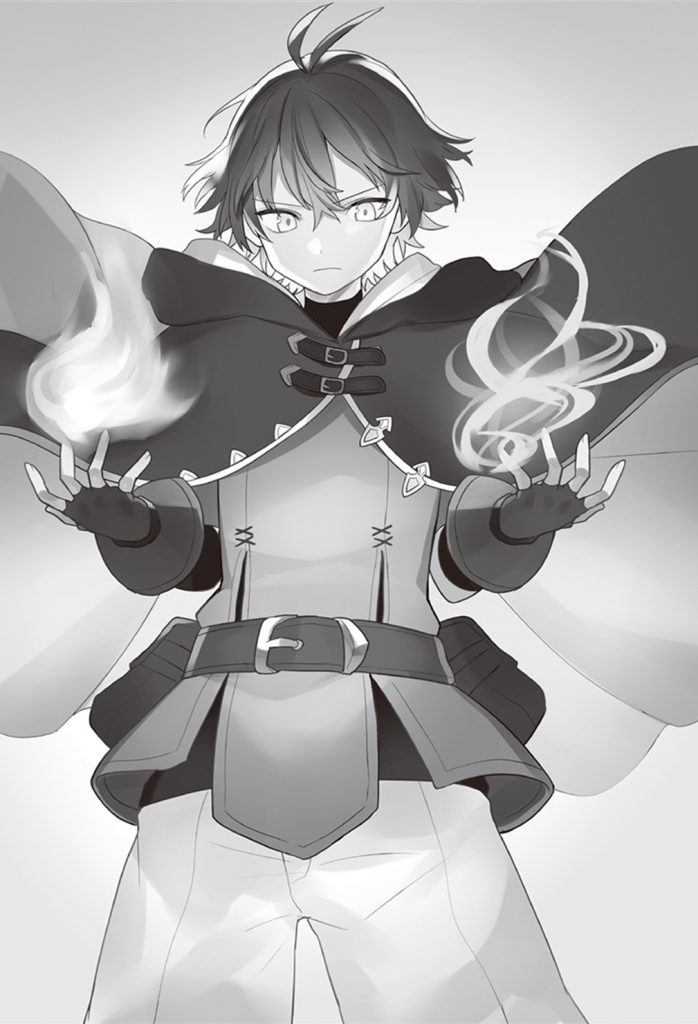 In battle Reito often used Iceclad Sword and Ice Blade Bullet, both variations of Ice Block, but in terms of offensive magic, the fire element was more powerful.

Ice Block could be used to cut down the opponent, but fire magic could cause more dramatic effects, such as explosions.

Thanks to Magic Power Boost, the offensive power of the spell increased: the flame rising from his palm was larger than normal.

A large, crescent-shaped blade formed on Reito’s palm, then crashed against the house in front of him.

The deserted house was engulfed in flames after the impact and turned to cinders in seconds.

Reito’s Flame Bullet could not be controlled precisely, so it caused indiscriminate destruction to the whole target area, but Flame Blade could be used to hit a single target with high firepower.

“Pretty good…and easier to use than Flame Bullet too…”

The next test involved Ice Block and Earth Block.

Reito created an Ice Block longsword on his right palm, then made it surge with crimson magic power.

Gravity Blade was used to wield weighty swords like Reito’s Cleansing Blade more easily: by using it on the light Iceclad Sword, he hoped to be able to increase the speed of his attacks.

Reito’s Iceclad Sword, however, could not withstand the gravity shift and shattered to pieces.

Iceclad Sword was not hard enough to endure the gravity created by Reito’s palm. He realized that only a sword with high resistance to magic could endure Gravity Blade’s effects.

Reito thought about what to try next and came up with the idea of boosting the magic spell itself.

Magicians usually used the Magic Stones embedded on their wands to boost the effects of magic spells. Reito wondered if he could do the same.

He called Airis to know more about it.

『Of course I do. It gets really hot in summer, I can’t stand it if I don’t take showers regularly.』

『Yes, yes…using Magic Stones to reinforce your magic, was it? In that case, I would recommend using the magic tool called Magic Ring. You can wear it on your arm to boost your magic, without having to use a staff or wand.』

『Oh, there’s just the right place to get one, without having to go back to the city. I happen to know where you can find a Magic Ring no one is using currently.』

He knew that a magic-boosting accessory was going to be useful, however, so he decided to take her suggestion.

Reito left the carriage in the Faas village and rode away on Ullr.

Their destination was a place filled with memories, in their nostalgic Abyssal Forest.

“So…what did we come here for?”

『It can’t be helped, you know. You couldn’t have retrieved it when you lived in the forest, so I didn’t say anything at the time.』

The Magic Ring was apparently somewhere in the forest. Reito proceeded with confidence: he remembered the lay of the land well.

With a sigh, Reito talked to himself.

“Why did the Magic Ring have to be with one of the dead people in our cave, of all places…I have the feeling that I’m always taking stuff from corpses recently…”

Ullr replied to Reito’s complaints with a sharp bark.

“I see…they took care of you before, so of course you’d want a memento…”

Ullr had been raised by a female Elf before meeting Reito: he had become able to understand human languages during that time.

Ullr’s parents were killed when he was very young: he survived by himself for a while, but was then picked up by an Elf.

Reito also used the cave she lived in as his dwelling: she was already dead when he arrived, however.

According to Airis, she had been killed by a vicious creature.

The body was nowhere to be found, but the Magic Ring was apparently still there: in the lair of the creature that killed the female Elf.

『A Minotauros. This type of monster does not dwell in forests normally…but this one started living in the forest, due to certain reasons, and now acts as the forest’s boss. By the way, this Minotauros is also responsible for the death of Ullr’s parents.』

『That female Elf challenged the Minotauros by herself, to avenge their death, but was not strong enough.』

The Minotauros they were looking for turned out to have quite the connection with Ullr.

They were now heading towards the southern side of the forest: an area Airis warned them to stay away from, when they still lived in it.

Reito and Ullr carefully proceeded in that unknown area.

After a while, they arrived before a river flowing through the forest.

According to Airis, their destination was just beyond the small river. Reito and Ullr used Leap to cross it, then proceeded upstream.

Reito was carefully observing the surroundings as they went and felt something was off.

“Weird…there aren’t any monsters around here…”

The Abyssal Forest was a veritable den of monsters.

Bear-type monsters, like the Blood Bears, often went to the rivers for fishing. For some reason, however, Reito and Ullr had not encountered a single monster yet.

To be able to proceed while preserving their energies was a good thing, naturally, but the unusual lack of monsters was a cause of concern.

Reito clenched the hilt of the broadsword on his back.

“Why isn’t there even one…? Did your nose pick up anything?”

Ullr shook his head. Not even his nose could pick up any smell of monsters: the surroundings had to be really deserted.

Reito eventually decided to take the question to Airis.

『Again with the lisp? In a serious scene like this? How does it happen, when you’re not even actually talking…? Could it be that you have awakened the “Clumsy Ditz” personality trait…?』

『Isn’t it nice, there aren’t any monsters in that area…it’s the boss’ territory, after all.』

Monsters, as well as normal animals, closely guarded their territory: they would attack any intruders without mercy.

Reito and Ullr had already stepped in the Minotauros’ territory.

『There aren’t any Goblins or Kobolds, but Orcs, Blood Bears and the rare Ogre. But even they stay away from this territory, so…』

Reito could not perceive any monster presence because they all stayed out of the Minotauros’ territory, fearing it. The forest boss was powerful enough to intimidate even Ogres.

With a pinch of apprehension for the coming battle against the Minotauros, Reito prayed he wouldn’t end up dead before the fight with Gain.