While Reito was training in the Abyssal Forest, the search team formed by the Adventurers’ Guild and the royal army investigated the Ymir coal mine.

The team was formed by two A rank adventurers hand-picked by Bal and ten royal army soldiers assigned to the Adventure City Lunot: their task was to recover the bodies of the armed Goblins.

When they arrived at the excavation site, however, there were no Goblins to be found. All they could find were traces of fighting.

The pro empire faction had likely already erased their tracks: the search team then decided to investigate the mines.

Upon entering the mine, the whole search team died at the entrance.

The cause of death was the same for all of them: lethal wounds from a bladed weapon. The scene was described with a single word, “carnage”.

The bodies of the search team members presented countless wounds, their heads cut off and lined up on the ground, surrounded by pools of blood. The message was clear.

The search team had died at the hands of a single one-eyed swordsman.

He looked down at his katana which was drenched in blood while he sat on one of the corpses of a search team member.

His gaze moved from the eerily glowing blade to the corpses he had just cut down.

The swordsman’s thoughts were absorbed in contemplating the mutilated bodies, a look of ecstasy on his face.

He licked the blood dripping from the blade, as if reluctant to waste it.

Prominent canines poked out of his mouth as he smiled. His eyes were of an unusual red color.

The boyish-looking man was clearly excited at the sight of the dead bodies.

He was the man Bal swore revenge on, her fated enemy for the last twenty years. 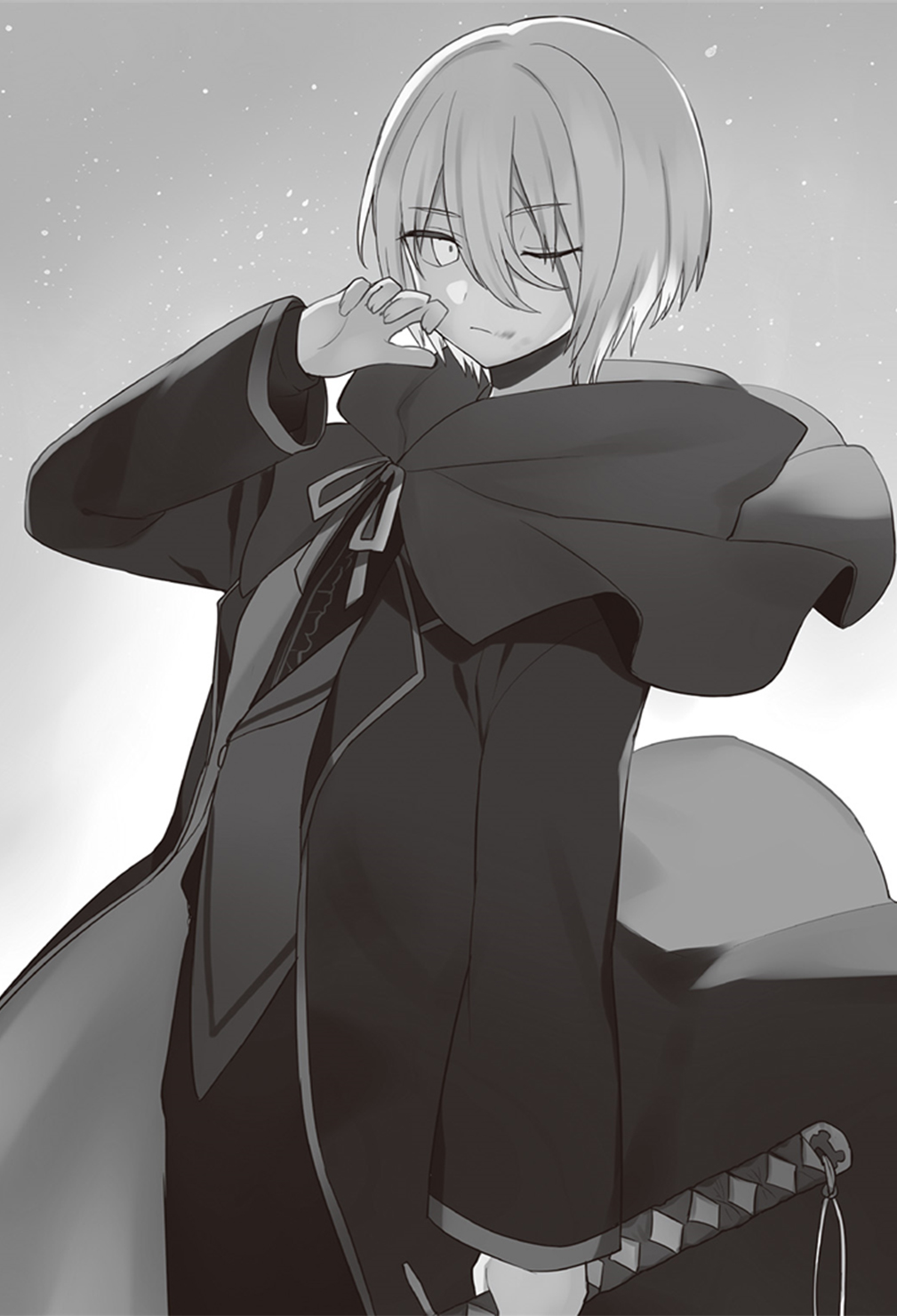 He was not a human being, but a Vampire — a Demon.

Vampires had the ability to turn other species into Vampires: Gain too used to be a normal human, but was turned into a Vampire dozens of years before.

The greatest trait of Vampires was their ability to stop aging, as long as they drank blood. In fact, Gain’s appearance had not changed since he was 15 years old. Incidentally, Vampires favored Human blood the most: being undead creatures, they could not produce blood by themselves, so they made others’ blood into their own.

Gain looked at the dead female body under him and shed sincere tears.

“You humans are not our prey…we should live side by side, in harmony. How unfortunate, that you had to refuse to become my slave…”

When Gain encountered the search team, he asked them to surrender. He was refused, however, so he had no choice but to kill them.

“How sad…! Humans and us, we should be able to understand each other, and yet…! Don’t you agree?”

Gain turned around and asked the question to the other officer of the pro empire faction he had come to the Ymir mine with. His gaze, however, only found a large boulder.

The person Gain had turned to was hiding behind the boulder: the other officer was an Assassin job holder who rarely showed themselves.

“You cannot comprehend my words yet? Humans are not cattle for us Vampires, we should be able to coexist…thus I had a duty to respect their will.”

“I have no interest in your way of thinking…I will go make my report now. What will you do?”

“Hmm, yes…it appears my presence was noticed by someone in a city close to here, so I am going to welcome them into my family.”

“Your slaves, you mean?”

He sheathed his blood-red sword, then stepped towards the boulder and drew it again, emanating an incredible amount of killing intent.

A red slash cleaved the boulder in two. The katana had sliced the boulder like a knife through butter, but the presence behind it was already gone.

The boulder fell apart and Gain frowned at the empty space behind it. He sheathed his sword once again, then touched the scar on his left eye.

The vampire’s scar was caused by a former S rank adventurer, the current guildmaster of the Black Tigers guild, Bal. Gain grinned as his fingers traced the old wound.

As a Vampire, he could use the blood he sucked to boost his strength or heal his wounds. He chose to leave the scar on his left eye, however.

He desired to meet Bal, the woman who hated him and was now desperately searching for him.

The scar stood as a symbol of his desire.

Gain had killed her parents and, two years before, the person she loved the most too had fallen at his hand.

“Come, come soon, my beloved…there is nothing more delectable than the blood of those who seek revenge…”

Gain longed for the meeting with his “favorite food”, which he crafted for almost twenty years.