After a few hours into the training, Reito was completely prepared. He asked Airis Aria’s whereabouts and headed to the place she was hiding out.

Reito had come to some ruins that looked like an old church. There were no signs of other people or buildings.

Reito, carrying the Extermination Blade on his back, opened the door with his shoulder.

The inside was brighter than Reito expected. There was a large stained glass window on the ceiling, and although it was already nighttime, light shone in.

A woman with white hair and wings on her back was depicted in the stained glass. Curiously enough, the part with her face on it was destroyed.

He looked at the woman and felt a strange sense of déjà vu.

“Little boy!” a voice came from somewhere as he was just about to grasp the truth of the déjà vu feeling.

He looked to the side to find Aria standing there, clad in all black. Reito thought he would lose it if he saw her face again, but he was taking it surprisingly cool.

Unlike the last time Aria attacked him, she had two kodachi (short swords) on her waist. Her pupils were empty. Reito had seen that facial expression before. When he had fled the mansion, she had tried to assassinate him with that very same expression.

Reito surmised that she was trying to kill him for real just like that time.

“Don’t call me that. I’m not your maid anymore.”

“You are my family. I’ve never thought of you as a maid.”

Aria’s pupils fluttered at Reito’s words, but she shook her head to the side and drew her kodachi, ready to fight. Reito clutched the Extermination Blade on his back. 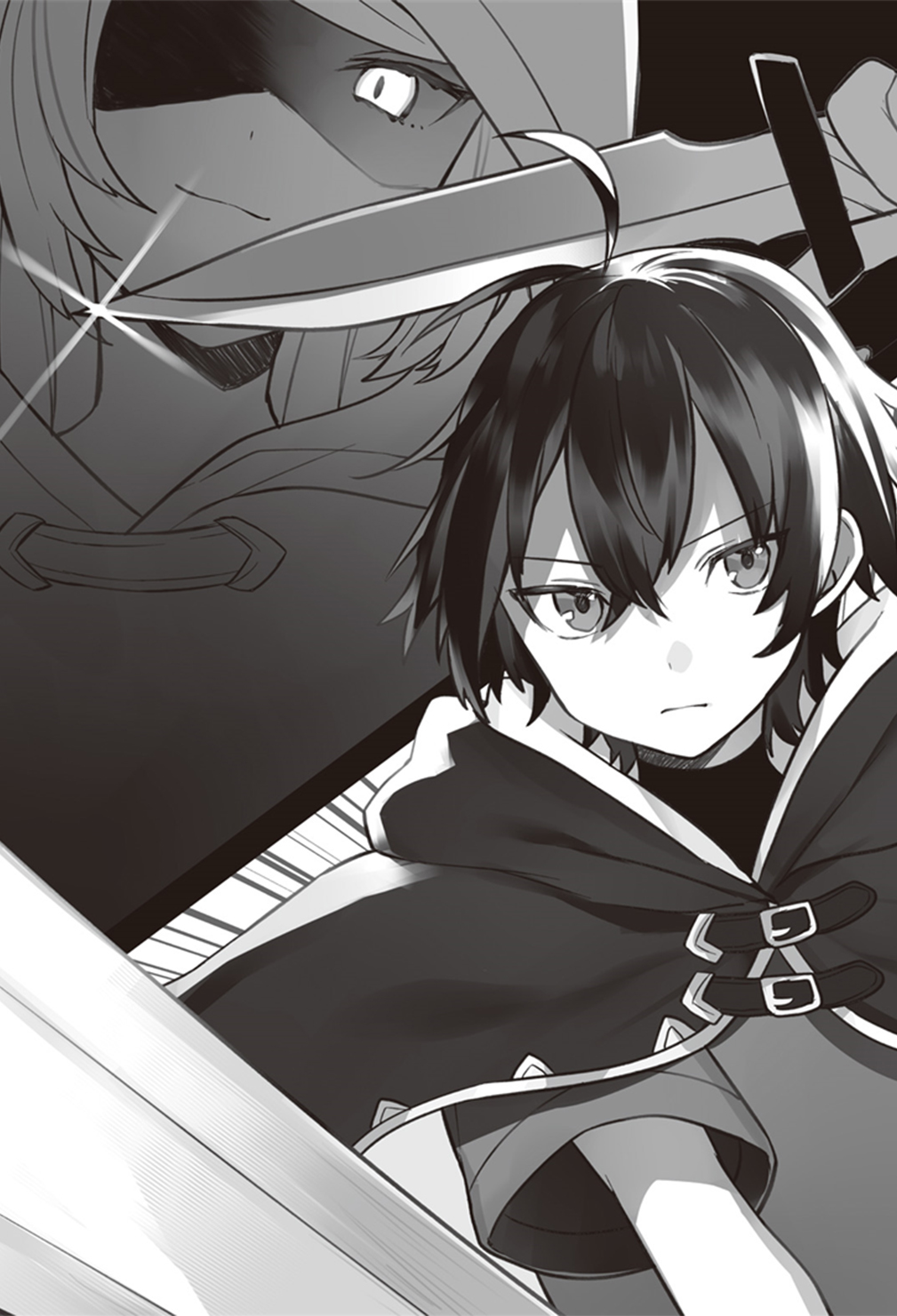 The two of them moved at the same time and used their battle skills.

The metallic sound of their blades striking rang throughout the church. The blades repelled each other. Overwhelmed by the power of the other, Reito and Aria had taken a step back before activating “Leap” and launching toward each other.

Reito swung sideways, but Aria parried Reito’s Extermination Blade with her Kodachi in mid-air. She spun her body and aimed to cut Reito’s head off. Reito ducked his head and avoided the attack before swinging his longsword again.

“Wind of the Deceased.”

The moment the longsword approached Aria, a blast of wind burst through the room even though they were indoors.

Aria rode the wind, and Reito realized she was using spirit magic that only elves could use.

One time, when Reito was a child, he had fallen off the roof of his mansion, and Aria had used the same magic to save him.

Reito aimed for her in mid-air and released some magic of his own.

Aria didn’t flinch. She funneled her wind magic through her kodachi, slicing through the magic attack.

Pyro magic was advantageous to use against wind magic, so it was weird that she was able to cut through it.

“Only spirit magic can beat spirit magic. Regardless of how well one can use their magic, ordinary human magic doesn’t work on elves.”

“Oh, I didn’t know that. So, that’s why elves are known as the most superior race.”

She funneled more wind through her sword and got it ready. Reito judged that he had no chance to win with ordinary magic and used his “Gravity Blade.”

Seeing Reito approach from the front, Aria spun her body with full force and swung her kodachi.

The power of wind and the power of gravity collided. Reito was stronger.

One of her swords went flying as she was blown back.

Reito also sustained some damage. When their blades collided, the wind power sliced every part of his body.

Reito was on his knees, “If I’m using gravity, it looks like wind attacks won’t work.”

“Air-splitter Slice!!” Aria grasped her kodachi and swung down.

A large crescent-shaped blade of wind was released from her kodachi.

Reito realized he wouldn’t be able to dodge the attack and used a battle skill he learned from Bal — he turned his extermination blade into mithril.

Mithril is a metal with magical resistance properties. He was able to cleanly cut the wind blade generated from the spirit magic head-on.

The collision wave rushed through the room and violently shook the stained glass ceiling, cracking it in the process.

Reito pointed the sword and rushed at her but Aria stayed calm.

“I knew you would do that, little boy.”

The next moment, Aria disappeared from his sight.

Expecting this situation, Reito had been drilling his “Mind’s Eye.”

He felt the faintest of presences coming from the right. Normally, she would have been able to completely kill her presence, but she was tired from all the fighting, and her skills were lacking a certain luster.

Reito redirected his swing to the right and stuck it out.

Aria instantaneously threw her kodachi at Reito, but he didn’t try to avoid the attack.

Reito used his storage magic, generating a black whirlpool. He had sealed the kodachi away in another dimension.

Aria, coming apart at the seams, tried one last attack.

A voiceless scream reverberated through the church and blood splatter came from her body.

She looked at the Extermination Blade that was piercing her body and spit out blood.

Reito was panting in exhaustion.

“Wonderful work, little boy,” Aria smiled even though she was on the verge of death.

Reito remembered the days they had spent together at the mansion and began to shed tears.

Aria’s face grew limper before the slime attached to her body peeled off.

At long last, Reito was able to see her real face. She put her hand out for Reito.

“Thank you. I can finally…” she wasn’t able to say her last words as her strength left her body.

Reito tried to grab her hand, but he wasn’t able to before her body had fallen to the ground.

Reito let go of his Extermination Blade and ran to Aria. He held her body like a child and cried. He had prepared for this before he came here, but this was still someone he considered important. He couldn’t stop crying over the fact he had to kill her.

He picked up her body and saw something slip out of her chest.

Reito picked it up and saw the birthday present he had gotten from Aria as a child — a small bottle of recovery medicine. There was a crack in the bottle from all the fighting.

When Reito had run away from the mansion, he left behind the small bottle and his mother’s pendant.

Reito squeezed the shards of the small bottle, disregarding the blood pouring out of his fingers. Then he saw Aria’s face lying with a peaceful expression.

After all, Reito couldn’t even know Aria’s real name. Reito continued to shed tears, but Airis’s voice suddenly echoed in his mind.

『In that place, there are a lot of pyromagic stones hidden in large quantities. The church is about to burst into flames!!』

『We don’t have time for that. Aria was the one who decided to put the stones there in the first place. She planned to burn your body after she murdered you.』

『We’ve gotta get out of here! If you were to die here, she would be sad!!』

『Ngh!!』Reito looked at Aria’s corpse before leaving it behind and fleeing from the church.

The moment he got out, the church burst into flames and slowly burned away.

At present, he was digging a hole in the burnt-down church. He found the carbonized remains of Aria and buried them. He stuck her kodachi in the ground as a makeshift grave and returned home. He took the shard of the recovery medicine bottle as a memento, putting it in a leather bag.

When he was returning home, he noticed he was being trailed.

He turned around to see the runaway elf Raikofu in dirty clothes carrying a bow and arrow. He had a nosebleed and was dragging his left leg. Why was he here? Reito didn’t even feel like asking.

“Because of you, I lost everything! It’s all your fault!!”

Raikofu drew his bow, but Reito didn’t even try to run away.

Raikofu widened his eyes at Reito’s apparent lack of concern.

“What’s wrong with you? Get out your sword!! If you’re going to die, die like a warrior!!”

Raikofu was skeptical that this man lacking in vigor standing in front of him was the man that managed to defeat him.

But then he got angry that this kind of loser had ruined his life and fired his arrow.

“What are you looking at?”

A voice came from behind Raikofu.

He turned around to find Reito standing there.

Raikofu let out a pathetic scream and fell over. He was trying to run away, overwhelmed by fear.

“Where are you going?”

Reito was in front of him now.

“What are you saying, fool!”

Reito wasn’t sure why Raikofu was so afraid. He was just using “Leap” to jump from place to place. Apparently, Raikofu wasn’t able to see his movement.

Reito noticed something, “So that’s what’s going on?”

<Shrink Ground – enables teleportation in a 10m radius around user>

“Shrink Ground” was a skill the Vampire Gain had used as well. During his battle with Aria, he had acquired the skill before he knew it.

Reito gained a new title. He read the description and laughed at himself.

This title was perfect for him now. He thought about that and reached for his Extermination Blade.

Reito swung his Extermination Blade down with great force. Raikofu covered his head.

Seeing that, Reito stopped his sword just before it stuck. He punched Raikofu instead.

Reito squatted down and made eye contact with Raikofu who was dazed.

Glaring at Raikofu, who had pissed himself, Reito left the scene.

Raikofu had sunk to the ground and was holding on to his bow tightly. He weakly let go of it—