While Reito and crew were fighting with the undead at the south gate, there were countless other undead at other gates planning their assaults.

The Black Tiger guildmaster Bal was assigned to defend the east wall, and she was fighting with adventurers from other guilds across the wall on a grass plain against the undead.

“Human” undead were battling at the east gate. Most likely, starting with the village where the Rotten Dragon lived, they had turned the residents of a few villages and towns into the undead.

Although they were originally humans, they were now monsters. Bal mercilessly swung her broadsword through them.

The adventurers who had hesitated in their attacks were bit at, but Bal came in to slice off the monsters’ heads.

The undeads with their heads sliced off fell to the ground, and the adventurers screamed as they backed away from the bodies.

Bal yelled at them.

“Don’t shrink back just because your opponent used to be a human. If you are careless, you’ll be killed! Remember that!!”

Even more undead attacked the adventurers.

The human undead were significantly weaker than other monsters, and their bodies were rotten and therefore slower than regular humans. Battle conditions were looking good at the east gate.

At the north gate, the Fang Dragon guildmaster Gigan stood alone in front of the burst open gate.

What seemed to be an endless number of skeletons were trying to cross the bridge over the moat.

Skeletons are often called mere shadows of human undead. Gigan was waiting for them at the gate as he called to the other adventurers.

“Don’t be afraid!! Fight these bastards trying to scale the wall!!”

“Gigan-sama!! The skeletons are approaching!!”

The majestic gate was open, and countless skeletons were advancing toward it.

The soldiers’ bodies were shaking, but Gigan looked bored with his battle ax in hand.

“Humph… You really think you can take down the city with only this many skeletons?”

Gigan waited for the skeletons who busily chattered their jaws as they approached the gate.

He was planning to push all the skeletons back by himself. If the other humans knew of his current plan, they might think he was being foolish and oppose it.

But Gigan had absolute confidence in his strength and stood firm with a stony expression on his face. If the opponents were humans, they might have been overwhelmed by Gigan’s aura and fled, but they were skeletons who knew no fear, so they rushed to attack him without mercy.

Gigan yelled as the noise of bones being smashed rang out.

The greatest number of adventurers were gathered at the west gate.

Maria was charged with defending the south wall and was standing on top of it. She was staring at the massive undead beasts approaching the city with a look of boredom.

The “Mamou” were approaching the gate. They are monsters similar to mammoths — these particular Mamou were undead. There were four of them in total. The members of the Hailstorm Guild were split up into groups and were attacking the Mamou.

One of the adventurers reported to Maria.

“Maria-sama!! Team A fighting with the Mamou is seeing increasing casualties!!”

“Move out Reserve Team E as reinforcement. How are the other teams?”

“At present, Team C appears to be in good shape…”

“Right, in that case, you have nothing to do.”

Maria had divided the adventurers into six teams from A to F. A to D were currently dealing with the situation. To prevent any damage to the wall, she had them out in the field fighting.

“This is not good!! Maria-sama, the Pao has cut through Team D and is coming this way!!”

“The Pao… that’s a subtype of Mamou.”

She looked at Team D to see an enormous elephant-like monster called the Pao swinging through Team D and coming for the gate.

She looked annoyed, readied the blue ring on her pointer finger, aimed it at the Pao, and fired away.

A cold blast of wind was released from Maria’s ring the next moment.

The other adventurers were surprised, but Maria just sighed, bored.

“Tsk tsk… Don’t make me use magic on this shrimp of a villain.”

“I will leave the rest to you. Call me if something happens.”

Maria, who had frozen the enormous monster in an instant, shook her head as she walked away from the wall.

She had other business to attend to.

While the four walls of Adventure City were under siege from the massive hordes of the undead, the Rotten dragon was in a village 10 kilometers away.

In a graveyard in the corner of that village was the most potent necromancer in the world, Kirau. She was talking to the row of select necromancers standing in front of her.

“You really put up a fight. Are you exhausted?”

The necromancers were all shedding tears of blood and had withered away.

They were being manipulated by Kirau like puppets. They were using an extraordinary amount of magical energy to change an enormous number of corpses into the undead. They are attacking Adventure City at present.

But, that was a precarious endeavor. The strain of maintaining an army of the dead was putting a lot of toll on the necromancer’s bodies, and as the undead perished, it affected the necromancers as well.

Ten of the necromancers in front of Kirau had passed away. The undead they had been operating had all been defeated, and they fainted as a result before dying.

“Gngh…!!” another necromancer passed away.

“That’s the eleventh one… perhaps I should move out soon.

A growl could be heard from behind Kirau.

“Relax. It will soon be your turn,” she smiled and turned around to the owner of the growl.

There was the massive head of the Rotten Dragon, gazing at her with empty eyes.

The Rotten Dragon, who had done nothing but eat for the past few days, had grown to a size of over 40-meters. She was planning to finish things up in the evolutionary process of the Rotten Dragon.

She snapped her finger, and the last three necromancers standing raised their voices in agony. She had ordered them all to die.

She then commanded the rotten dragon to “eat up” with no sympathy whatsoever.

The Rotten Dragon slowly raised its head and gulped down the four corpses when she pointed at them.

After the four corpses were eaten, the rotten dragon’s eyes had a mysterious glow. Its body had changed. Black magic was oozing out of its entire body, and it had covered up its rotting skin.

“Hehe. Don’t get so excited. There’s no need to wait any longer. Let’s go.”

She looked at the rotten dragon, which had turned completely black, and determined it would be dangerous to touch it in this state. She used the armband on her right arm. It was one of the “sacred treasures” left behind by the first generation of heroes. 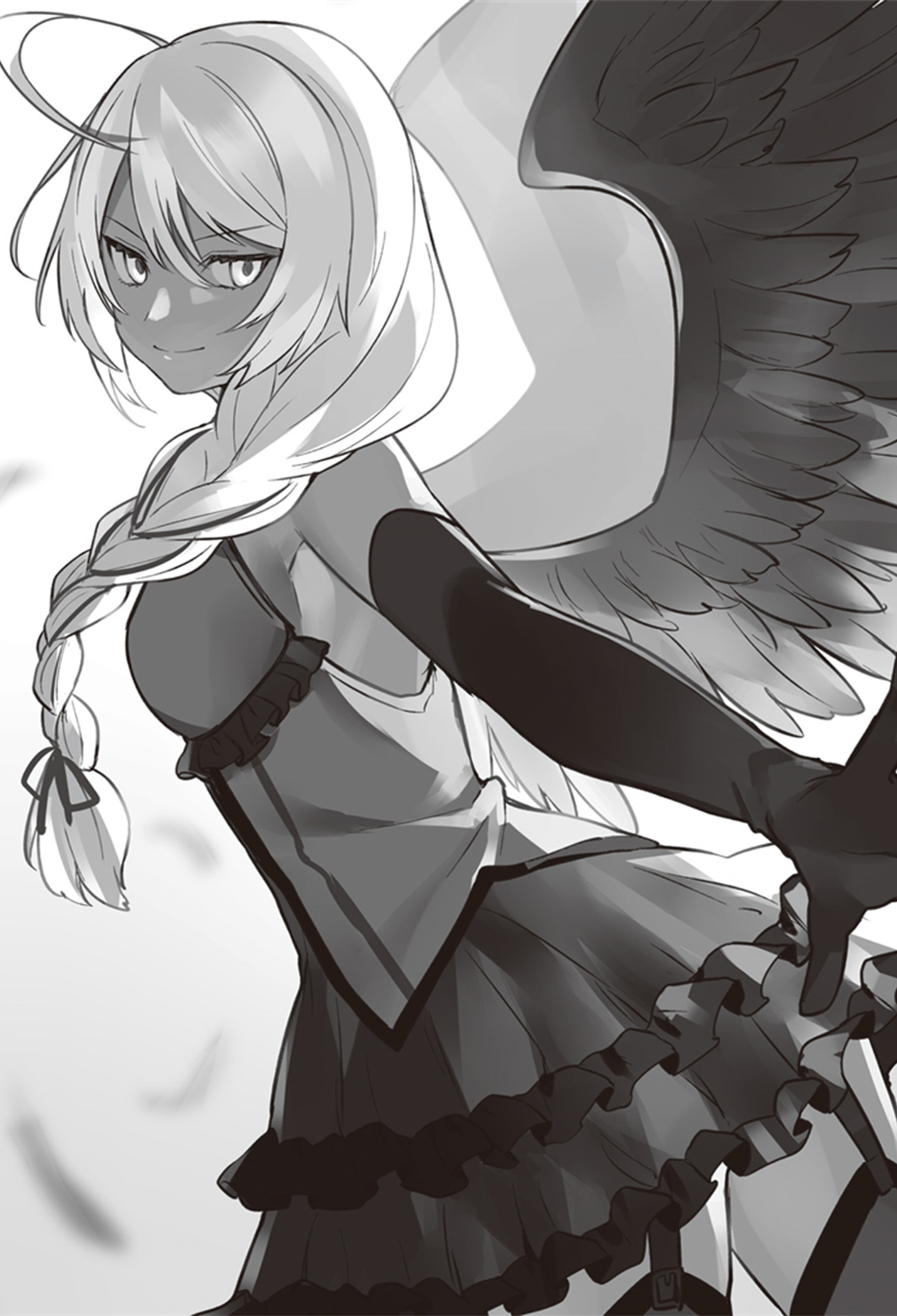 Kirau spread her wings and flew away.

The Rotten Dragon spread its wings and lifted its enormous body off the ground, with Kirau following behind.

They were heading for Adventure City. They planned to trample it with overwhelming force. This was aligning with the will of her commissioner, the Empire, but she didn’t mind.

“I can finally kill that eyesore of a woman. If I destroy the city, should I go for the royal capital next?”

Kirau thought about the current ruler of the Empire as she muttered to herself.

The Royal Capital had a troublesome commander-in-chief who had more strength than Kirau.

But with the Rotten Dragon, she was confident that she could overwhelm and defeat that enemy. She was determined to attack the royal capital next.