Everyone took their stances again. The Minotaurus glared at Dain, who was restraining it.

“Why are you looking at me!? Gonzo and Reito are the ones who hit you!?”

“Yeah, but…” Dain was hiding behind Gonzo.

His shadow magic was surprisingly effective against this demon they were battling against. He wouldn’t be able to restrain an opponent that was larger than him for very much time, but the ability to stop their movements mid-battle was still a big advantage. Also, as far as physical constitution goes, the Minotaurus was smaller than both trolls and Blood Bears, so Dain was able to use the skill tactfully.

“Dain, when I give the signal, stop him again. I’m gonna take him down this time.”

“Ullr, help me out. Let’s avenge your parents!”

Reito grasped his Extermination Blade and stood next to Ullr. Reito and crew were on guard. The Minotaurus clutched its ax again.

If Dain could succeed in restraining it with Shadow Magic, they should be able to pin it down with the next blow. Reito got ready for his next attack putting Sword Demon into effect.

“I’m still not used to this ability,” Reito muttered.

The Minotaurus was puzzled at Reito who closed his eyes in the midst of the battle. But then it noticed the aura emanating from Reito’s body. The young boy, not even in his late teens, was emanating an aura as if it were life-or-death. The Minotaurus felt a sense of danger and prepared to attack.

The other humans were screaming, but he flashed his red pupils at the ax approaching fast and grasped his Extermination Blade.

Reito swung his blade at a ferocious speed.

Godspeed would be an appropriate word for the velocity at which the blade struck the Minotaurus’s blade dead on.

A sharp metallic noise accompanied the Minotaurus getting blasted away.

“Awe-, Awesome!! I feel like you can defeat it on your own.”

Reito kept his sword in hand as he recovered. He looked at the Minotaurus laying on the ground. The Minotaurus looked surprised that it had been knocked over by a puny human and got back up immediately for its next attack.

Reito calmly parried the Minotaurus’s haphazard ax swings. He continued dodging his opponent’s attacks one after the other. The Minotaurus was half monster and therefore had less skill than Reito. He prepared a counterattack using the sword attack learned from his master in Adventure City, “Strike Blade.” 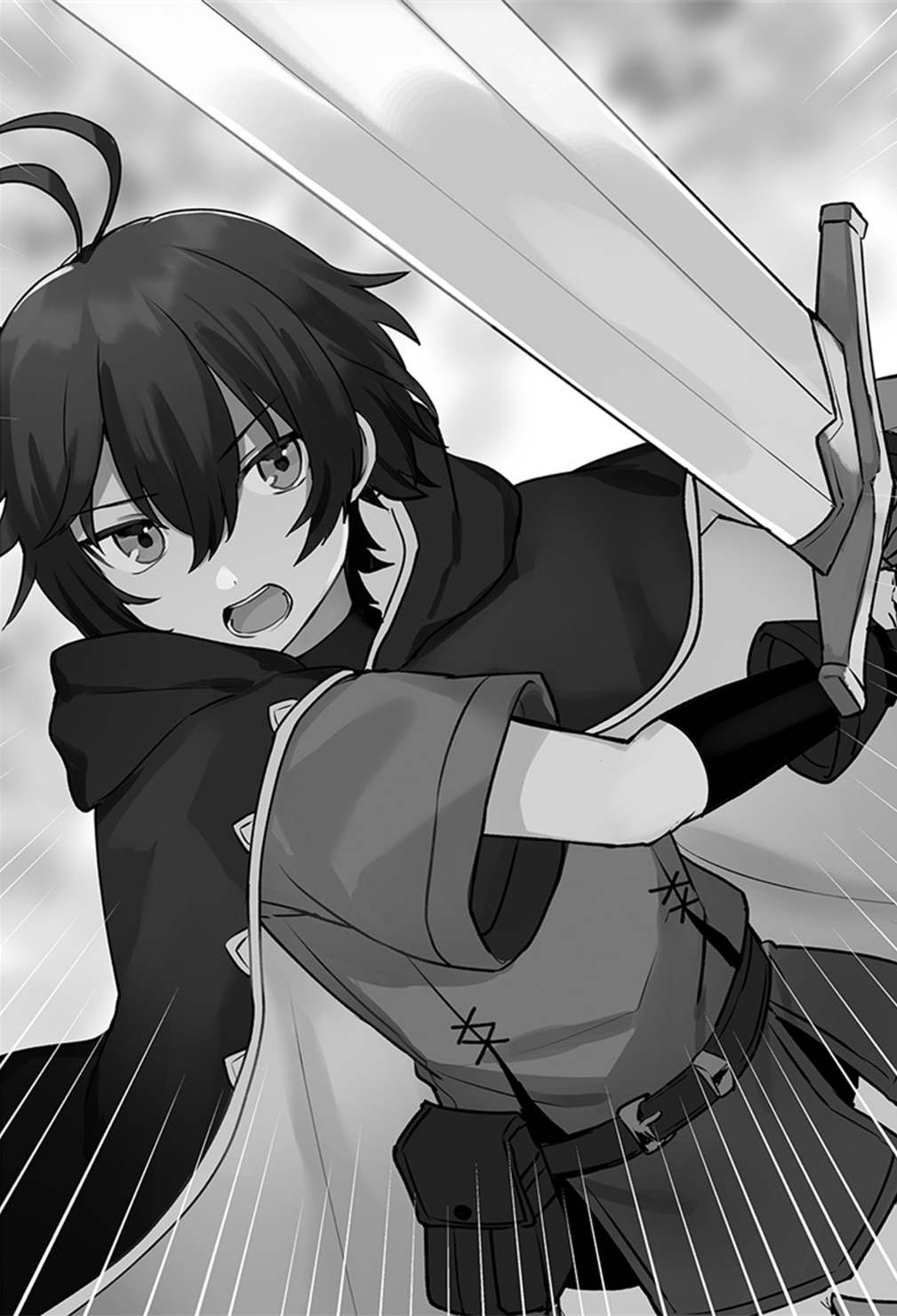 Reito spun his body and repeatedly swiped his sword sideways. The Minotaurus blocked it with its ax, but it was quickly losing stamina.

Not losing out on the chance, Ullr jumped into action.

“Mooo!?” Ullr launched himself into the Minotaurus’s abdomen and knocked it over. It bit into its neck with its fangs and ripped it apart.

The moment Ullr’s fangs, which had been sharpened like a blade, dug into the Minotaurus, Ullr got confused. The neck had been hardened an absurd amount, and his fangs couldn’t pierce the surface.

Ullr continued to try to pierce the skin.

The Minotaurus tried to peel him off, but Dain used his Shadow Magic before he could do so.

Ullr tried to chew into its neck, but the Minotaurus’s ax changed shape.

The ax handle suddenly changed shape and became like a halberd.

The Minotaurus swung the halberd at Ullr.

Before the halberd could strike Ullr, he managed to get away. The poor wolf didn’t manage to get a proper bite, so he returned to Reito.

The Minotaurus got up, now free to move how it wanted. It swung the halberd up.

“THIS IS NO GOOD!! Harden, Unmovable Rock!!”

Gonzo stepped in front of them and crossed both arms to use his defensive skills. They were hardening skills exclusive to giants.

Gonzo closed both arms and took the Minotaurus’s blow with his bare hands.

“Did he just stop it with his bare hands?”

A metallic noise thundered through the surroundings. It didn’t manage to sever Gonzo’s arms, but it did make a dent in them.

The Minotaurus’s arms put all its strength into its muscles to try to cut through Gonzo’s arms.

Before it managed to fully sever Gonzo’s right arms, Reito swung his Extermination Blade down on the Minotaurus. His opponent retreated and the halberd fell out of its hand. Blood spurted from Gonzo’s arms.

Kotomin put her hand on Reito – who was about to use recovery magic on Gonzo – to stop him. She approached Gonzo and put her hands into the waterfall to her side. She pooled the water in her hands and rubbed it on his scar.

“So this is mermaid recovery magic.”

Kotomin was chanting some sort of spell as she waved her water-rinsed hands over the scar.

His wound started glowing, and Gonzo’s face looked a lot better. Her recovery magic was faster and enabled him to regain some of his physical strength.

Gonzo was surprised, “This is… incredible. I’m all better. It’s like I took some sort of healing medicine or something.”

“That’s because the water is so clean out here… With normal water, I can only do basic first-aid.”

“I can use magic on water to create a ‘Recovery Liquid.’ I can do recovery magic so long as there’s water.”

According to Kotomin’s explanation, she was using a kind of spirit magic passed down between mermaids. The purer the water, the more recovery power it had.

The Minotaurus had caught its breath while Gonzo was being healed. It swung its halberd at Dain, but Reito stepped into to stop the attack. The weapon’s shape had changed, and accordingly, so did the Minotaurus’s attack style. It sent out a wave-shaped attack instead of swinging it haphazardly.

The Minotaurus jabbed the handle of the halberd into Reito’s stomach.

“That was a close one, Reito!!” Gonzo shouted.

Reito used all the muscles in his body to repel the Minotaurus’s attack.

A shower of sparks flew when his broadsword and the halberd clashed. Reito had weaker arm strength and was trying to avoid entering into a direct sword battle.

The Minotaurus used the halberd handle to stop the Extermination Blade, but it was astonished at the strength of the pipsqueak child half its size.

Reito managed to overpower the Minotaurus.

The broadsword swung from below and managed to repel the halberd. Ullr took advantage of the break in action to attack. His opponent strengthened its neck, but Ullr went for the torso instead.

Ullr bit the side of the Minotaurus’s stomach and ripped off a piece.

“Mooo…!?” a tremendous amount of blood came gushing out of the left side of the Minotaurus’s stomach.

“Is it still trying to fight?”

The Minotaurus had not lost its will to fight despite the large amount of blood loss. It clutched its halberd and approached Ullr. But, the gash left behind by Ullr was deep, and it was only a matter of time before it collapsed.

Ullr turned his back on the Minotaurus and returned to Reito’s sides. Ullr shook his head to the side as if to show his satisfaction.

“What!? You’re not going to kill it!?” Dain was surprised at Reito’s words, while Kotomin and Gonzo looked dumbfounded.

The Minotaurus mooed in rage at Reito and crew, who were trying to spare it.

The Minotaurus was furious and would rather be killed than pitied. Reito put his sword on his back and approached it. He looked at the Minotaurus on one knee.

“I won’t kill you. You didn’t try to kill us the first time we met, right?”

The Minotaurus stared into Reito’s pupils before trembling in fear. It felt like it had just made eye contact with a giant demon. The Minotaurus had battled with many a monster and human, but this young boy was the first one to scare it.

The Minotaurus slowly got up, “Moooo…”

The Minotaurus dropped the halberd in its right hand and walked away from the scene.

Reito watched the Minotaurus fade into the distance as he wondered what to do with the halberd.

Airis’s voice rang out in his head.

『That is a sacred treasure known as an “Ax” made by the first generation of heroes. The handle is made with exceptional craftsmanship. It can change its length at will, just like with your “Change Shape” skill. The depressions in the blade are embedded with magical gems that allow you to use magic with it.』

『The sacred treasures are not just weapons. The necromancer, Kirau, used a tool to sprout wings from her back as she pleased. The tool absorbed the users’ magic, letting them sprout wings and fly in the sky.』

He finished communicating with Airis and then tried picking up the Halberd, but it was heavier than he thought, and he couldn’t move it.

“Let me try,” Gonzo approached and barely managed to lift it up.

“Wow… This is really heavy. It’s quite the work of art.”

“Do you think you could use it as a weapon?”

They had no choice but to store the sacred treasure “Ax” behind the waterfall. Reito could have put it away with his storage magic, but given how heavy it was, there was a chance it would have gone over his storage capacity.

“Haahh… I can’t believe we made it out of that fight alive. Usually, you would need five or six A-rank adventurers to take down a Minotaurus.”

“It’s like I said, it’s nothing compared to a Rotten Dragon.”

“That’s true, but… you’re going to kill me one of these days, Reito.”

“Don’t talk about me like I’m the God of Plagues. I might be a god of ill fortune, though.”

『Who said you were a god of ill fortune! I’m gonna put a curse on you!!』

Reito apologized to Airis’s voice at a volume that no one else could hear.

The group was about to enter the cave where the defeated Minotaurus had been, but everyone frowned after taking a few steps inside. The inside of the cave was a wreck, and it was littered with the corpses of magical monsters. There was no doubt that this was the work of the Minotaurus from before, and it appeared he was making use of the space as his nest.

“Hah… I can’t believe he messed up my hideout. Ullr!! Why did you have to pick up on his scent.”

Ullr whimpered passively. Dain made a joke, “Yeah, it really makes you wonder why we let him go!! What was the point of that whole fight anyway?!”

Gonzo looked around the cave.

“It looks like we won’t be able to make much use of the place. It would take too much time to clean up.”

“We have no other choice. It would take too long to change locations… Wait!” Reito thought of an alternative hideout.