A man who wielded the sword to live. A man who lived by the blade.

There is no better way to describe me.

The feeling of gripping a sword was always present in my hands. Whenever I raised my hands, I felt the urge to swing a sword. The desire faintly grows within me. To such an extent, my life has been devoted to the blade.

However, in this life,  I haven’t swung a sword, not even once. The reason I wielded the sword before was that not doing so meant death. It was a life in which wielding the sword meant survival, a world where you devour or be devoured.

I barely have any memories from my childhood. Even so, in the past I….

I always laughed. No matter when or where, I laughed so much, like an idiot. I laughed, blandly, even if I didn’t mean to. It was one of the tools I learned to survive.

They told me that it was easy to tell what I thought, so I should keep laughing. And I did. Whenever a blade was in my hands, I laughed like a clown.

There was one more thing my mentor always told me.

<<People killing each other is not a sad thing. What is truly sad is that wielding a sword is a necessity.>>

As long as it’s necessary, I will wield the sword again. But if it is not necessary, there is no need for me to do so.

<<Hey, ***. Wielding the sword means to be haunted by death. Not wielding the sword is just the opposite. If we can ever reborn, a life where we don’t have to wield a sword would be nice….>>

Because I’m the disciple of a mentor who died after saying these words with a smile on their lips.

A life different than the one of the man who wielded the sword to survive, who lived by the blade. A peaceful life where wielding the sword is no longer a necessity.

If possible, I hope this lifestyle continues forever.

In a world where wielding the sword was a source of honor, I hold emotions that only my mentor would understand.

Something inside me tells me to open my eyes. At the same time, my body seems to be shaken by something…

“….yeah, I’m awake. I just woke up, so stop shaking me. I’m five seconds away from puking.”

“The last time you said that you made me leave the room because you wanted to vomit in peace, but you fell asleep again and woke up in the evening! Your words do not deserve a speck of trust!”

“Haah…listen well. Kids who sleep well grow more. I’m in the middle of my growth spurt.”

“Your Highness is already fourteen. You should behave more like a prince—”

The culprit of my awakening, the maid Ratifah, continued her jarring preaching, but I turned the other way and pulled the blanket over my head.

Yes, I do carry the title of prince, but I’m just the third prince. I’m also the son of a concubine, so I’m only fourth in line for the throne. Basically the chance of me becoming king is less than 0.1%.

I asked Ratifah once if it was really necessary for her to preach about me acting like a prince etc, and she went on a tirade for a few hours about that not being the point, so I have learned to keep quiet.

“Are you listening!? Your Highness!! If you don’t act properly—”

I’m sick of hearing stuff like “act properly”. I have been for a while.

It’s just threats anyway. I can just let them roll off my back.

My scheduled wakeup time today is 4 PM. I should have about eight more hours….good night.

My body shudders instinctively. The head maid of this royal palace…Ratifah knows that she’s my only weakness. This is what they call hitting below the belt. It’s never worked once, but I should petition father for changing my attendant.

<<I shall take care of this duty, then>>

I imagined the head maid applying for the position in Ratifah’s place and quickly discarded such thoughts. Ratifah’s the best after all. Hahaha….

“Your Highness, this is not a threat! His Majesty has summoned all your siblings today. If you don’t get up, I will really go get the head maid!”

Still wrapped in my blanket, I let only my head pop out.

I’ve been living as a prince for about 14 years, but because of my “decadent” lifestyle, people call me the “Trash Prince” behind my back. I have only been summoned like this three times my whole life, this time included.

I got so surprised my tongue fumbled. My daily routine is composed of four elements: loaf around in the garden, sleep, eat, take long baths. Needless to say, I know next to nothing about what goes on in the outside world. It was my first time hearing that the neighboring country was at war.

That was quite a long sigh. Come on, how could I? I’m not interested, why should I care about the neighboring country anyway?

“Your Highness, I am sure you are at least aware of the fact that the neighboring kingdom of Afillis has had a close relationship with our kingdom since ancient times.”

“Ah, the kingdom with the princess obsessed with winning over my older brother, right? The boar princess. I don’t go to parties often, so I only remember her from when I was little.”

When I finished talking, Ratifah’s face came closer, and she looked at me straight in the eyes.

“Do not ever! Address a princess from a neighboring kingdom with terms such as “boar”!!”

“O-okay, okay, then stampede cow princess it is…”

“I’m the one who wants to sigh here…”

Come on, what else could I say?

What is a sword? What does it bring forth?

What else can I call someone who doesn’t know anything about it, but keeps blindly charging forward? Calling her a boar is pretty much a compliment.

My mentor would have definitely called her a bringer of death, a “reaper”. That’s the same as what I think anyway. My mentor’s way of thinking and mine were very similar. That’s one of the things I was proud of.

“Okay then, the neighboring kingdom is in a dire situation. But why do they want me? What use can princes and princesses be anyway? Me in particular.”

Like a mother explaining patiently to her unruly child, Ratifah sighed and started speaking.

“Our kingdom and the kingdom of Afillis—”

With calculated timing, a voice interrupted Ratifah. A voice I knew.

I tossed the blanket I was wrapped in to the side and hurried towards the window. It took me 0.2 seconds. My goal was to unlock the window…but before I could, the door was fully opened.

“I have come to accompany you, Your Highness.”

A woman wearing the same maid uniform as Ratifah. She seemed younger than the 24 year old Ratifah.

“Finally you show yourself!! Demon cougar in little girl form!!”

“That is not the proper way to address a lady. Allow me to add that the window’s lock has been modified.” 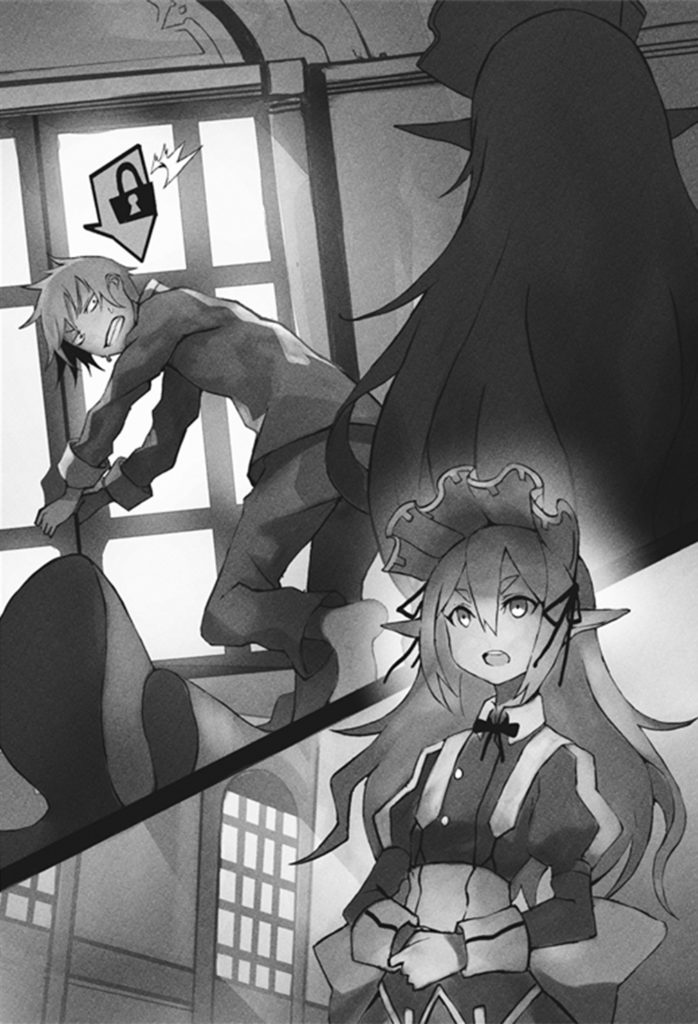 “There’s still some time. I suppose I should educate you a little.”

“I shall cooperate to the best of my abilities, head maid.”

“Oh my, much appreciated.”

We met for the first time about 8 years ago. Since I hated crowds, I avoided going to parties as much as possible, and one day a maid came to talk to me. The girl in maid uniform was lost and said she had to go to the party’s location, so I had no choice but to take her there.

She seemed like a pure and innocent girl at first glance: I would have never thought that she had actually been sent by my parents to make me go to the party. I’ll never forget her smirk when her deceit was revealed.

At first, I thought it was just a little prank by a cute and slightly clumsy young girl, so I didn’t mind it too much. In reality, however, she was already over 100 years old.

From that moment onward, I could not trust maids anymore.

While I indulged in such recollections, Ratifah captured me.

Okay, I’m going to get you switched after all. There isn’t a shred of loyalty in your heart, is there?

“I suppose we should start by having you address me as lady Feli?”

After the slap’s sharp sound, I flew onto the floor.

“I keep hearing things wrong lately. Let us do it again.”

After another powerful double slap, I was sent flying again.

“….fine then. Let us offer you as a sacrifice to His Majesty.”

“D-do you understand what you’re doing? What happens if you use violence on me!?”

It would be a pain to be sacrificed just like that, so I ended up talking back like the vilest small-time villain could. I’m still a prince, after all. If a mere maid dares to hit me…

“I have received permission, actually: when accompanying Your Highness, minor injuries will be overlooked. Please do not worry about me.”

“You have brought all of this upon yourself. Let us go now.”

I was grabbed by the neck and, despite my desperate resistance, I could do little against the brute strength of a grandma over 100 years old.