A black wave of violence filled the surroundings.

Looking at the swords raining down, each one precisely targeting the man, I slowed down and roughly lifted my “Spada,” just a little.

The ground under my feet cracked slightly. At the same time, I swung my “Spada” and shouted.

“Tear him to pieces—”

My body itself did not show any changes.

Even so, I felt something nostalgic.

The days I spent doing nothing but swinging my sword felt so close. I even started feeling that I couldn’t lose to anyone now.

I swung and a crescent blade formed from the tip of my sword.

A crescent slash, much stronger and faster than the one I used against Feli, rushed forward, mercilessly carving a crater through the ground and leaving a grinding sound in its wake. It was like a mass of killing intent. 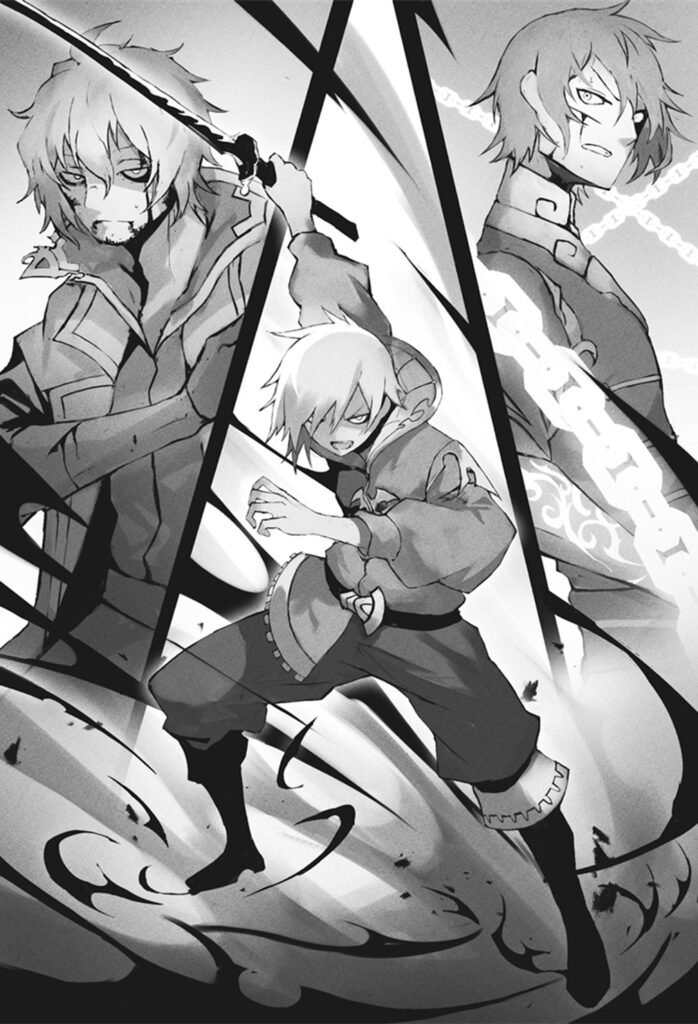 In the cloud of dust raised by the “Spada” barrage rained down on their target; I spotted the man in a white coat at the side.

I remembered his name.

Through our conversation, I concluded that he could be worthy of trust. Thus I called his name.

I chose a large-scale attack to distract the opponent’s attention: there was no other time than this to talk.

“I don’t need any dead-weight. Take the prince and stand back.”

I decided not to ask Rowle to protect Feli and Grerial.

The decision not to say it was an expression of my resolve. The resolve not to let the enemy focus on the people behind me, not even for a second.

A trembling voice reached my ears.

“Why are you here? Answer me! Grerial’s little brother!”

Welles already felt guilty towards Grerial, because of involving him in his circumstances.

What would happen if both of us brothers were to die here? He did everything in his power to keep me away from this place. What if his friend’s brother died too? Welles’ question surely came from such thoughts.

The reason why I was here.

The reason why I came here.

It was the most obvious reason possible.

A reason that never changed, since a long time ago.

The cloud of dust was gradually clearing.

I lifted my “Spada” over my head, little by little.

I didn’t need to say anything for my “Spada”, my eerily shadow-colored blades, to start appearing all around. As soon as the dull glow of my swords formed, they aimed once again at the spot they had recently rained down upon.

The emotions, the desire that could not be fulfilled before were filling my heart. In my head, I could see flashes of faces of people. They appeared one after the other as footage played at fast forward speed.

I prayed for my emotions to reach them somehow as I swung down my “Spada”, a feral smile on my face.

I laughed and shouted.

Because I swore that I wouldn’t fail again—

The next instant, another black wave crashed down.

Their destination was the same spot as the previous rain of black swords.  They carved into the crater.

Before the field of view became clear, my “Spada” rained down again.

I could hear a crunch-like sound from the target. Like shoes stepping on sand.

I quickly breathed in once, in order not to inhale dust, then pointed the “Spada” I was wielding down.

For just a second, I released my strength and assumed a natural stance. Then, as if turning the tempo from slow to fast, I rushed ahead at full speed, without any preliminary motion.

I exhaled the air in my lungs as I ran, delivering first a powerful swing, meant to test the waters.

The following strike was a diagonal slash. The sound of clashing metal and swords grinding against each other could be heard.

“…now this is a very different kind of guest we have here.”

Our forces pushed against each other.

In response, the veins on my arms bulged slightly.

What was? My stance towards killing?

Or maybe the fact that a smile was always glued on my face?

Or maybe it was about “Spada”?

There were too many possibilities for me to guess what the man meant.

His words, however, irritated me a bit.

Impressive that you feel confident enough to talk to me like that, I thought.

That confidence gave me that little bit of irritation.

I concentrated more power into my sword arm.

An inhuman strength pushed me back.

A stain of blood surfaced on the man’s clothes.

It was probably a wound caused by the previous “Spada” attacks. It looked too shallow to be, but I discarded such thoughts and focused even more power.

The man’s slashing wounds reopened and distress showed on his face. I focused all my strength in my arms, in order to win the clash, then shouted to rouse myself.

The man tried to deflect away the strength coming from my sword, but my blade coiled around his like a snake, not allowing any escape.

As I whispered this to myself, the ground under my feet cracked.

The man couldn’t probably endure it anymore and was blown away backwards.

It wasn’t over yet, however. I followed up immediately with the next attack.

I launched myself forward with a powerful thrust against the ground, almost as if I was diving, towards the man who was crashing and rolling on the ground.

Different from the previous shout, my voice was now very quiet, almost chilling.

A single sword rose from the man’s shadow.

He had let momentum take control as he was blown away, but was now forced to abruptly stop, his body shaking wildly up and down.

He then turned completely still, just like a stake had been driven through his body.

The sky and the ground, even his field of view had been spinning around him: when he thought they finally stopped, he saw me appearing before him, eager to kill, and a shocked expression appeared on his face. He hurriedly tried to resist, to no avail.

From above the man— at a very close distance, my “Spada” drew an arc in the air, a sword streak aimed at the man.

A slash without mercy.

A strike without any hesitation or guilt, specialized solely to kill, is unleashed together with words brimming with intent to kill.

A voice filled with obsession close to pride brushed past my ears.

It curiously came at the same time as the “Spada” stabbing the man’s shadow fractured.

Or rather, it inevitably did.

My “Spada – Shadow Bind” was a highly versatile technique.

There was nothing it couldn’t do.

Even so, under enough stress, the “Spada” would break down and the “Shadow Bind” would be undone.

However, there was one thing.

One thing I could say.

As I turned around, fresh blood danced in the air.

As the spurts of blood flew everywhere, I definitely felt the sensation of my sword cutting through flesh.

At the same time, however, there was something unnatural.

I was definitely going for the kill.

I swung my sword to sever the man’s body in two.

However, the sensation I felt in my hands was not complete.

The sound of heavy breathing reached my ears.

A few meters away from me, the consequences of my slash were apparent.

“That was too damn close…”

My sword had reached its target.

It had only cut through flesh, however.

My last attack failed to reach the man’s internal organs.

The man’s expression did not show any pain.

I already pointed the blades of my floating “Spada” towards the man.

“That thing again? You got no class, man—”

At the same time, I closed in dozens of meters of distance almost instantly.

One moment later, I could hear the sound of swallowing breath.

Despite his bewildered expression, the man managed to parry with his sword.

Once again, our swords clashed and ground.

A fierce clash of power. Again and again, our swords met and clashed against each other, making sparks fly all around.

The man, his lips twisted into an ecstatic smile, cackled loudly.

I laughed too, just as loudly.

A contorted smile on my lips.

My mouth was stuck in a wide grin, as if crossing swords like that was so overwhelmingly fun.

“Unfortunately, we would be out of place there.”

Rowle spoke, a cold tone in his voice.

“Maybe if you could utilize ‘Phaeresia’ to its fullest things would be different. But as you do not yet know how, you would just get in the way, Your Highness.”

Welles could not oppose Rowle after witnessing what looked like a blur of swords to him.

“I believe she knows quite a bit about this.”

Rowle glanced at the female elf who was keeping the prince calm to heal him, despite the latter being eager to run off towards the battle.

“Since she received that black sword from Prince Fay, she might know something about his circumstances.”

At the very least, she surely did not receive it without knowing anything.

“Fortunately, at present, the situation is not bad for us.”

On the contrary, we could even say we are at an advantage.

So this was not the time to worry — so Rowle tried to convince Welles.

“We can always go to provide support if it is necessary”

“In addition, we don’t know how Princess Lychaine and Zerum’s search for the flower is going. If we can’t act all together when needed, then it would all be pointless.”

Welles remained quiet, a stern expression on his face.

His expression showed how he wished he could go help Fay immediately.

The man had probably been holding back before: his reaction speed, the speed of his attacks, all of his movements were much superior now. Welles could keep up with their movements, but if asked if he could fight at that level, sadly he would have had to shake his head.

Relieved after obtaining at least Welles’ understanding, Rowle sighed. He looked in the distance and spoke.

He then turned towards the fierce flurry of battle in the distance.

Rowle too had heard the rumors about Fay Hanse Diestburg, the whole “Trash Prince” spiel. He had never heard a single good rumor about him.

However, that was only until recently.

This negative image suffered a lasting blow after the recent war in the Afillis kingdom.

Afillis was in a clear disadvantage, and everyone thought it would be ravaged by the enemy.

A certain person, however, single-handedly reversed the situation.

A person whose name was not made public.

Nothing about this person or their exploits was divulged.

The war’s course changed after the reinforcements from Diestburg reached the battlefield.

After his arrival, a force of ten thousand was driven away and Idies Farizard, the “Game of Illusions,” a very well known “Hero,” was killed. The news spread like wildfire.

The battle unfolding before Rowle’s eyes provided a new piece to solve the puzzle.

He was surely a person that did not take pride in their war exploits, nor did he want to boast about them. He probably did not want to stand out: it was enough for him to protect the people he cared about.

It was a rather curious way of thinking for the people of this era.

What led him to such a way of thinking was surely a painful experience, or so Rowle thought.

To save others with medicine.

To save others with swords.

The process was different, but the result was the same.

Rowle too failed to save others. Seeing such bonds before his eyes, he felt his chest tighten in pain.

Before he realized it, his fists were clenched.