In the heart and in memories…

In both of them existed various “locks”.

If one’s heart opened to someone else, the distance between them became much smaller. If locked memories were released, they would overflow just like a river rupturing through a dam. Locks that worked like that.

Something ground and grated.

Various scenes flashed in my head. They all lasted an instant before moving to the next in rapid succession.

A torrent of memories came alive in my head. Memories that had lost color and clarity returned more vivid than ever.

The “Abominations”, ultimately destroyed by the people I held dear at the cost of their lives…once again they now appeared before me, as if mocking my belief that it was finally all over.

Not out of fear, nor out of anticipation for battle.

It was pure, unbridled rage.

I was angry. From the pit of my stomach to the bulging veins on my forehead.

What held my body together was the regret of being protected and having survived until the end by myself as well as the desire for atonement.

The power to live on.

More power, to protect my mentor and the others.

That was my ego.

But because it was all ego, I couldn’t allow something like that anymore.

I knew well it was a childish emotion.

But I couldn’t stand it.

I couldn’t stand seeing “Abominations” before my eyes. Not for one second.

What I desired was nothing but their utter annihilation, no matter the cost. I gripped my “Spada”.

—Show me what kind of “resolve” you’re carrying!! 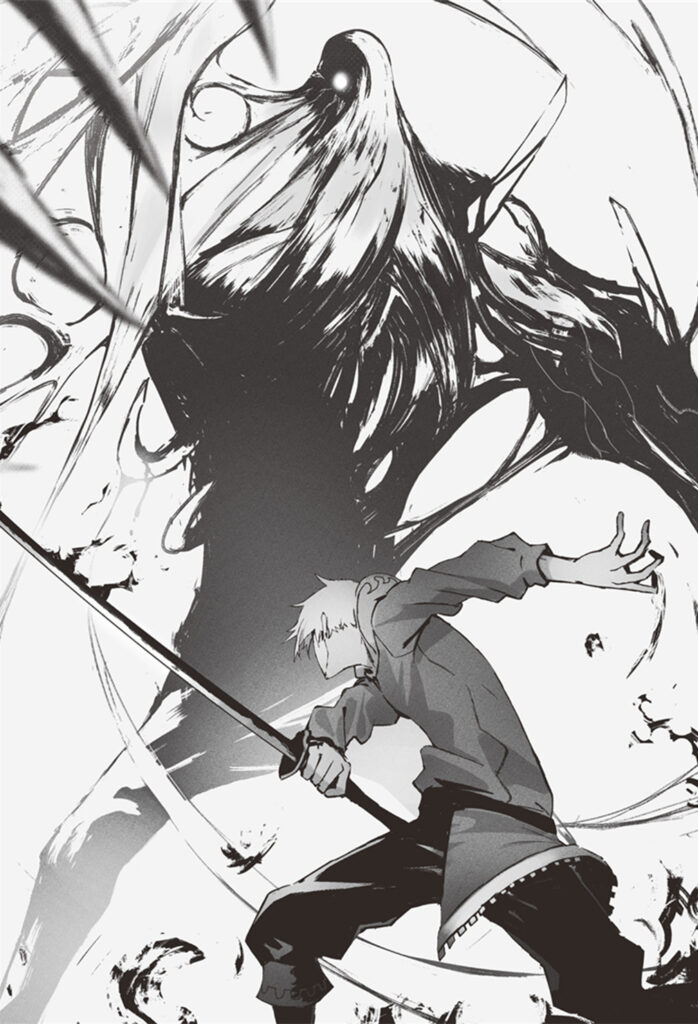 I recalled the words of the vampire bastard who completely denied my way of life, Velnar. And the sight of going through with my beliefs nevertheless.

A way of life honest to the point of stupidity, obsessed over the past.

If anyone could see my heart, they would probably say the same things Velnar did. They might even try to console me.

But that was good enough for me.

Because that whole way of life, everything — including the past — was what formed me, Fay Hanse Diestburg.

Thus I would cut down the “things” before me.

I would slice them to pieces. Negate them.

There was nothing my other half, my “Spada”, could not cut apart.

A familiar sensation was on my hands.

The deeply familiar sensation of cutting through flesh

Sprays of fresh blood dancing through the air.

The “Abominations” — humans turned monsters, whose muscles swelled as soon as they ingested the black pills, losing all reason in the process — had been torn to pieces.

Monsters had given up on all intellect and reason in order to achieve superhuman strength. Monsters who had been cut down by slashes too fast to be seen.

My voice was terribly calm.

Calm, yet filled with resentment at the same time. I called my “Spada”.

The monsters’ shadows were soon affected.

Their bodies had grown over three meters in size, swelling to the point their former human silhouettes were nowhere to be found.

Having lost all intellect and reason, they were now governed only by the instinct to fight and destroy. They were strong, without a doubt, but strength was all they had: they were not fearful existences at all.

Their muscular power was above and beyond human limits. They were extremely agile despite their massive size, making up more than enough for the mental faculties they had lost.

This was also their weakness, however.

One of the “Abominations” was writhing in pain, its chest had been sliced and torn with fountains of blood spouting from its wounds.

It probably sensed the “Spada” rising from its shadow and leapt away, rushing towards me to attack with its dreadfully sharp five hooked claws.

That was indeed the “Abomination’s”’ weakness.

Because they lost their rationality and intellect, they could be easily *lured* into acting as one wanted. Moving and acting was all they could do.

The trunk-like neck of the beast was cut.

The blade of my “Spada” sank in its hardened skin as blood sprayed from the newly formed wound.

Her trembling words were followed by the sounds of something heavy collapsing on the floor. The ground shook.

The “Abomination” before me was already dead. It could not even scream in agony: the pools of blood were the only proof of the result.

Together with the head rolling away from its neck.

Idies was speechless at how quickly it ended. I raised a foot — and stomped.

A squelching sound, just like stepping on overripe fruit, could be heard.

The lifeforce of “Abominations” was far superior to the average human.

As long as the source of the signals commanding them, their head, wasn’t crushed, they would keep moving even decapitated.

“You…you damn well know that’s not what I asked…!!”

“That’s the answer though. To be unable to conceal my anger at those “things” is proof of what I am. Undeniable proof.”

“I am who I am, thus I kill them. Every single one of them. I will never allow them to exist. Never. Not them. Not this reality. Not this sight.”

I focused more power in my grip.

This bloody body of mine is so corrupt that it can dispose of things just by killing them. It was good enough for me though.

As long as I could eliminate the “Abominations”, it was enough for me.

I directed my smoldering anger and continued with a glare that could kill.

“This time I will definitely kill you.”

I was one step away from losing my mind to anger.

The intent to extract information about the black pills and the desire to utterly annihilate the sight before my eyes. I desperately struggled to not lose my reason as these two driving forces clashed inside me.

Idies Farizard and the other two “Abominations” simply looked at me without moving. They were probably waiting for the right opportunity.

I focused on her illusions. As soon as I felt something was off, I pointed my sword without hesitation.

“You’re not getting away this time…!!”

Idies probably tried to use her illusions to make her escape, but a “Spada” appeared to block her way, thus she couldn’t help but react with irritation. Her silhouette in front of me disappeared and she appeared again out of thin air a few meters away, hurriedly jumping away from my “Spada”.

It was an effect of her illusions, no doubt.

I stepped firmly on the ground, ready to launch the following attack. It was probably seen as a signal to start the battle as the other two “Abominations” leaped at me.

As if reacting to my will, countless “Spada” rose from the shadows at the monsters’ feet, piercing their bodies at incredible speed.

It was so vague that people would probably laugh if I tried explaining it, but I felt strangely confident.

I swung down my “Spada”, apparently cleaving through empty space.

It did not miss its target.

Idies Farizard’s body was slashed diagonally as blood spurted in the air.

— See that? Your “Spada” can really cut through anything.

The familiar words of the man with dreadlocks, an illusion user like Idies, echoed in my mind.