Round and round, again and again.

Days, months, years…time traced the same circular motion, on and on, forever. People witnessed it, learned from it.

Eventually, they all said the same words, with dried, raspy voices. History repeats itself. With hollow expressions, void of all life, they repeated the same piece of common knowledge.

One day, will a world where people don’t have to pick up a sword to live really come? Whenever such a question was asked, everyone replied the same way. Before the scattered lumps of murdered flesh and the smell of rust and death.

“In the end, no matter how deep you dig into them, emotions are emotions. Nothing else.”

Vincenz — my mentor spoke while looking up, his eyes narrowed, at the darkly glowing sun.

My mentor explained to me that a person’s world was completely defined within the limits of their own self.

The reason why he could say that so confidently was —

“After all, the only thing that can truly prove sanity or insanity is one’s own words. Even if other people say someone is insane, if the person in question claims to be sane, then they are. Sane, without a shred of lies or falsity.”

— A pitiful sanity that no one believes in, though.

My mentor added such words in a whisper.

“Some idiots ruin themselves because of fleeting emotions. Other people are brainwashed or have ideas forced down their throats. Others run away from themselves by turning into “Abominations”. I’ve seen all sorts of people. Living is nothing but suffering…I couldn’t blame any of them. I couldn’t change anything, so I have no right to blame anyone…but there is something I must say. Right now, without a doubt, I am — I am sane, Shizuki.”

My mentor’s soft smile floated before my eyes.

The gentle smile of the man I admired, and who was my mentor.

“You know my reason to live, don’t you? I am close to reaching it, finally. The worries and concerns I carried for so many years might be dispelled. You should know that already, Shizuki — and precisely because you do, you are crying, right? Your weakness never changed till the end… “

My mentor talked as if the end was near. No…the end had truly come.

That’s why the feelings tightening my chest, ignoring my attempts to put up a front, were trailing down my cheeks.

“Live, live, live, survive. You will find an answer at the end…that’s what I taught you, Shizuki. I still think the same…even so, even so, right now, I am definitely sane.”

My mentor repeated that his choices were not repeated by a shallow burst of passion or blindness.

“So I can’t listen to your words, Shizuki…”

Stop it, I wanted to scream.

But I couldn’t say anything.

I couldn’t do something as simple as uttering a single word. Because no matter what I said, I was resigned to the fact that I couldn’t change the approaching future.

I knew well that, even if I screamed at him to stop, my mentor wasn’t going to listen. His resolve was firm, there was no turning back anymore.

My mentor had probably already lost his sanity.

He was probably aware of it too, somewhere. That’s why he kept telling me he was sane, again and again.

I knew that those words weren’t the truth, but all I could do was bite my lower lip. I loathed my own powerlessness.

“Don’t make such a face. Every beginning has an end. There are no exceptions. Sooner or later, the time to say goodbye will come. That’s all there is to it, right? It’s always like this, no matter the age you live in.”

“I do understand your feelings, Shizuki. I couldn’t explain these feelings without some hesitation either…but I can say this. Right now, I am definitely sane.”

My mentor was standing before me. In my eyes, he was shrouded in an eerie light. That glow could only be born of insanity. My mentor, however, looked at me and kept telling me he was sane.

— if he really understood my feelings, I didn’t want him to say those words.

I didn’t want to hear what he was going to say.

“This is my first and last request for you.”

Why do you have to use these words at this time? You never said to me something like that until now…!

“Don’t rob me of this chance to *die properly*.”

My mentor intended to die. I felt it in my heart somewhere, but now that worry turned into reality.

At the edges of my field of sight stood countless “Abominations”. Their growls and roars shook my eardrums at the same time as my mentor’s words.

“Maybe you don’t fully understand my words now, but one day you will…honestly speaking, I wish you won’t understand until the moment of your own death, though.”

But that’s just a selfish wish of mine.

You will understand one day, Shizuki…you definitely will.

My mentor talked with a sad tone in his voice. I understood that he was speaking honestly, from his heart.

His eyes narrowed, his lips curved into a smile. My mentor showed me a true smile, without a trace of regret.

“I thought my life to be empty and meaningless, but thanks to you all, it gained color. It gained meaning. You made me realize it.”

“Thanks to you all, I could live until this moment.”

Every time we exchanged words, I realized even more that I couldn’t do anything to change my mentor’s resolve. Not one of the words I desperately formed to stop him managed to reach their target.

…I couldn’t help but cry and wail loudly at the cruelty of that situation.

“I’ve always been a weakling, you see. I can’t begin to count how many times I thought of escaping in the arms of death. Because I was such a hopeless weakling, I was blessed with a hopeless bloodline technique.”

I knew that my mentor wished to die. I saw it in his expressions and gestures sometimes.

“I was just a fool, always thinking about how I could end this miserable life of mine. But one day, out of pure chance, I made a connection with another person…and couldn’t turn my back on it anymore. On the contrary, it felt so nice to sink in it.”

— because of that, eventually, I began living with the goal to exterminate all “Abominations”.

He added that with a chuckle.

My mentor smiled broadly as if to show me proof of his words. We lived together for several years, a period long and short at the same time…but I had never seen him smile like that before.

My mentor stretched his hand and wiped my tears.

But I was going to lose that warmth very soon.

That was probably the reason why…

…despite my mentor’s words of consolation, my feelings were still twisted in pain.

“It’s not anyone’s fault. There’s no one to blame. Nor do I have any intention to. We were too weak, we weren’t strong enough…there’s no need for such regrets. But if I can say one thing…I’m the one most at fault here. Because I always was a weakling.”

I finally managed to utter those words, but I was interrupted. I couldn’t find anything to lean on.

“Looks like there’s not much time left…pretty surprising, though. The identity of the “Black Peddler” that we’ve sought for such a long time…turned out to be that *sun*.”

My mentor then looked up to the defiled sky.

A bloated sun stained in black looked down at us. It grew closer and closer, little by little.

It was not exactly correct that the sun was the “Black Peddler”’s true identity.

“The “Black Peddler”’s goal is to bring salvation to the world. I always thought of him as a madman who thought turning people into monsters would save them…but never imagined he could have such an ace up his sleeve. Indeed, this can probably save all of humanity…by giving an equal death to one and all.”

“But to be saved by the one man who forced us to see so many revolting things until now…I simply hate the idea.”

And so, my mentor…

“Thus I will reject that salvation of his. I will spit on his disgusting, egotistical idea of mercy.”

For some reason, my mentor’s expression was relieved. His following words explained why.

“It’s weird for me to say something like that, though. Thanks to the ‘Black Peddler’’s salvation, I can do something as grand as to die while protecting someone else.”

My mentor laughed in a self-deprecating way. Ahaha.

“Even someone like me can die for someone else. Yeah — it’s way too grand.”

“Thanks to you, I can laugh like this. I don’t have to end in a pathetic way.”

He simply stated the truth. It was something normal, natural, but also so cruel.

…I wished he would have lied. Even if I could have figured it out immediately. “This is not our final goodbye”. I wished.

Those were probably going to be his last words.

“I told you before, right? That history, meetings, goodbyes, everything repeats. All beginnings have an end. After a goodbye — a new meeting will come. I’m sure this won’t be the last time. We will meet again.”

I don’t know when, though.

“So there’s no need to cry. Besides, I’m always at your side.”

My mentor then placed a hand on the “Spada” at my waist.

“I received, inherited, and pass on…my sword has already been inherited by you.”

That smile, so unlike him, was so painful to see.

My mentor then turned his back to me.

“I was blessed, really. At the very end…I was repaid for everything!”

His words, his tone, felt brimming with excitement. My mentor, who was always cool and composed…

“Thanks to you, the weight on my shoulders had become really light. Thanks to you, I can smile like this…! I didn’t think I would ever say something like this in my lifetime…”

Then words filled with nostalgia and melancholy.

His back, which always seemed so large, disappeared into the distance.

His voice became fainter and fainter.

As if we were going to meet the next day as if nothing had happened. That’s the impression I got. A casual goodbye. But I couldn’t reply to it.

I did my best, endured the pain, put up a front, forced my face to make an expression.

I forced it into a murky smile.

Because that’s what my mentor taught me.

Because I thought it was the best reply I could give him.

I thought I heard those words. Like a window doused in rain, my sight was blurry, twisted. I couldn’t see much. 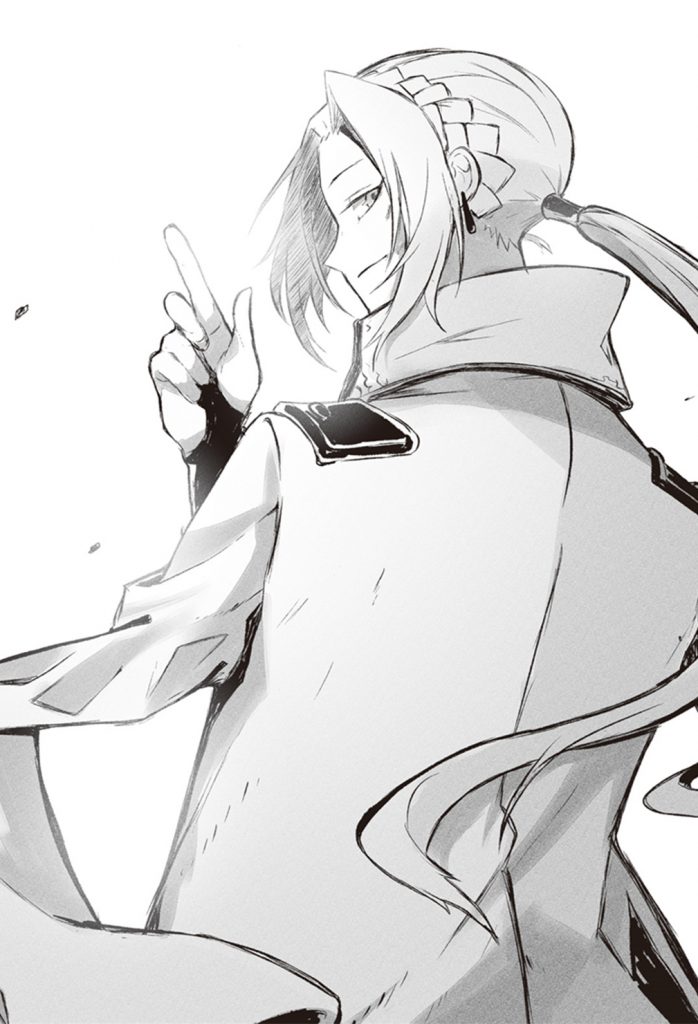