I glanced at Elena, walking at my side, as I asked Cohen a question.

If we didn’t have a particular destination, it was surely better to take her out of the ruins as soon as possible.

Based on the current situation, however, it was probably impossible to do that right now.

“…hey, Cohen Socaccio. Why did the empire call Elena here?”

I knew now why Cohen wanted to protect Elena…but still couldn’t see why the empire targeted her.

It would more or less make sense if they planned to take advantage of her position as the former princess, but judging from their conversation until now, that was clearly not the case.

Cohen answered my question as if I asked something utterly obvious.

“Because she’s a victim.”

I thought I heard him sigh after he replied.

“Exactly. It seems that the quality of the ‘Abominations’, as you call them, depends on the person that gives birth to them. An average person turns into an average monster. If they have high magic power, they turn into a more advanced monster. Finally, an ‘ingredient’ that feels despair towards the world turns into an especially powerful one.”

Cohen stole a glance at Elena.

“A combo of high magic power and despair like her makes for an exceptional match. The empire would surely consider her the finest quality ingredient, right?”

For someone like me, who thought only of cutting them down, killing them, putting them out of their misery, Cohen’s information was completely new.

Thinking about it, it made sense. It was probably the truth.

“If that’s how it is, then she has to be protected at all costs.”

“Please do that. The moment Elena turns into an ‘Abomination’, these ruins turn into rubble. I can see it in my head.”

Technically, the ruins were in Diestburg territory. It wouldn’t be good if they were destroyed, and I had also developed a sort of attachment to them. I certainly didn’t want them gone.

“So, I don’t care if you have to be forceful, get her out of here quickly and— ”

Cohen didn’t finish his sentence. An eerie silence filled the surroundings instead.

The sound of pebbles being kicked and bouncing on the stone floor drifted towards us from a distance.

Followed by a gust of wind.

A breeze that chilled the skin as it caressed it, just like the northern wind.

The approaching presence caused a trickle of sweat in me. My instincts told me it was time to move.

Cohen’s sudden order made me almost reach for the hilt of my blade, but I stopped.

I replied to Cohen’s irritated-sounding question in the opposite way, with a flat tone.

Once we entered the ruins, I had become Elena’s bodyguard.

If I didn’t draw my sword I had a better chance of deceiving my opponent, maybe even trick them into letting their guard down.

… in order to ensure Elena’s escape from the ruins, the best method would be for me to fight against the enemy, but…

“You don’t want to see these ruins get destroyed, do you?”

Together they clearly expressed how the approaching person wasn’t a normal human being.

Fighting them head-on would have definitely brought destruction to the ruins.

I continued, a grin on my lips.

“My sword isn’t that cheap.”

— One slash, one kill. My heart, my body is forever a battlefield.

Fay Hanse DIestburg will never lie before this oath.

My sword is drawn only when necessary.

And I concluded that at this moment *it was not*.

That is what I meant.

After a few seconds of surprised silence, Cohen looked away from me, a conflicted expression on his face. He probably understood that it was pointless to say anything else.

I thought I saw a mixture of curiosity and resignation in his eyes. As if he was looking forward to seeing what I could do.

“Haha…you don’t like people with big mouths? Personally, I think it’s better than people who always second guess themselves.”

Words that mocked me from a long, long time ago, who used to say “I can’t do it” almost out of habit.

I knew that no one else but me could understand the irony in those words, but laughed openly all the same.

My duty was to escort Elena safely out of the ruins.

The ruins were protected by a barrier of illusions, likely created by Traum.

I knew the unique traits of his illusions, to a degree, so I was sure that exiting the ruins would effectively ensure her safety.

I was considering such thoughts, when—

“Be careful all the same. Never let your guard down.”

Cohen warned me again, with a tense tone of voice.

“There aren’t ranks among ‘Heroes’, but if I had to make a ranking—  ”

Cohen’s next words were interrupted by a low, bellowing roar.

With the sound of something cracking and shattering, the air around us decreased in temperature.

“In terms of pure fighting power, ‘Ice Coffin’ is definitely — number one.”

While Cohen finished talking, I had already quickly moved to Elena’s side.

The reason was the silhouette I saw in the darkness ahead — where the light of the beacons did not reach yet.

It was large enough to belong to a *giant*. My instincts told me it was not an opponent to look down on.

The next instant, a large, grinning face emerged from the shadows. A smile well-fitting a devil from hell. 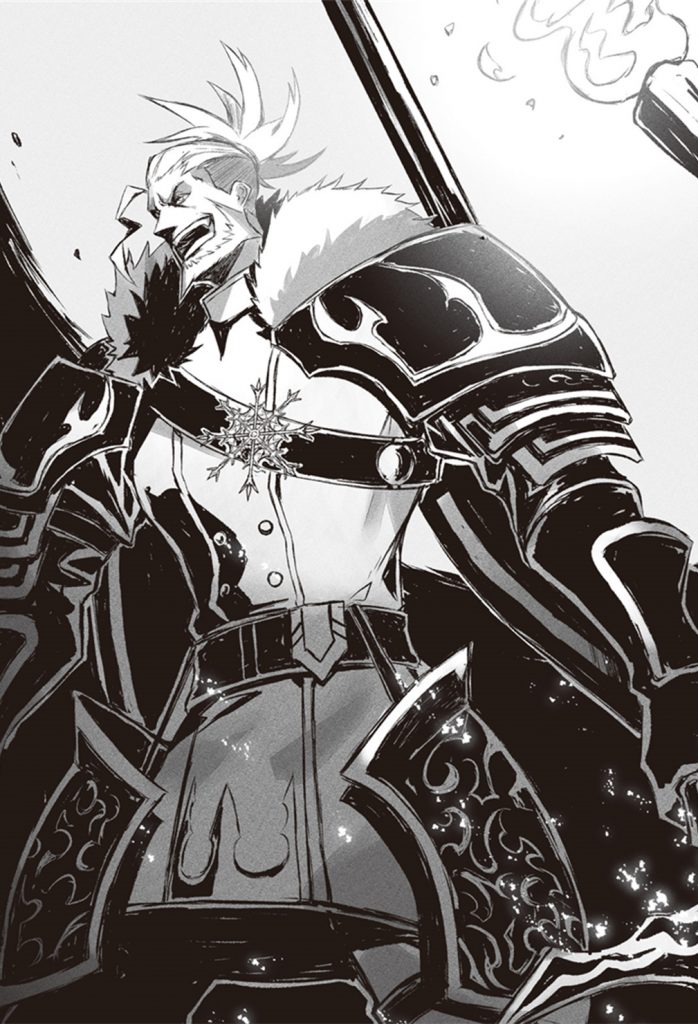 “We’re getting out of here, Elena.”

My following actions were executed as quickly as possible.

I grabbed Elena, who was still standing there with a hollow look in her eyes, and without waiting for the reaction of her subordinates Ulle and Ream, attempted to leave.

Human beings cannot help but react with hesitation to sudden events. At least, that’s how it was supposed to be.

“…ooh? Looks like there’s a mischievous rat in here.”

A fierce impact and shock, caused by the large man powerfully stabbing the ground with the blunt end of his spear.

Based on his words and reaction, I had to conclude that he noticed my presence. The hastiness of my decision was revealed for all to see.

…I guess it wasn’t a good idea.

It wouldn’t be wise to try to slip past the large man and head for the exit of the ruins.

That would be a normal decision in this situation — yet I did not stop running, aiming to leave the ruins as soon as I could.

“That girl belongs to the empire. Put her down, boy. Now.”

“Say what you will. I’m getting out of here, no matter who you are.”

I rejected the large man’s words, rife with intimidation, and kept running.

Elena was muttering the names of her subordinates, but not even I could be expected to take care of all three of them at the same time. I could only hope they handled themselves somehow.

“I don’t know if you are her subordinate or what…but the precious chance created by Heart Scan can’t be squandered like this, see?”

A cracking noise hurt my ears. I could hear echoes of it before, but it had now turned into actual, clear noise, grazing my ears.

I already knew this man’s nickname.

Ice Coffin. It was easy to imagine what could have led this man to be called a “Hero”.

“I’m going to cut off those legs of yours, hope you don’t mind.”

Following the sound, the ground below my feet was suddenly covered — in ice.

After I lost my balance because of the ice, he would cut off my legs with a sweep of his spear. Something like that.

The situation was getting tenser and tenser. The surroundings were covered in darkness. I couldn’t see Ice Coffin’s face clearly, but I could tell that he was much older than me. His composed battle stance also showed that he was certainly not a beginner in terms of martial arts.

In my heart, I derided him utterly and completely.

I knew well enough how dangerous it could be to run away with your back to your opponent. Only an utter fool would act like that.

So I did all I could to avoid that situation. It was an ironclad rule when running away.

— Elena still on my shoulders, I twisted my body in midair.

With acceleration too sudden to be anticipated — I closed in on my enemy in an instant, then unleashed a razor-sharp kick to the large man’s head.

I did not hold back at all.

I put all my strength in that blow, without reserve.

The kick took Ice Coffin by surprise, making his eyes tremble for an instant.

He reacted by reflexively holding his spear forward, in a defensive posture.

My kick struck the spear, so he quickly switched to a different stance.

The clash, however, lasted only seconds.

It was soon broken, sending one of its participants flying—

“I thought you were the type that relied on physical strength.”

As I uttered these words, Ice Coffin’s giant body was blown backward.

The ruins were much larger than their exterior appearance suggested. Inside, only the bonfires set at regular intervals provided any lighting. The number of bonfires was definitely too small for the size of the ruins: as a result, they were immersed in total darkness for the most part.

A sudden blow delivered in an environment with such poor visibility.

Maybe things would be different in a normal situation, but in these circumstances, it could be considered fatal.

“…that was a bit rough, but you’ll have to forgive me.”

Ice Coffin was blown away and ultimately produced a low crashing sound. Followed by the sounds of something crumbling.

I apologized for causing damage to the ruins, then quickly tried to resume my escape, when—

A terribly calm, cold voice resounded in the surroundings.

“Hahaha…HAHAHAHA!!! That was one heavy blow! To think I’d see the day when someone as small as you bested me in strength! Anyhow…that woman stays here.”

Followed by words of glee.

While the man talked, an icy mist started trailing in the air towards me. Thin and sharp ice shards appeared everywhere, producing crackling sounds.

Before I realized it, that hail-like mist had covered my field of sight.

The only path leading outside was now precisely sealed. As soon as I realized it, I felt my facial muscles tense up: to hide it, I forced my lips into a smile.