“I’ll think about it after you hug me again.”

Schnee’s rebuke made Shin realize that he had joked enough, so he let her go.

Still blushing, Schnee went to the kitchen to prepare dinner. When the meal was ready, she had returned to her usual self.

After dinner, Shin went to check his gear. He didn’t think there would be problems, but the enemy was a devil: there would be no harm in facing the battle in the best state possible.

“There’s no real damage, but the arms and legs part were consumed a bit, after all.”

The greaves, having walked over Avaritia’s 【Life Draining Sludge】,  and gauntlets, which had clashed against the devil’s knuckles, had slight decreases in their endurance values.

Thanks to their anti-devil attributes, the decreases were very small. Without the right preparation, fighting devils were always very taxing.

The 『Holy Armor – Vanquisher of Evil』 wasn’t too affected, so Shin simply used his blacksmith skills to perform minor repairs on the simpler broken parts, such as fittings and decorations.

『The Ark』 was more damaged than the armor, but there would be no problems even if it was used as is. Shin disassembled it to make sure there was nothing wrong with it, but judged its condition was perfectly okay.

Shin took Schnee’s equipment and materialized it. He checked 『Daybreak』 first. Schnee had attacked only a few times, so its endurance was unchanged. Even after disassembling it, there were no problems.

He put 『Daybreak』 back together, turned it into card form, then moved on to 『Shinobi Gear – Vanquisher of Evil』.

Shin was carefully checking the gear, as he did with all other items, when he realized that Schnee looked very embarrassed.

Despite her reply, Schnee was still looking away: she clearly had something on her mind.

“If there’s anything that concerns you, say it, I’ll fix it.”

“Well…there’s nothing I have to say about the item itself. It doesn’t get stuck anywhere, it’s actually really easy to move in. It’s just that…seeing you check it so thoroughly, it’s like…you’re looking at every nook and cranny of my own body. It’s embarrassing, I feel kind of bothered…”

『Shinobi Gear – Vanquisher of Evil』’s endurance was unchanged. There was no problem with it as an item, just like Schnee had said. The gear, however, was modeled closely after Schnee’s body. It didn’t stretch or shrink like other items, as it was created to fit a very specific shape.

Because of this, the bust, hips, arms and thighs were all Schnee’s exact size. Measuring the 『Shinobi Gear – Vanquisher of Evil』 would result in knowing Schnee’s three sizes and other detailed measurements.

Schnee felt embarrassed even if Shin wasn’t actually looking at her.

“It seems a bit late to worry about that though…no?”

They hadn’t registered with the authorities, but Shin and Schnee were husband and wife, as a matter of fact. They lived under one roof now so, as Luxuria had pointed out, their relationship was also physical.

“That’s not the same thing! What are you saying!?”

Shin staggered because of Schnee’s piercing gaze. He decided not to pursue the matter further and change the topic.

“Anyway, the 『Shinobi Gear – Vanquisher of Evil』 is alright too. Well, I should have expected it, since today’s battle was over quick and all.”

“It’d be great if the next battle went that smoothly too.”

“It would be ideal if we found a method not to let it inside the town.”

If it snuck inside in human form, not even Shin could do anything.

“We need to ask Hilamee first, but we could set some traps all around Luxuria.”

Avaritia’s target was Luxuria. Shin never expected that he would act to protect a devil, but he realized that this could happen in this world.

“They’d be anti-devil traps, after all. They would affect her too.”

The topic was a serious one, but Shin found it amusing as well.

The next day, Shin and Schnee headed towards the institute to meet with Hilamee.

Shin had this impression as they walked down the street lined with shops. He used the same path to go to Vulcan’s workshop, so he knew the street rather well.

Schnee often negotiated the price of groceries, with Shin carrying the heavier bags, so he frequently witnessed other clients arguing prices. The mood was usually brighter as that too was a form of communication. Today, however, things weren’t as peaceful.

Schnee approached one of the stores she usually visited, looked around a bit, then talked to the owner. Shin went close enough not to be in the way and gestured a greeting.

The owner seemed troubled, as Schnee listened to him with a serene expression. Thanks to that, she could obtain various pieces of information.

“The flow of supplies is slow, huh.”

Shin whispered to himself while looking at fruit sold at a higher price than usual. All stores were in the same situation, so the citizens’ wallets were in a pinch.

Most merchants’ carts had not arrived yet, despite the scheduled date having already passed.

Erkunt traded with various cities, so the cause could not be pinpointed to something that happened in one particular city. In other words, something had likely happened to the trade routes that connected Erkunt to its partners.

“The country is already investigating the cause. I heard they sent knights to check on some of the routes.”

“Crushing trade routes…it’s either Avaritia or its collaborators.”

Shin, Sherlene and the knights had neutralized only one cave. They didn’t know how many of those caves there were, but even one would be enough to cause serious damage.

It wouldn’t be possible to have powerful Chosen Ones guard all convoys. Even if they did, only warriors on par with Fagall or Sherlene could survive the encounter with Avaritia’s monsters.

“It’s way cheaper over there!! Why do you set prices so high!?”

Shin heard the quarrelling voices of a customer and shop owner from another shop. The two were arguing rather fiercely, so the passersby steered away from them.

It looked like a fight could break out any minute: Shin wasn’t a guard, so he thought that only in case they started fighting he would go to stop them.

Just then, a silhouette separated the two quarreling parties. It was a tall man, one head taller than the two, carrying a large sword on his back, which signaled how he couldn’t be just any young man.

The young man listened to the customer and the shop owner, a warm smile on his face.

“Prices are rising everywhere. You know that convoys are being attacked, right? The shop you’re talking about will have a hard time keeping prices down, you know?”

Like Schnee heard from the shop owner, Erkunt’s citizens already knew that trade convoys were not reaching the area lately. If the current situation continued, all stores would be forced to raise their prices.

“It’s not like the authorities are sitting there doing nothing. Besides, if you keep making a commotion you’ll have the guards on your neck soon. You don’t want to go that far, do you?”

At the mention of the guards, the customer’s expression stiffened. He hadn’t lost all reason yet, so he apologized to the shop owner and left.

Shin approached the young man, feeling a wave of nostalgia. The young man noticed him too and smiled, after a moment of surprise.

The young man who came running up to Shin and Schnee was Masakado, a former player who lost his life alongside Hilamee.

Shin gave him a casual greeting and Schnee nodded at him.

Shin replied with a sigh to the wide-eyed Masakado. He had brown hair and red eyes, just like he was in the game era. Though he was a Dragnil, he made his appearance completely Human-like, so the only traces of his actual species were a few sparse scales on his arms and legs. He did not have horns, so he looked completely Human.

Shin remembered that he was a level 211 Holy Knight, but now his level had increased to 231.

“Did you just return today?”

Masakado said that he had gone on a mission to exterminate a pack of Shadow Hounds which attacked trade convoys.

Shadow Hounds were wolf-like monsters which could conceal themselves in shadow, with levels ranging from 250 to 300. The pack was larger than normal, so exterminating it took some time.

“But just as I return, I get told that another convoy was attacked in another location! I was just talking with the others, things are really getting crazy.”

Masakado thought that the trade route was finally secure, but heard that another route had been squashed. He was going to report to Hilamee that something fishy was definitely going on.

“If you’re just making a report, couldn’t you use Mind Chat?”

“Yeah, well, you know, some things should be done in person…”

Shin perceived the meaning behind Masakado’s words and grinned. It was clear that Hilamee and Masakado enjoyed each other’s company, to say the least.

Shin remembered Masakado as a 15 year old boy: he had to be older now, but to Shin he didn’t seem much different.

“We were planning to go see Hilamee too, but I suppose we’d be in the way?”

“Not at all! If you’re going to see her, it must be about the devil, right? If Hilamee learns that I had you go home, she’ll never let me hear the end of it.”

“Well, come on, you know, her position is higher and all…”

Masakado replied with a fair reason, or at least tried to.

Shin didn’t know how they met: as far as he could remember, Hilamee had always kept the reckless Masakado in check with her staff, that’s the kind of relationship they had. He had heard that in the real world, Hilamee was older than Masakado. Even if she wasn’t however, the result would have probably been the same.

“Hmm, yes, let us ask in detail later. About you and Hilamee, first of all.”

Shin grinned even more, to Masakado’s dismay. His other comrades probably joked about it too. Schnee was silent throughout, but the smile on her lips hinted that she shared Shin’s thoughts.

When they arrived at the institute, they were let inside right away thanks to Masakado’s presence. The guard, who also was a Chosen One and instructor, was one of his comrades.

They went straight to the headmistress’ office. Masakado knocked and asked permission to enter, which was granted right away.

“The Shadow Hound exterminations has been completed. This is the proof.”

“Duly noted. I will take care of the documentation.”

The report, part of the headmistress’ duties, was carried out formally. Hilamee checked the material cards Masakado gave her and signed a document.

“Welcome back. I’m glad to see you safe.”

Hilamee showed a defenseless smile, very different from the one she showed to Shin or other teachers.

“Ah, yeah, thanks. It’s…this feels kind of embarrassing with other people present…” 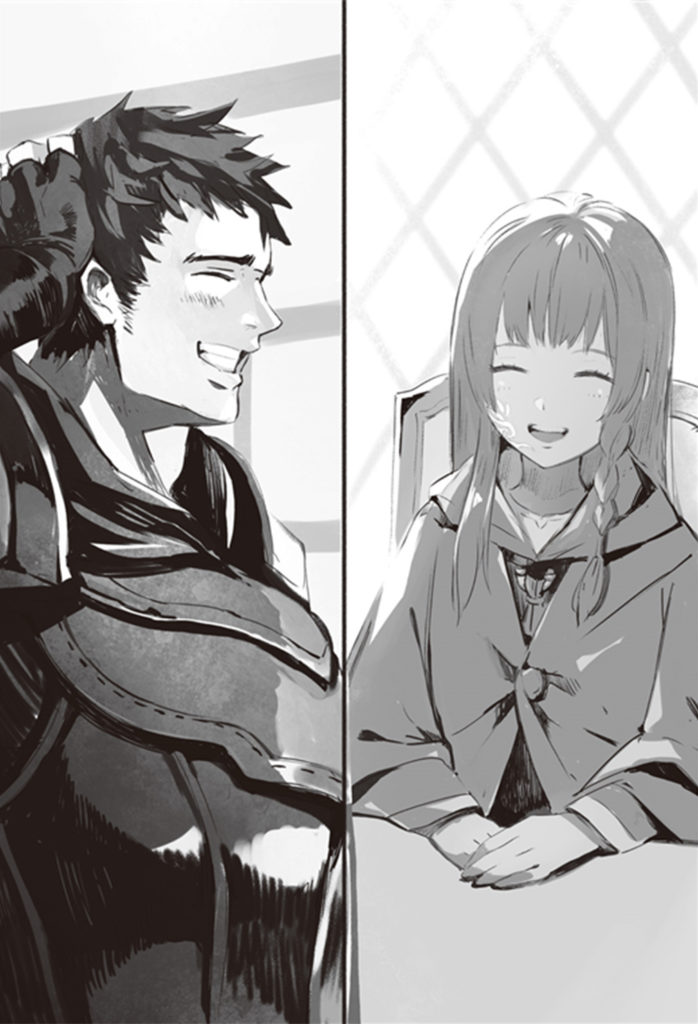 “I mean, there’s Shin and Schnee too…”

“What are you getting surprised about? They’re right behind…”

Masakado turned around, confused by Hilamee’s surprise, but Shin and Schnee were nowhere to be seen.

“You two are quite adorable.”

Shin and Schnee deactivated 【Hiding】 and showed themselves.

Hilamee, unable to grasp the situation, was at a loss for words. She knew that she had been seen with a very “unprofessional” face on though, so her face quickly became beet red.

“Looks like I was worried for nothing. I’ll go call Luxuria, so please continue.”

“I’ll accompany you too.”

Shin nodded satisfied, then slid out of the room, followed seamlessly by Schnee.

“Hilamee, calm down! Hey Shin, how could you leave us like that!?”

Shin heard the voices through the door and thought he might have gone a little bit overboard, maybe.