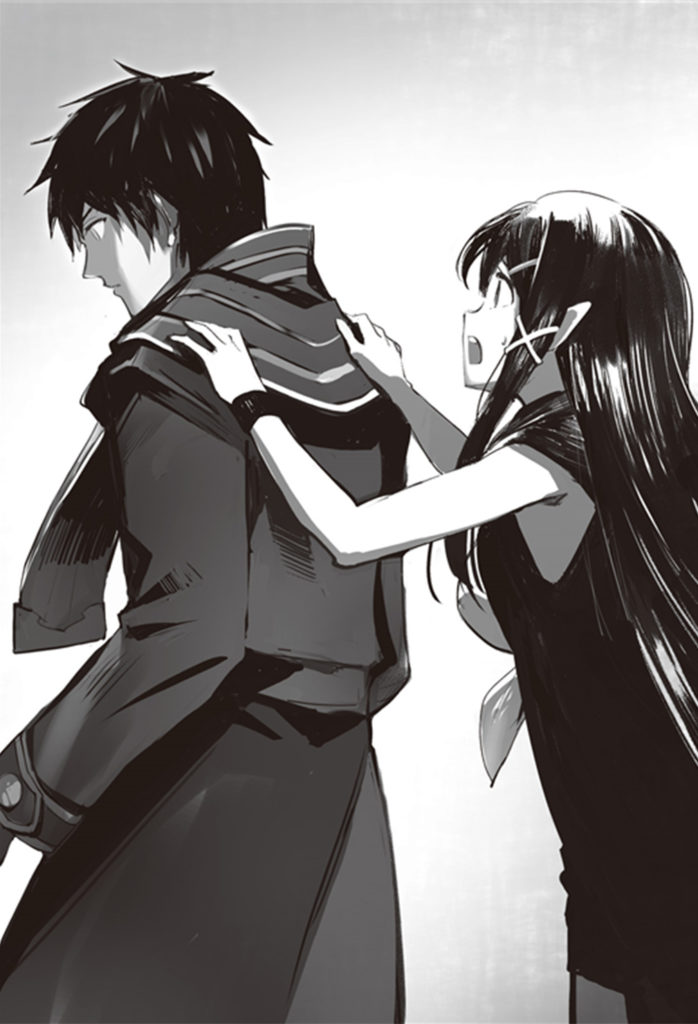 Shin’s conscience was brought back by force. He turned towards the warmth on his back and found Tiera.

“What’s gotten over you? You froze up all of a sudden…”

“Ah, nothing, just…the crystal’s response was strange, so I was thinking about it.”

Shin laughed, so Tiera would not worry.

What he saw, what he heard, what he felt. He couldn’t remember them clearly anymore, they disappeared from his memory like a dream after waking up.

Shin could still, however, feel some sort of pain lingering in his chest.

(When I touched this, something happened…I’m sure of it…)

The only thing he could remember is that something must have happened.

It was a frustrating feeling, but he thought it wasn’t the time to talk about it, as he turned the diary and crystal into item cards and placed them in his item box.

He then told the elves they would go and returned to Schnee and the others. They had already exchanged information, so they should be talking about future plans at this point.

“Did you find anything?”

“Yes, I didn’t analyze it yet, but we collected what was hidden.”

Orlean interjected in Shin and Schnee’s conversation. Because of the place they were in, he couldn’t keep silent.

“We’ll tell you anything we discover. Without doing the analysis first, however, I can’t tell what we are going to find out.”

It was the honest truth. The crystal they found was different from anything Shin had seen before. He felt it wouldn’t go like his usual blacksmithing work.

“I believe it’s better if we look at this together, though, so let’s do it once we finish talking.”

Shin took out the diary and everyone focused on it.

“Crissot’s diary. Tiera said there’s no mistake about it.”

Tiera nodded to Shin’s words too.

“Let’s read it together once we wrap up the conversation, then. We might learn about what actually happened.”

Shin put away the diary for the time being and the conversation resumed.

“I talked about the battle against Reforgerer and the state of the World Tree. Apparently there were little to no casualties and damage in the city.”

The battle had happened in an ideal place, in a way. The enemies had been led away from the city, so Shin was relieved to hear the results.

“Then it all depends on how the Forest King moves.”

“Yes. They will quickly find out that we couldn’t solve the situation ourselves. Even if the High Elf Lady Schnee was a key factor, there will surely be some kind of interference.”

The priestesses, very special individuals, and the warriors protecting them. As Lanapacea itself was founded to protect the World Tree, its caretakers and the government’s top brass were on equal standing.

Because of this commotion, however, such a balance would crumble. That was how grave their failure was.

Not even Orlean and Herald said they could predict how the country would act.

“A messenger will surely come in the next few days. I believe they will ask you to relate what happened again, Lady Schnee.”

Behind Orlean, who thought that Schnee was the leader, Herald was showing a very awkward expression.

Based on when Shin brought Rina to the residence or the way they talked, he might have noticed that Shin and Schnee were not simply allies.

“Then we should take a look at the diary Shin and Tiera found.”

Both parties shared all the information they had, so the only thing remaining was to look at the diary. Shin took out the diary and gave it to Tiera.

“There might be painful things written in it, but I believe you should read it first, Tiera.”

Tiera hesitated a little, but after hearing Shin’s words she decided to take the diary and opened it.

For a while, only the sound of flipping pages could be heard in the room. Everyone kept as quiet as possible, in order not to disturb her.

When Tiera reached a certain page, her expression contorted. A teardrop she couldn’t hold back ran down her cheek.

Tiera said so to Shin after reading the diary to the end.

He took the diary she gave back to him and opened it.

Unfortunately, it was written in elven characters, which Shin couldn’t read, so he had Schnee read it in his stead.

It was impossible for all present to read it at the same time, so Schnee read it aloud.

The diary entries’ dates had no semblance of regularity: Crissot probably wrote only when he felt the need to.

Maybe there were previous diaries too: the first entry mentioned Tiera.

A father’s feelings of pride for her increasingly growing abilities as priestess, the resolve to protect her. Short sentences expressing such emotions.

After that, the diary mentioned the wife’s delicious cooking, the soldiers’ training showing results, Crissot being conflicted about Tiera’s fiance.

Topics that any father, from anywhere in the world, could have written about.

Both as father and as a guardian, Crissot was probably a good person. Any reader would have reached the same conclusion.

Such peaceful topics, however, came to an abrupt end.

The following entry was written more than one month after the previous.

—What have we done to deserve this?

Everyone in the room realized what had to have happened in the period left blank.

Tiera had received the 【Cursed Gift】.

It was simply horrible after that. The period between entries grew longer and longer, the previously neat calligraphy grew rougher and rougher.

At that point, the diary lost much of its primary function.

Doubts concerning his priestess daughter and the curse she received.

Fear and anger towards the insults and humiliation reserved to the cursed, towards the horrible treatment his blameless daughter received.

Restlessness towards the increasing opinion that his daughter should be exiled.

Pain and sadness about not being to protect his daughter because of his position.

It was the scream Crissot couldn’t voice.

The letters were sometimes blurred, the pages wrinkled, showing clearly what Crissot must have felt at the time.

The last entry of the diary simply stated that his wife died.

Nothing else was written after that.

Shin and the others were silent for a while. The diary was short, its entries brief.

It was very heavy, however.

Especially in the latter half, it was like the words and letters themselves carried a curse.

“Mother did not die immediately after we separated. The people who were not in favor of my exile took her under their protection. But she was hurt where she was already mentally weak, so she did not live long after that, apparently.”

Tiera had learned this from former Lucent clan members. Shin thought that she surely did not want to talk about it.

“From the change in the entries, we can assume that Tiera receiving the 【Cursed Gift】 was the turning point. The timing seems too perfect, though. They were probably waiting for a chance since before.”

Shin agreed with his view too.

“Do you think it could be on purpose?”

“I am not positive it was, but considering what happened with Reforgerer, I believe there is a possibility. It would involve a witch doctor, an enchanter, and a necromancer though.”

The witch doctor was a job specialized in debuffs, casting curses and lowering the target’s stats. Enchanter and necromancer did not specialize in them, but were similar jobs as well.

The problem was that Shin was not knowledgeable about any of those jobs.

He knew that curses and necromancy skills were to be wary of as a target, but he did not know much about the jobs themselves.

As they had similar styles, the alchemist Hecate probably knew about the enchanter job, as the summoner Cashmere did about the necromancer job, but they were impossible to contact now.

“Then it’s this thing’s turn.”

The diary told them little. After making a few hypotheses, Shin took out the golden crystal from his breast pocket.

“It looks like one, but it’s probably something different. We found this in Crissot’s room with the diary. I am pretty knowledgeable about high-rank materials, but I have never seen nor heard about something like this.”

Shin predicted the crystal-looking item was the key to summon Reforgerer.

“It’s just bizarre. It was hidden by a demon, but I can’t feel any miasma coming from it.”

Tiera explained while looking at the crystal. She couldn’t feel any miasma from the crystal or the diary either.

“The room was trapped, but there was barely any miasma in it.”

“Did the clan head usually work in that room?”

“Yes, that’s correct. The residence is large, however, and the head had access to all rooms. He could have had countless options to hide things.”

Schnee followed Shin’s words with a question, which Orlean answered with a clouded expression.

Even if they tried narrowing down to the most suspicious places in the clan head’s range of movement, it would be difficult if he could have access to the entire residence.

Orlean said that he would order the residence’s workers to inspect the locations where the head was often seen.

“Could you let us analyze the crystal? I do not know anyone more knowledgeable about materials than Shin. In case of necessity, we can also travel the continent to consult other specialists.”

“….if Lady Schnee says so, then I’m sure even the king will have no objections. If you find out anything, please let us know.”

After a short hesitation, Orlean nodded.

Schnee’s ability was proven and she received requests from all over the continent, often from royal families and lords. She could surely obtain any necessary support easily.

Shin thought that Orlean probably reached such a conclusion before agreeing. Things wouldn’t have gone so smoothly if the proposal came from him, surely.

“We will return to the residence for the time being, then. If we stay too long we might end up encountering someone from the army.”

Schnee said this after they agreed on the methods of future communication.

They checked the map for any movements that could suggest the army was on the move, but it wasn’t an infallible tactic. Shin’s party also needed time to discuss what to do next.

“Understood. If something comes up we will contact you.”

Orlean saw the group off, bowing to Schnee as he did often during the conversation, and Shin’s party left the Luderia residence.

Orlean seemed to want to speak with Tiera, but he didn’t forget himself to the point of saying it in that kind of atmosphere.

“I wonder when they’ll let us go…”

An audience with the king was probably inevitable.

They did defeat Reforgerer, but the commotion was not over yet.

Half of the warriors of the caretaker clan of the Luderia had turned hostile, if only temporarily. Even if the demons were gone, they couldn’t work just like they did before.

Not only Orlean’s Luderia clan, but also the Lulac clan was likely to be punished.

Since Schnee was on their side, the king would not ask anything outrageous, but it was hard to think that they would be let go just like that.

“It all depends on how they move.”

“It would be nice if it was like an extermination quest, defeat the monster and you’re done…”

Shin knew that there was no point in saying it, but he couldn’t help himself.