One week had passed since Tendo’s party cleared the dungeon.

Before the two weeks time limit imposed by the king, all parties managed to clear it too.

The heroes thus spent their time between the training grounds and the dungeon they had cleared, to further improve their abilities.

Tendo’s party exhibited especially impressive growth: they were now capable of defeating the boss monster one on one.

Exactly two weeks from their last audience with the king, the heroes were once again assembled in the royal audience hall.

“You wished to speak to us, sire?”

As a representative of the heroes kneeling before the king, Tendo spoke first.

“Indeed. Let me first congratulate you for clearing the dungeon. I was relieved to learn that all of you succeeded in clearing it completely…the reason why I called you here today is that before you will defeat the demon king, I wish for you to embark on a journey.”

The king paused for a moment, then continued.

“You will depart tomorrow on a journey that will last three months. Each party is free to travel as they please. Three months from now, after your return, we plan to dispatch you to defeat the demon king…we have already informed the whole land that the heroes might visit. This hero proof will serve as identification.”

The king then ordered the royal guards to distribute pendants bearing the royal crest to the heroes.

In the meantime, Tendo inquired about something he had been curious about.

“I apologize for changing the topic. Could you let us know the location where Haruto was found unconscious?”

The question caused the king’s expression to turn sour for a brief moment.

“Hmm…apparently, he was found near the entrance to the forest between the royal capital and the town of Waxe…but why would you ask such a thing?”

“Thank you very much. Our party’s first destination will be the town of Waxe, then. Haruto might have been saved by someone, so we’re going to look for any clues.”

The king showed a conflicted expression but then spoke in a grave tone.

“…is that so. I pray you will be able to find what you seek.”

Tendo bowed and thanked the king. All heroes had received their pendants, so they left the hall.

The king, alone in the audience hall, called to apparently no one.

The next instant, a human silhouette appeared behind the throne.

“At your command, sire.”

“There is no doubt that he is dead, yes?”

“Yes. After the knights returned we inspected the location, but only found a puddle of blood. There were also tracks of a large monster, so we believe he was eaten without a trace.”

“I see. That is fine then…but send someone to monitor Tendo’s party, just in case.”

The silhouette then melted away in the shadows.

After leaving the audience hall, Tendo’s party gathered in his room.

“So we’ll go to this town of Waxe and look for Yuki, right?”

“Yes. If he was rescued, it’s highly likely he’s there.”

Tendo nodded to Mogami, then Ichinomiya asked him a question in a puzzled tone.

“…Koji, why are you so invested in looking for Haruto?” 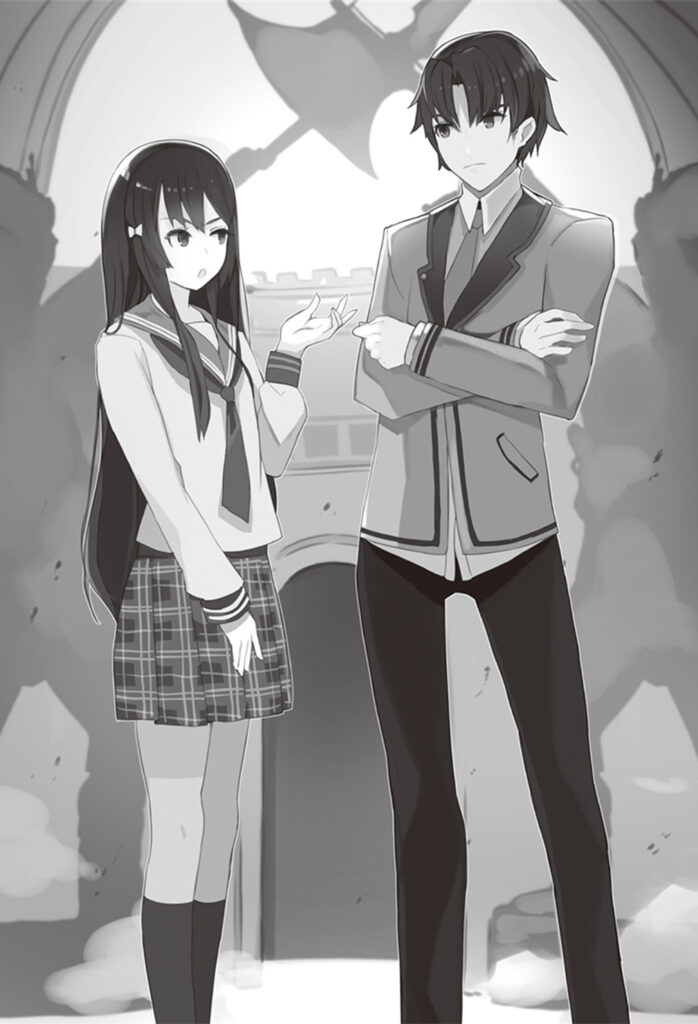 Shinonome, Asakura and Mogami all probably thought the same thing, as they looked at Tendo intently.

Tendo felt a bit awkward to be at the center of their attention, but answered clearly.

“Well, you see…first, let me start by saying that I think he’s alive. Then, even if we defeat the demon king, there’s no point if we can’t all go back together. So I wish to find out the truth…and Suzuno, you were really worried about him too, right?”

Tendo smiled at her, so Ichinomiya thought her feelings for Haruto had been found out and blushed violently.

Shinonome and Asakura looked at them smiling, but Mogami, still a beginner in such love matters, was thoroughly perplexed.

Two days after the audience with the king, the heroes were gathered at the royal castle gates.

“Everyone, thank you for everything. We will come back much stronger than now!”

On behalf of the heroes, Tendo thanked and greeted Glifas, Marvelle, the royal knights and court magicians who had overseen their training.

Each party was going to act on their own, so they promised to meet again three months later, then scattered in different directions.

Tendo’s party, as scheduled, headed towards the forest where Haruto collapsed.

One month had already passed since they had been summoned to this world, however: not only did they not find any clues, but they couldn’t even tell the exact spot where Haruto had been found.

“…I kind of expected this, but there isn’t any evidence, huh…”

“It’s been one month already, after all! Come on, let’s go to Waxe! We might find Yuki there, right?”

“Right! That dumb Yuki, making us worry like this…he’s got a lot to apologize for!”

Asakura tried to cheer up the gloomy Ichinomiya, then Mogami followed in a joking tone.

Ichinomiya felt a bit relieved thanks to their consideration.

— two hours passed since the party entered the forest…

Tendo suddenly spoke to the rest of the party.

“Did you hear that?”

The other four members listened closely to the surroundings, but could only hear silence.

“I can’t hear anything?”

“Yeah, Koji, isn’t it your imagination?”

“No, I’m sure I heard something from that way.”

Asakura and Mogami replied negatively, but Tendo wasn’t convinced and pointed in a certain direction.

The direction leading to Waxe.

Shinonome seemed to notice something and gasped.

The next moment, a faint voice reached the group’s ears.

As soon as they realized it was a call for help, Tendo and his party started running.

They left the main path cutting through the forest and finally reached the voice.

It was a rather large clearing: there they found two horse carriages on the left side.

There were all sorts of goods scattered about, as well as wounded people sitting on the ground.

On the right side of the clearing, two adventurers were fighting monsters, to protect the wounded and the carriages.

The monsters were four Greywulfs: they were trying to get closer to the carriages, but the two adventurers blocked their way.

The adventurers knew that if they chased the monsters, others from their pack would attack the convoy, so they were forced to take a defensive stance.

“Are you alright!? We will help you now!”

The two adventurers answered Tendo’s call without turning towards him.

“Please! They’re too many for us, we’re getting in a pinch!”

Tendo and the others nodded to each other. The front line members – Tendo, Mogami and Shinonome – approached the monsters, while Ichinomiya and Asakura went in the carriages’ direction, to tend to the wounded.

Thanks to the intervention of Tendo’s party they now had the advantage in numbers, so they could make short work of the Greywulfs.

“You really saved us, thank you.”

“Just the two of us couldn’t have defeated them all…we’re in our debt.”

The two adventurers thanked Tendo’s party, then a merchant-looking man and the other people next to the carriages approached them too.

“Thank you so much, you’re our saviors. We have lost some of our goods, but being alive matters the most.”

“We simply did what anyone else would have.”

Tendo’s words apparently caused the leader of the convoy to remember something.

“Those words…they’re the exact same thing the young man who saved my older brother said.”

The five heroes reacted with surprise.

“Oh, where are my manners. My name is Gassul, I am a merchant.”

After Gassul introduced himself the party did the same, then inquired about the “same words” he mentioned.

“Sir, what did you mean by “exact same words”? Who is that young man?”

“Oh, you see, some time ago my older brother was attacked by monsters in this same forest— ”

Gassul then told the party what he heard from his brother.

About one month ago, his older brother Bacchus was attacked by Greywulfs while he passed through the forest.

The adventurers escorting him were all killed and he was prepared to meet his end as well.

Just then, a young man appeared: not only did he defeat the monsters, but he also healed my brother, who was on the brink of death, and even restored his lost arm.

Then when my brother thanked him, the young man said that he just did what anyone else would have.

“Er, ehm…can you tell us that young man’s name and what he looks like…?”

“My brother said he was a young man with black hair, named Haruto…what about it?”

Gassul replied curiously, and the whole party froze in place.

Both name and features matched perfectly with the classmate they were looking for.

A wave of surprise, joy and doubt washed over them, so they didn’t know what to say for a little while. When they finally managed to get over it, Ichinomiya pressed Gassul for more information.

“Where is that young man now!?”

“According to my brother, the day after they were saved in the forest he left for the border town of Vaana, with that young man as escort. I think he added that the young man headed to the kingdom of Perdis after that…”

They couldn’t be sure that Gassul’s information was 100% correct,  but the possibility that Haruto was still alive was now higher, so Tendo’s party felt more hopeful.

Since the information about Haruto going to the Perdis kingdom via Vaana seemed reliable, they decided to pass through Waxe and leave for Vaana.

Haruto decided to leave the castle on his own after learning that he had not received any abilities, in order not to be a burden on the others.

Despite this, he had defeated the monsters in this forest and even healed a man’s lost limb.

The monsters dwelling in the forest were not especially strong for Tendo’s party, but they definitely weren’t weak either. Haruto wasn’t supposed to know recovery magic, let alone any magic either.

According to Gassul, the incident happened one month prior: thus immediately after Haruto left the castle.

Tendo’s party discussed the differences between Gassul’s information and what they knew, but the only conclusion they could reach is that they had to meet the “Haruto” Gassul talked about.

The same Gassul then asked them a question.

“By the way, you seem to be quite strong, but are you adventurers?”

Tendo and the others shook their heads and showed the pendants with the royal crest, proof of their hero status.

“Oh! Now that I think about it, I did hear that the heroes had appeared…so it was you! Oh my, oh my, I am traveling with heroes! What an honor!”

Gassul’s overt joy made Tendo and his party blush a little and scratch their cheeks.

Less than one hour later, the convoy reached the town of Waxe.

When it arrived before the entrance for merchants, a guard approached them.

“Your trader proof, please — oh, if it isn’t Mr. Gassul! Welcome back…who are the people with you?”

Following Gassul’s introduction, Tendo and the others showed their hero proof.

“M-my deepest apologies!! Yesterday we were noticed to let through the heroes that carried that proof, but I had never seen a real hero before…!! Please forgive me, go on through!!”

Laughing wryly at the gate guard who had met heroes for the first time, the group entered the town.

Gassul made preparations for a place to stay for the party, so Tendo and the others took a good rest to be ready to leave the next day.

The next morning they departed for the border town of Vaana, following the young man called “Haruto”, whom they believed to be their missing classmate.