His race has changed from human to Yvel.

Moreover, his skills have increased compared to before he became a Yvel, and the level of his original skills has also increased.

This is also a skill that he didn’t have before he became a Yvel.

But the first time he got hit by an inferno, he indeed suffered some damage…so perhaps it was newly acquired after enduring those flames.

That would explain why the blow earlier had suddenly become heavier. He must have upgraded his strong arm skill or acquired a new one.

I walked back to the hall, feeling bitter that I had let my guard down.

Heelis was so desperate to break the barrier that was protecting Finne and the others that he didn’t seem to notice me. Incidentally, the royals were unconscious inside the barrier.

“—Some nerve you got there ignoring me, huh?”

I said, and unleashed my intimidation on Heelis.

The intimidation seemed to have made Heelis realize that I was all right.

He turned his palm toward me with an angry expression and formed a huge magic circle that was probably two meters in diameter.

That’s not good. It’s got a ridiculous amount of magic power in it. If activated, it’ll be a very large scale magic spell. And if not careful, the damage could spread to the city.

If it’s the type of magic that releases some kind of material, I can probably contain it with Aegis, but if it’s the type with a special effect, then it could be tricky.

I should probably start by preventing the activation of the magic spell itself.

A chain of light appeared from the void and bound Heelis’ arms and body.

However, this only had the power to restrain.

So Heelis extended his arms again through the gaps in the restraints and attacked.

“Yeah, way ahead of you buddy—Air cutter!”

A blade of wind sliced through the countless arms that were approaching me.

And while at it, I approached the arm that’s deploying the magic circle with Ground Shrink and swung my beloved sword.

Apparently, he had used the Harden skill to increase his strength, but there was nothing that my black katana Benizakura could not cut, as it is a divine-grade weapon and also possesses the ability of absolute cleave.

I cut off Heelis’ arm along with the Holy Chain that I had deployed earlier.

I thought it would just turn into dust and disappear—but before it did, an arm grew out from around the wound, grabbed the severed arm and attached it back to the cut surface.

And then it was back to normal, as if the fact that it had been cut off had never happened.

Moreover, because the original arm was attached, the magic circle was still there.

Heelis twisted his body with all his might and pointed the magic circle at me—activating the magic.

I retreated with Ground Shrink and erected a barrier magic.

Then a hemispherical barrier was deployed around Heelis.

At the same time, the magic contained in the magic circle was activated and the barrier was filled with explosive flames. I knew it was a material release type magic spell, I’m glad the barrier could handle it.

But still, it’s a powerful magic, just as I expected. If it had been an ordinary barrier instead of Aegis, wouldn’t it have broken through?

The barrier is still swirling with dense magic and flames.

“Such a pain in the butt, why not do me a favor and just croak already……”

I hoped so, but reality, like always, is a bitch.

So now let’s face it, he’s kind of sturdy, has super regeneration and even fire attribute magic immunity skills.

And when the explosive flames in the barrier cleared up, there was Heelis, unharmed as expected.

While I sighed, Heelis was swinging his arms and casting spells in an attempt to get out of the barrier.

Then again, there was no way for me to attack as is.

I decided to release the barrier and go on the offensive.

With the barrier lifted, Heelis stretched out his arms and attacked, but I evaded all of them and slipped into his range.

I sliced off both of his arms and used ice magic to seal them so that he couldn’t regenerate any more.

With those words, cold air drifted from around me.

The moment the cold air made contact, Heelis’ entire body froze, and he became icebound.

This way, there is no room for arms to grow. I would be able to finish him off slowly.

Just as I thought that, the ice cracked with a snap and a crack.

Heelis then regenerated both of his arms and at the same time crushed the ice that was clinging to his entire body.

Heelis, with his momentum, swung his countless arms at me.

I avoided the arms and retreated, thinking about my next move.

What now? Normally, Heelis should have perished being icebound just like that~…

I knew it. That super regeneration is a nuisance. I can use recovery magic too, but being able to automatically recover at such a fast rate is just too convenient.

I formed a pistol shape with my left hand while avoiding the countless arms.

It’s the same magic bullet that I fired when he was in the black orb, but this time I’ve increased the speed and the number of rounds to make it look like a rifle. This will greatly increase both the power and penetration.

When the magic bullet I fired landed on Heelis’ head, it instantly exploded and disappeared into dust.

The super regeneration regenerated his head, as planned.

Even Heelis couldn’t see my movements with his head missing, creating a huge opening.

So I invoked a magic spell with a stronger visualization than before.

“Let’s bring this to a close—Holy Chain!”

The moment I muttered the name of the spell, Heelis’ arms and body were bound by chains of light that appeared from the void.

From what I’ve seen of Tendo and the others’ battles, Yvels are probably weak against holy magic.

I believe holy magic is supposed to “extinguish evil creatures”. So it must have some kind of power over a Yvel, which is a monster.

But I can’t use holy magic. Then I’ll have to think of something else…

That’s right. For now, how about infusing all my magic power into it?

My beloved sword, black katana Benizakura, is a divine weapon with the ability of absolute cleave and indestructibility.

If so, just putting magic power into it should be enough to give it considerable power.

I put my hand on the hilt of my sword, which was still in its sheath, and began pouring magic power into it.

Eventually, black katana Benizakura began to glow with a dazzling crimson light that could be seen even through the scabbard.

Heelis, perhaps sensing the danger, roared and tried to escape.

However, there was no way to break out of the bindings of the Holy Chain, which had become even stronger than before.

“You thought that you could best me with the power you obtained from a mere potion. That’s why you’re nothing but third-rate!”

I said coldly to Heelis, who could only struggle desperately.

“A pathetic prince who turned his own soldiers, and even himself, into monsters. Hell is just the place for you……Adios.”

I used Ground Shrink to dive into Heelis’ range, and dropped my hips deeply into a quick drawing stance.

Along with the name of the technique, I drew my sword and walked past Heelis.

As the crimson magic power sprinkled like a cherry blossom blizzard, countless lines appeared on the surface of Heelis’ body behind me. 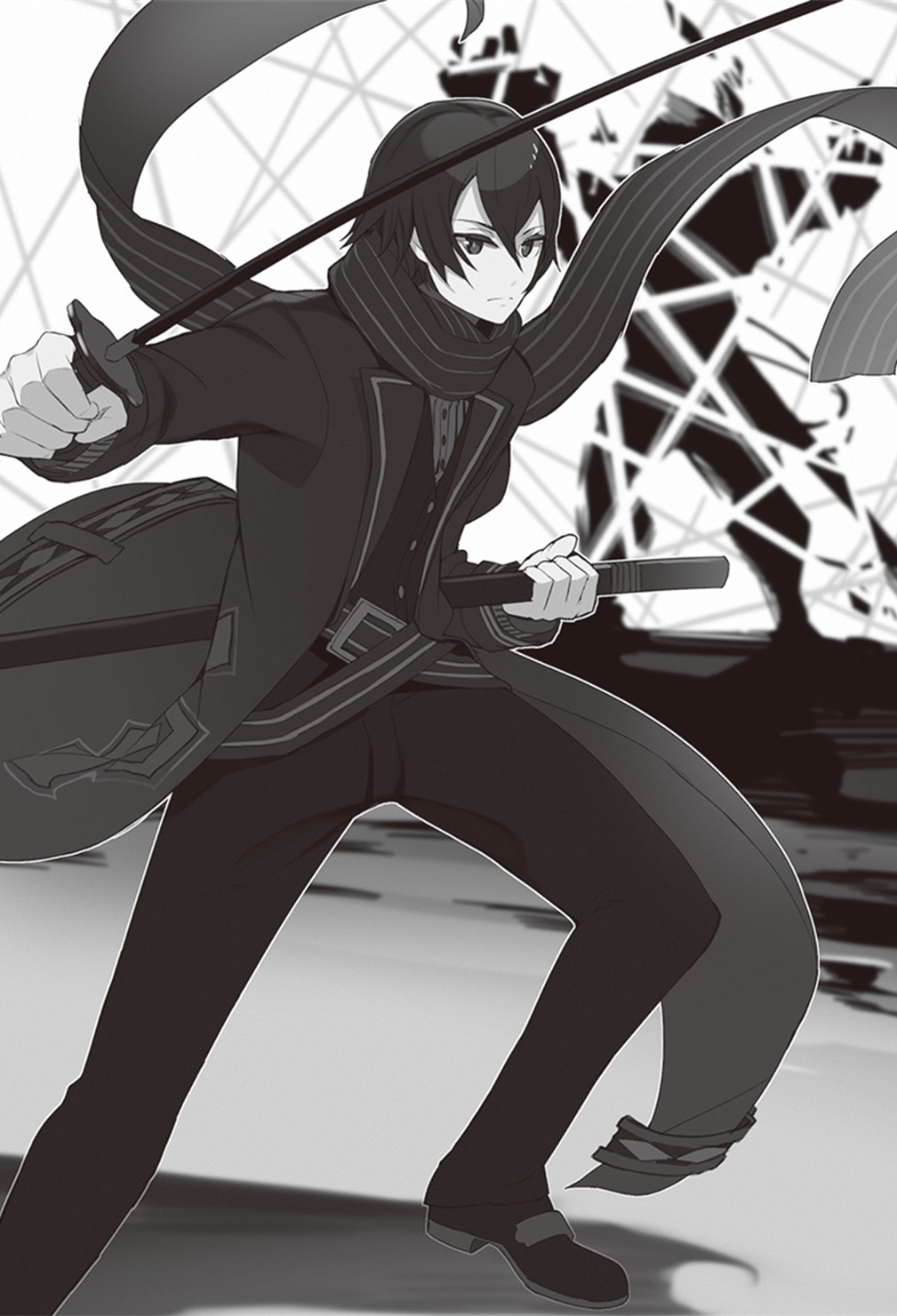 And as soon as I put my sword away following a clinging sound, Heelis crumbled to the floor in shreds, black blood spurting from the wounds all over his body.

The shredded lump of flesh that used to be Heelis disappeared into dust.

I was prepared to put up a barrier at any time in case he would come back, but it seems my fears were unfounded.

I lifted the barrier surrounding Finne and the others and took a breather.

And then, Finne comes running up to me.

“Haruto! Are you all right?”

As she patted her chest in relief, Tendo and the others followed behind her.

“That was one amazing regenerative ability huh”

Mogami muttered as he looked at the spot where Heelis had turned to dust.

I nodded in agreement and called out to Tendo.

“Thanks to Tendo, I got a clue on how to take him down.”

No, it wasn’t just Tendo. Suzuno, Mogami, Shinonome, and Asakura did as well.

Well, even though they had been transformed into monsters, it was the first time they had killed somebody. I suppose it is inevitable that they would become gloomy.

This is one thing that I cannot intervene in forcefully…each of them would have to handle it on their own.

“Don’t be discouraged. I’m not saying you should get used to it…but it’s better not to worry too much.”

“Oh, yes…yes, you’re right. Haruto, are you okay, like, psychologically?”

I’ve killed a lot of bandits, and I don’t think killing bad guys is going to bother me now.

…I do feel bad for the residents of the royal capital who got caught up in this incident as a result of the soldiers that turned into Yvels, though.

“—Oh right, Haruto! What about the city?”

It was Suzuno who was the first to recover and shouted out as if she just flipped a switch.

“Yeah! We have to hurry up and go save the elves and the people in the city!”

At Suzuno’s words, Tendo changed his mood and said so too.

But I shook my head.

“Hey hold your horses. Those are elves that I trained personally. No way they’re going to lose to some goddamn Yvels!”

Just then, I received a message from Aegan.

‘Boss. We’ve already taken out the Yvels out here.’

Who’s he calling boss, why is he not calling me master like he used to!? Nah, I guess now is not the time…

‘Yes, sir. We have a few injured, no fatalities…and I have one more thing to report. We met the heroes that the boss mentioned’

“All right. I’m glad you’re all okay. And the heroes, are they all right?”

‘Yes sir. There are a few injured among them as well, but some of them can use recovery magic, so they’re fine.’

After that, the second and third groups contacted me, and both were in similar situations, but no fatalities.

“It seems that all the elves are safe…and I heard that they encountered some heroes in the castle town.”

When I told them what I had heard from Aegan, they all looked relieved.

“That’s such a relief…still, some heroes? I wonder which…?”

Suzuno looked at me strangely, but I shook my head.

“Beats me. I’ll inform you the details later…now, all that’s left is—”

I said, and looked at the royals who had fainted before I knew it, probably from the intensity of the battle.