Chapter 14 – Past and Future

That evening, some of the knights led by Glifas and a group of court magicians, including Marvelle, the chief royal magician, returned to the royal castle.

Apparently, Glifas and Marvelle, the anti-royalists, had gathered only members of their own faction and had been holding joint exercises in the western city for several days. Which explains why there were so few knights and court magicians in the castle.

When Glifas and the others saw the devastation in the castle, they quickly raised their weapons, but when Kusel and the Prime Minister explained the situation, they were immediately convinced and promised to help rebuild the country.

I took Finne and the rest to the room where my classmates were gathered.

The room was filled with Tendo and the others, Ms. Usami and the rest of my classmates.

As soon as I entered the room, I was bombarded with lots of questions at a tremendous pace.

Well, I only gave a half-hearted explanation earlier, I guess.

“—Everyone, please calm down. I’m going to explain exactly what happened in detail.”

I prefaced my story by telling everyone about how Mariana had kicked me out, how I had almost been killed in the woods, how god had given me skills, and how I had become an adventurer and risen to EX rank.

Everyone was shocked to find out that Mariana had tricked them, but then Ms. Usami had an epiphany.

“Yuki, if the person who gave you that skill is really a god, wouldn’t he know how to return to our original world!?”

The teacher’s words made my classmates buzz and they looked at me expectantly.

Some of them may have adjusted to this world completely, but somewhere in their hearts, they still want to go back to their own world—to Japan.

“I haven’t seen God since then, so it’s hard to say…besides, according to him, some have had success returning, but he’s not informed of their methods. Something about hero summoning being forbidden, so even a god can’t interfere.”

Ms. Usami and my classmates were visibly depressed.

“That’s right, what about the king who summoned us, maybe he knows something!?”

Everyone was staring at me, so I nodded.

“…I kinda killed him”

They all snapped at me with retorts from all angles.

“Calm down guys, if we check the room where we were summoned from, or ask the court magicians, or even the archives, they should be able to provide some kind of information.”

“That may be true, but…can we really go back?”

“Switch that ‘Can we really go back?’ mindset to, ‘We definitely going back!’, okay. Even god didn’t deny the possibility of us returning, and there are precedents, too. Right now I don’t know how, but I’ll find out for sure.”

They all nodded when I said that with confidence.

There were several voices initially, and eventually, it became a cheer.

Almost everyone’s faces were full of motivation and hope, a complete change from the gloomy expressions they had been wearing earlier.

In the midst of this excitement, Asakura clapped her hands as if remembering.

“That’s right, Yuki! Why don’t you introduce Finne and the others to everyone?”

Oh, right. That’s why I brought them here.

When I was explaining what happened to me earlier, I mentioned their names, but I didn’t introduce them properly.

Perhaps it was because I was in the conference room yesterday, but my classmates seemed to be paying attention to them with great interest.

“Right. Allow me to introduce them. These are my companions”

I said, indicating Finne with my palm.

Finne opened her mouth, nervous from all the attention.

“My name is Finne. I met Haruto in Vaana, a town on the border between the Kingdom of Glicente and the Kingdom of Perdis. He helped me when I was tangled up with adventurers, and we’ve been working together ever since. Now—I’m Haruto’s fiancée!”

Everyone except for Tendo and the others froze for a moment at Finne’s statement. And then—

They all shouted in surprise.

What’s so surprising about that? …Okay, it’s a little surprising.

But before the surprise could fade, Iris dropped another bomb.

“It’s nice to meet you. I am Iris Arclaidh Perdis, the first princess of the Kingdom of Perdis. And like Finne, I am also Haruto’s fiancée!” 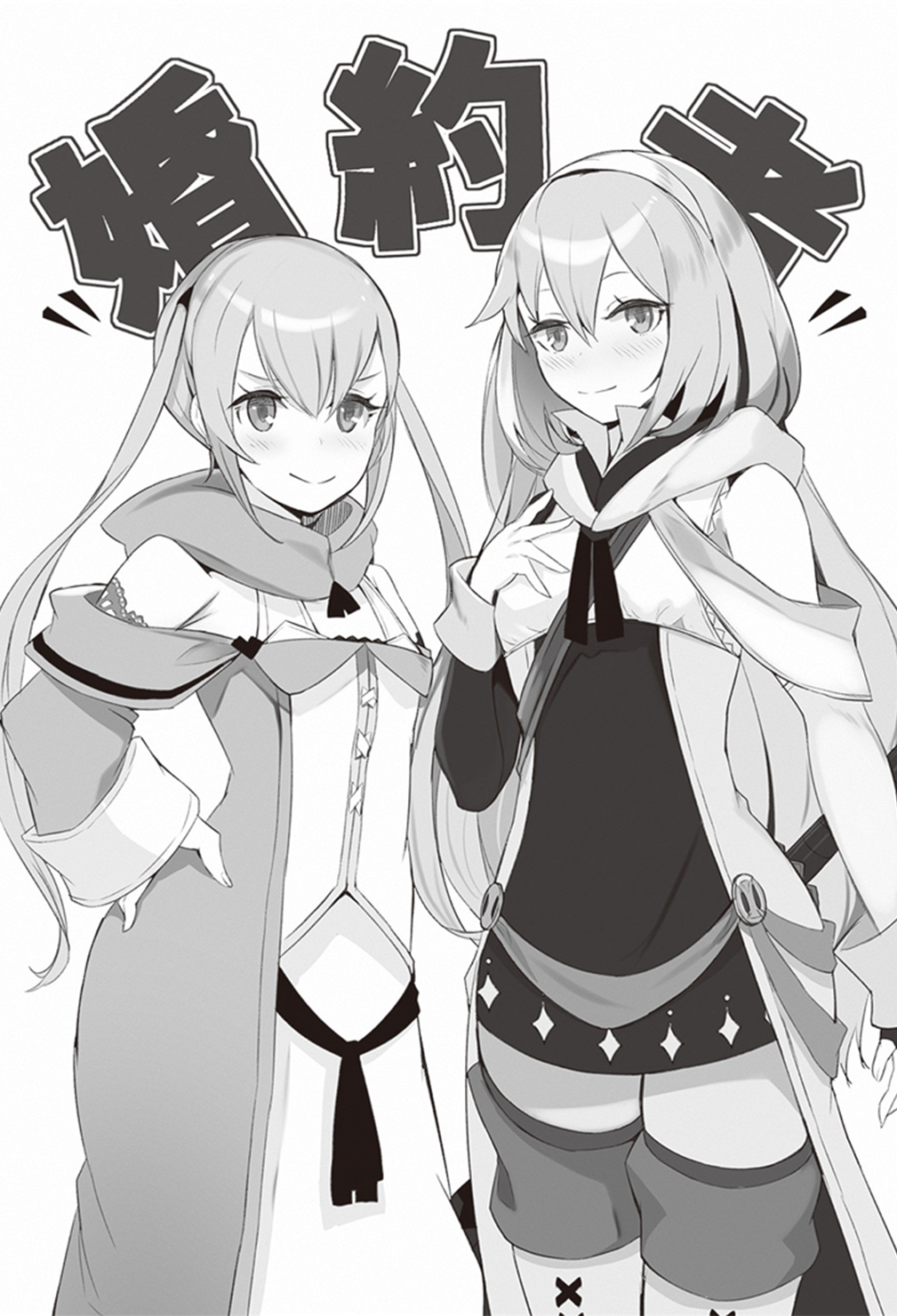 The classmates again speak in unison. You guys are so in sync, aren’t ya.

And then Orihara asked timidly.

“So, by first princess, you mean Iris, I mean Lady Iris’ father is…”

“He’s the king of the Kingdom of Perdis. You’re Haruto’s classmate, right? Then, you don’t need to use honorifics or ‘Lady’ when addressing me.”

“I understand, I mean, sure. So, is your betrothal officially recognized by His Majesty the King?”

When Iris answered with her chest out, I was given a number of dirty looks.

“Hey Yuki, be honest and out with it. Do so, and we’ll let you off half dead.”

No, no, no, you guys are looking eager to kill!

Some of the boys were pulling out their weapons!

I said, looking for help, but…

“Well, not yet. Even though I’m totally fine with it anytime…”

Whoa, somehow I’m getting even more intense looks than the ones earlier though!?

I had already resigned myself to getting lynched, but…

“The king already gave his blessing too…”

They each put down their weapons.

“Still, I can’t believe you have two fiancées…”

The boys still seemed to be mumbling something, but I pretended not to hear them.

Phew, I guess that takes care of that for now. Next, let me introduce Ephyr.

Just when I thought that—

Suzuno came out and said that.

Wait, what, that’s news to me though!?

“I-Ichinomiya, are you being serious?”

“Suzuno, you finally confessed your feelings to him!”

“Yes! I told him when we finally met again!”

Suzuno’s answer was met with high-pitched cheers from the girls.

“So we decided to stay together…I talked to Finne and Iris about it, and they said they didn’t mind if it was me.”

Oh no, that’s for me to decide, not Finne and the others, isn’t it…?

So I was lost in thought, but one of the girls who heard Suzuno’s story came up to me.

“How do you feel about Suzuno, Yuki?”

I couldn’t think of anything to say.

I don’t dislike Suzuno. I’ve been with her ever since we met again, and I’ve enjoyed our time together…I’m not sure how to react to this, as I never thought I’d suddenly be declared her fiancé.

She must have taken my reaction the wrong way, as Suzuno gave me a sad look.

Suzuno stared at me.

“I don’t dislike you, Suzuno. In fact, I’d be lying if I said I didn’t have romantic feelings for you.”

When I answered, Suzuno’s face turned red and she hugged me.

The girls around me cheered.

After a while, Suzuno stopped crying and was surrounded by everyone congratulating her.

As I watched the group, Asakura and Shinonome came close to me.

“I leave Suzuno in your care”

I sighed and asked them.

“What do you guys take me for?”

I shook my head at Asakura’s answer.

“I am—the strongest adventurer in the world. I will always keep Suzuno safe.”

At these words, the girls surrounding Suzuno shouted for the third time.

I heard one of them say “Awwww, I would like to be told that, too”.

By the way, Suzuno’s face was the reddest I’ve ever seen and she turned her head down.

…Wait, if you’re that embarrassed, you’re going to make me start blushing, too.

As if to disguise my embarrassment, I moved on to introduce Ephyr.

I pulled Ephyr’s hand and brought her in front of me.

“Well, uh, my name is Ephyr. I am an elf. As you may already know from this morning, I was sold into slavery after my village was attacked, but Master Haruto saved me…and I also wish to marry Master Haruto!”

I couldn’t help but raise my voice, but my classmates were no longer surprised.

I was the only one who was surprised.

I asked Finne with trepidation.

I’m afraid she’s going to be angry that I’m adding too many people, not just Suzuno but now Ephyr.

“Me? Oh, I knew that Ephyr had feelings for Haruto, and Iris and I had talked about the possibility of it turning out this way though?”

I looked at Iris.

“Yes, it’s true! Of course I’m not against Ephyr either. So now, that makes four of us, wow, way to go Haruto!”

I was at a loss for words.

I had no idea this was going to happen.

And the boys were giving out a stronger killing intent than before.

Some of them were still holding their weapons, but none of them looked like they were going to jump me. They probably understood that they were no match for me from the intimidation I had unleashed on them at the meeting this morning.

Leaving my classmates to their own devices, Ephyr came up to me.

Then she looked up at me with moist eyes.

“Yeah, let’s get along better”

I ignored the jealousy-filled murmurs from the boys and the “real-life harem…” mutterings from the girls.

Ms. Usami was looking bewildered as if she couldn’t keep up with the developments, but after a while she finally seemed to grasp the situation and her face turned red.

And then I was suddenly curious, so I asked.

“…Speaking of which, why were you all in the royal capital? I heard that you guys left at the same time as Tendo and the others.”

“Yes, that’s true. It’s still too early from the three months directed by the king, so what’s up?”

When Tendo, who seemed to have the same question as me, asked, Orihara answered.

Apparently, a month after the heroes left the royal capital, the king informed them that the deadline for their journey would be changed to two months.

So yesterday, exactly the two months deadline, all of my classmates except for me and Tendo and the others, including Ms. Usami, all gathered in the royal capital…was pretty much the gist of it.

“What? I didn’t receive any such notification though?”

“I knew it. The messenger asked me if I had any idea as to your whereabouts, but…”

Looking at Tendo and Orihara pondering, Suzuno raised her voice.

“Oh, I suppose we were already in the elven village a month after we left the capital, right?”

Hearing that, Asakura counted on his fingers.

“…Oh, you’re actually right! Well, that explains why you couldn’t find us, I mean, who would think to look for us in the elven village right.”

Mogami and Shinonome nodded their heads in agreement. Seeing this, Orihara continued to talk.

So that’s what happened… and we were resting at the inn and that’s when all hell breaks loose, right? We went out to help the people, and when we were struggling, the elves saved us…I guess that’s about it.”

“I see. You guys are really brave heroes to have moved so quickly to help the citizens.”

When I said this with admiration, Orihara and the others smiled embarrassedly.

That day, we talked about what had happened in this other world until we dispersed.