—The day Haruto and his group departed from the royal capital, a little back in time.

Tendo, Ichinomiya, Mogami, Asakura, and Shinonome were on the 19th floor, the middle floor of the dungeon.

According to prior information, the dungeon was expected to have a total of thirty floors. Halfway through the dungeon, from the 15th floor, the monsters became stronger, making it difficult for even the best adventurers to advance.

However, the heroes had successfully reached that point, despite their struggles.

And among them, Tendo’s party was at the forefront of the raid.

Two level 60 monsters were defeated by the attacks of the three vanguards, Tendo, Mogami, and Shinonome.

Their raid speed was unbelievable.

“Do you think there are any stairs leading down?”

“I haven’t found it yet. We’ve been lucky so far, so we’ll just have to search slowly…”

“Was I found out? Actually, I like this kind of thing because it’s fun, like a game.”

Asakura, who doesn’t hesitate to call herself an otaku, said with a laugh, and Tendo called for attention.

“Natsuki. Quite a number of adventurers have died in this labyrinth. So we need to keep our heads up as well.”

“Sheesh, I know that much!”

Asakura puffed out her cheeks like a child and stuck out her tongue, causing the group to laugh at her.

The atmosphere was cheerful, but they did not let their guard down.

The group’s current level was approximately 70. Which was quite high for a human considering that Kusel’s level was 64 when Haruto first met her.

In addition, all four of them, except for Tendo who has the holy sword Mistilteinn, had been given weapons by Haruto that he claimed are prototypes.

The weapons are not prototypes at all, but were first-class products that would make the craftsmen of this world swoon.

The level of the enemies in this floor was 60.

The dungeon had a mid-level boss every five floors, and a powerful monster as boss monster every ten floors.

The boss battle on the next floor would be even stronger than the previous one.

All five of them knew this, and so they kept their vigilance and tension intact.

Then, after searching for the stairs for a while, Asakura finally spoke up.

As Tendo and the others gathered, they found a hole hidden in the shadows and a staircase leading to the bottom.

“Found it at last…geez, how I wish it wouldn’t be so hard to find.”

Tendo said disgustedly, and everyone nodded, including Ichinomiya.

The party descended the stairs and sat down in front of the boss room.

“Let’s take a break to prepare for the boss battle. What do you think guys?”

No one objected to Tendo’s suggestion.

This floor only had the boss room, with no other monster in sight.

Since this was not the case in the other floors, the party took turns resting, but their fatigue had reached its peak.

After setting up their tents, eating, and cleaning themselves up, Tendo and the others took their time to rest for the first time in a long time. When they woke up, they began their strategy meeting.

Nodding at their reply, Tendo continued to explain the strategy.

As usual, Mogami and Shinonome would draw the enemy’s attention with their close-quarters attacks, while Ichinomiya and Asakura in the rear guard would take charge of recovery and guerilla attacks. The idea is to take advantage of the gaps in the enemy’s defense, to allow Tendo to release his powerful attacks.

“Like I said earlier, we never know what’s around the corner. So be sure to keep your guards up.”

With that voice, Tendo and the others stepped into the boss monster’s room.

In the boss’ room was a Minotaur that the party had defeated in the mid-level boss battle back on the fifth floor.

“A Minotaur, here of all places?”

“There’s something different about it. It’s bluish-purple in color, and it’s…”

“Yeah, that weapon isn’t just some random axe, it’s some kind of magic sword. Moreover, even my appraisal couldn’t identify it and only displays as unknown. There’s something disturbing about it, and you can bet that it’s much, much stronger.”

At Tendo’s words, Mogami and the others, all four of them became visibly nervous.

At the same time as the Minotaur looked at Tendo and his party, the door slammed shut behind them with great force.

The minotaur let out a roar.

It was an intimidating roar that would make any normal person freeze up while pissing their pants.

However, contrary to the Minotaur’s expectations, Tendo and the others were calm.

“Well, Haruto is amazing in many ways like that…”

Mogami, Asakura and Shinonome nodded as Tendo and Ichinomiya chuckled saying that.

However, all five of them were not letting their guards down.

Even though they were not as good as Haruto, they could tell that the Minotaur was a powerful enemy.

It was also in a different league compared to the monsters they’ve faced in the past.

Tendo was almost frightened for a moment, but then he reminded himself that he would not be able to move forward without defeating it.

At Tendo’s words, the four of them nodded, their expressions tightening.

At the same time, the Minotaur thrust out its horns and charged forward.

It closed the distance in an instant, but even so, Tendo and the others were able to evade it without danger and prepared to attack.

However, the Minotaur braked and swung the battle axe in its hand at Mogami, who was about to attack it.

The Minotaur hurriedly distanced itself as Asakura’s magic hit it in the face, while Mogami braced himself for a direct hit.

“Wow, not even a scratch! This Mr. Mino has such a strong defense!”

“You know, saying Minotaur is kinda of a drag and long.”

While listening to the exchange between the dissatisfied Asakura and Ichinomiya, who seemed like she had something to say, the vanguards, Tendo, Mogami, and Shinonome, readied their weapons.

Asakura applied a support spell that increased attack power and speed to the three of them.

The three of them thanked Asakura and headed towards the Minotaur.

The Minotaur responded by swinging its battle axe, but it could not handle the simultaneous attacks of the three of them, and its body was gradually scarred.

And then, when its strength had been reduced considerably, the atmosphere suddenly changed.

Tendo and the others took their distance at once and prepared themselves.

They watched intently, trying not to miss the Minotaur’s every move—and then it made its move.

The Minotaur slammed its battle-axe into the ground with all its might, and the debris and stones that flew off the floor were flung away by the battle-axe.

“Everyone, get behind me!”

The four of them moved behind her as quickly as Ichinomiya instructed.

The Sacred Barrier is a light magic that creates a hemispherical defensive barrier with a radius of two meters.

At the same time as its deployment, multiple fragments hit the barrier. 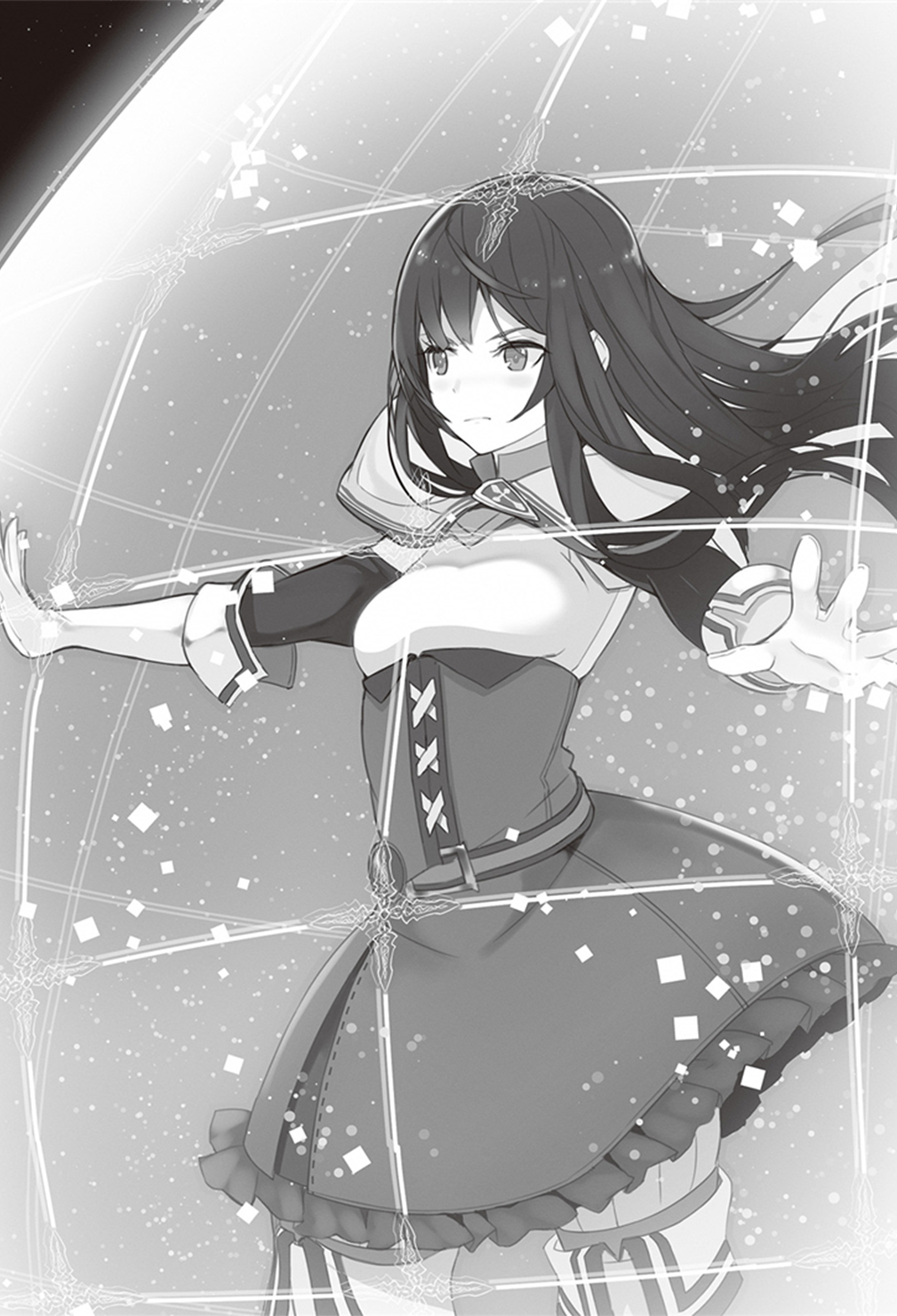 The barrier repelled the incoming attacks, and just as Ichinomiya was about to breathe a sigh of relief—a crack appeared in the barrier.

Tendo and the others all shouted in surprise.