The next morning, Shin woke up before Yuzuha, despite going to bed later than her, washed his face and headed to the living room.

Schnee and Tiera were already up and had almost finished preparing breakfast.

Schnee greeted Shin with a blank expression on her face, as if nothing had happened the day before. Shin tried to reply as natural as he could.

Because of her lack of expression, it looked like Schnee was putting pressure on Shin which put him at a loss about what to say.

Tiera looked, puzzled, at the two people staring silently at each other.

About the time when all members woke up and had finished eating breakfast, Shin received a message from Vizzy, stating that she had arrived close to their position.

After a word to Schnee and Tiera, who were washing the dishes, Shin, Filma, and Shibaid went outside. The map showed Vizzy’s marker, so Shin temporarily removed Celciutos’ cloaking function.

Vizzy seemed to have spotted Celciutos, as her marker went from moving in circles to speeding straight in Shin’s direction. Less than 5 minutes later, Vizzy and the Elder Dragons arrived before Tsuki no Hokora. Just like the previous time, Vizzy had brought 5 Elder Dragons of different colors.

“Hello there~~looks like you’re in quite the pickle, aren’t you~~”

Shin replied with a wry laugh to Vizzy’s unchanged “mellow” way of talking.

“But thank you for coming so quickly.”

Rashugum was heading towards Shin’s location. Even though the wind was not in their favor, it would still reach them by evening.

Shin’s party had nothing else to do at Celciutos, so they decided to go to Rashugum. After changing Tsuki no Hokora back to pendant form, they all boarded the Elder Dragons.

Shin, Filma, and Shibaid mounted an Elder Dragon each, while Schnee and Tiera got on the same one. Learning from her past experience, Tiera wore a coat for protection against the cold.

The Elder Dragons, obeying Vizzy’s command, flapped their large wings. After a short approach, they all flew up in the sky.

Celciutos’ cloaking had been restored right after Vizzy arrived. If someone had been looking in the ship’s direction, they would have seen Shin’s group appear from nothing.

The howling winds would normally make it impossible to talk, but thanks to a combination of wind magic and 【Silent Domain】, Shin’s party could converse normally.

The inability to talk had been an inconvenience when they flew from Bayreuth to Sigurd, so Shin had come up with this method after testing several skill combinations.

They passed plains, mountains, and forest areas, encountering flying monsters on their way. Most of them avoided the group, fearing the Elder Dragons, but some monsters attacked in packs…only to be blown away by Shin. He didn’t care about defeating them, so he just created a path with wind magic and flew straight through it.

Shin had attached spells to the Elder Dragons: they wouldn’t be affected even if the monsters tried to tackle them. The wind spell caused some monsters to crash down to the ground, but Shin’s group was in a hurry and did not bother with recovering the items they dropped.

During the journey the group landed once to have lunch, but started flying again right away: no detours. They focused on speed more than anything else, so they managed to arrive at Rashugum by sunset.

Tiera whispered her thoughts while looking up at Rashugum, bewildered. 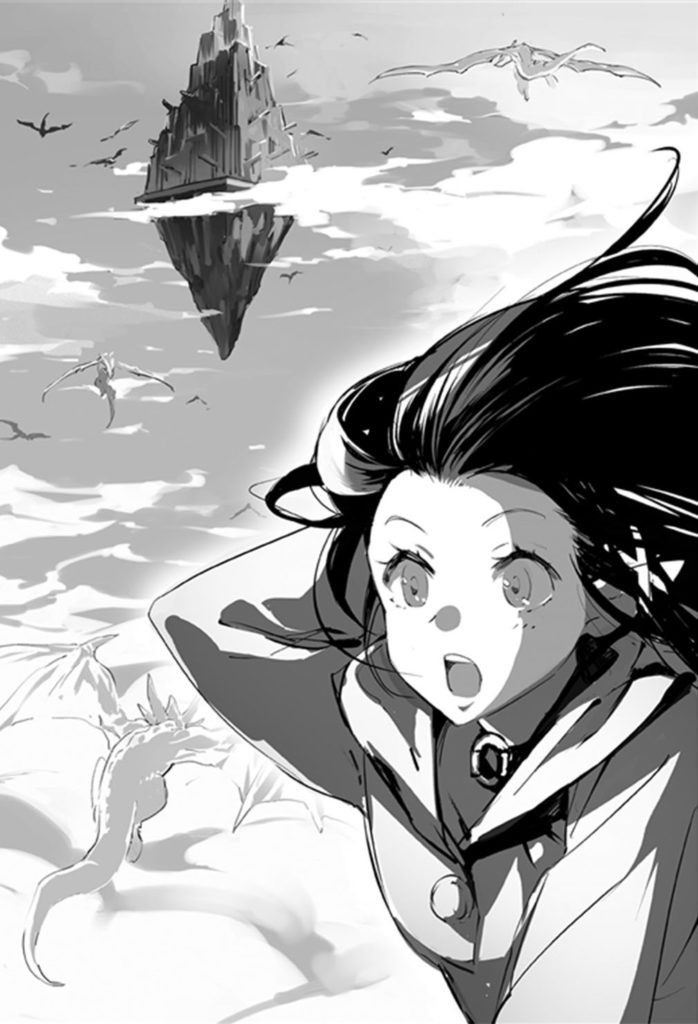 She had heard about it before, but actually witnessing such a bizarre sight brought a completely different sense of wonder. Yes, not intimidating, but bizarre.

Shin was used to seeing it by now, but when it was first completed he too rejoiced like a little kid.

Rashugum floated in midair as if a castle, along with its surrounding terrain, had been scooped up from a vase and placed there. The castle at the center stood tall and imposing like a skyscraper.

Around the castle, other than a series of cannons, there were also many protruding and floating objects, with unknown purpose at first glance.

Originally, the terrain under the castle formed the shape of an upside-down mountain. It looked like it could crumble with even the smallest shock, but it was actually duly coated with Chimeradite.

It was also equipped with weaponry that able to rain down attacks from above. Nicknamed the “floating fortress”, the 6th Sky Castle Rashugum was a super-weapon impossible in reality.

“Hey, isn’t it a bit too noisy here? And…there’s a huge pack of dragons there…”

Tiera pointed in the direction of a group of dozens of dragons, fighting with breath attacks and magic. It looked like there were at least two opposing parties at odds.

Some dragons flew undeterred by Rashugum’s protective barrier, while others were kept outside of it.

The former group, which could pass through the barrier and, despite having inferior numbers, was made of larger dragons and seemed to be at an advantage, was composed of Elder Dragons.

The latter group, which could not penetrate the barrier and saw its numbers gradually dwindle because of the Elder Dragons, was made of creatures called Wyverns, types of dragons which had their front paws and wings fused together.

“Looks like they’re not in danger, but should we help just in case?”

“No need to~~it’ll all be over soon anyway~~let’s land behind the castle so we don’t get caught in the fighting, okay~~”

According to Vizzy, from time to time packs of flying monsters came attacking Rashugum, hoping to make it into their territory.

Wild monsters couldn’t enter Rashugum: a castle brimming with magic and protected by a sturdy barrier, seemed to be very appealing in the eyes of monsters, especially dragons; thus they often showed up to take a stab at its defenses.

“They have no chance, do they.”

“Exactly~~besides, we don’t have only Elder Dragons on our side~~”

Even discounting the barrier, it would be suicide for monsters to attack a nest of high-leveled Elder Dragons. Just now, the combined breath of 3 Wyverns had been annihilated by the breath of a single Elder Dragon.

The Wyverns were around level 400-500, while the Elder Dragons were 600-700. If there were unique specimens like Kagerou, they could be even higher.

Normally, if the attackers did not come in much larger numbers, they would not stand a chance. Vizzy’s words suggested that there were even more powerful monsters in Rashugum too. Shin began to feel a bit sympathetic towards the Wyverns.

Tiera, who had continued look at the dragons’ battle, spoke with a mixture of surprise and disbelief. She witnessed a golden beam, shot from Rashugum itself, obliterate the Wyverns.

“There’s an Ancient Dragon too…?”

A golden breath could only be unleashed by Ancient-type or superior dragons.

Ancient Dragons were “at least” level 800.

For the Wyverns, it was a fatal difference.

“It’s even more dangerous than last time we came here.”

So Shin said to himself as they passed the barrier and landed in Rashugum.