After training, Shin and Schnee headed out of the institute grounds.

“Those kids sure have gotten better.”

Shin could still hear their pained voices after the training ended. When they first started they didn’t even have the strength to talk, however, so they had clearly made progress.

They hadn’t trained against monsters, but they had become able to win against normal opponents without injuring them.

Lecus and the others didn’t know their own stats in detail, but they could make close estimates based on their speed and power. Based on this, Shin had advised them on how to use 【Limiter】 to adjust their stats.

“We don’t know when we can go to the dungeon again, so we might as well go out.”

“Some students hunt monsters as adventurers too, so I think it’s a good idea.”

They had already looked up what kind of monsters appeared around Erkunt. One concern was the fact that recently, monsters unlike the usual ones were appearing, as Shin had heard from various sources.

Vaal from the smithy had also said that the monsters’ territory seemed to have changed, causing equipment creation and repair orders to increase exponentially.

There were risks, but risks existed everywhere. Training dungeons without the risk of dying were more abnormal in that sense.

Shin was thinking that, in case of emergencies, he and Schnee were there to help, when he spotted a familiar face, who had already noticed Shin and Schnee and was walking closer, waving at them.

“I thought you might be around, because of your presence, turns out it was true.”

Luxuria, one of the Deadly Sin devils, approached Shin. She smiled, her long black hair fluttering in the wind. The eyes behind her sharply-designed black glasses housed a suspicious glint.

“What a coincidence, meeting you here. Perfect for me though.”

What could be perfect for a devil? Shin started having a bad feeling about the situation.

“Oh, don’t be so wary, please. I just meant that I was looking for you, so the timing is just perfect.”

“Do you need something from us?”

“Yes, I do. Would you mind coming with me? It’s not something to talk about standing around here.”

Since she was a devil, Shin couldn’t help but keep his guard up, though she did say she wasn’t hostile. Thinking it bad to be too suspicious, Shin decided to follow her for the moment.

“They serve light meals here too. Besides, alcohol is only served at night.”

Luxuria led them to a bar with a rather nice atmosphere. He didn’t know if she chose it on purpose, but the inside of the store couldn’t be seen from outside. Depending on how one looked at it, it might also look like an elegant tea shop. The bartender seemed to know Luxuria already as the group was led to a private room.

“Let me continue, then. I was looking for you two because I have something of a request.”

“Yes. Just after you were teleported into the dungeon, Greed…now they use the name Avaritia. A man under their command visited me.”

Greed was the second most belligerent Deadly Sin, after Wrath. If someone introduced themselves as their cohort, it wouldn’t be strange for them to be captured.

“He was a pretty fast runner, you see. He said something about wanting to become one with me, so he probably chose not to move in large numbers to avoid the risk of causing trouble in the surroundings and being refused by me.”

“The thing about devils fusing to become more powerful, right? Is that something you can refuse? I thought it happened automatically when two devils were close enough.”

“It did before, but not anymore. Probably because we have stronger egos now. If our personalities are different enough, it’s like the stronger absorbs the weaker. Their level was higher, but I’ve been absorbing energy here, so our fighting strength is more or less the same. They probably judged that we could end up just going down together.”

If devils fused together, their max level was raised by 50. It was said that if all devils fused, the resulting level would reach 1000. In the game era, however, they were always exterminated before they could do that, so Shin had never witnessed it.

“So that’s why he thought of another strategy”

“We went down in the training dungeon today, and the rare monsters there were under Greed’s command. Here’s proof.”

Shin took out a 『Piece of Avarice』 from the item box and showed it to Luxuria.

“The dungeon…my detection range doesn’t reach there, so I never noticed. Thank you for taking care of it before something serious happened. I’m really grateful.”

“That was just a coincidence. Besided, if you weren’t here, Greed…no, Avaritia, right? It might have attacked this place. We could say that this city has been safe because of your presence. Having people I know here, I feel like I should thank you.”

If Luxuria had cooperated with Avaritia.

If Luxuria hadn’t come to Erkunt.

It was difficult to imagine that Avaritia would just ignore Erkunt. When Shin and Schnee arrived, they might have found nothing but ruins.

“My, if you wish to thank me, then tonight…”

Luxuria leaned over the table, looking deep into Shin’s eyes, when Schnee finally broke her silence, stopping the devil from finishing her sentence.

“Oh my, I do not mean to take him away, you know? I surely cannot do it by force, and charm doesn’t work either.” 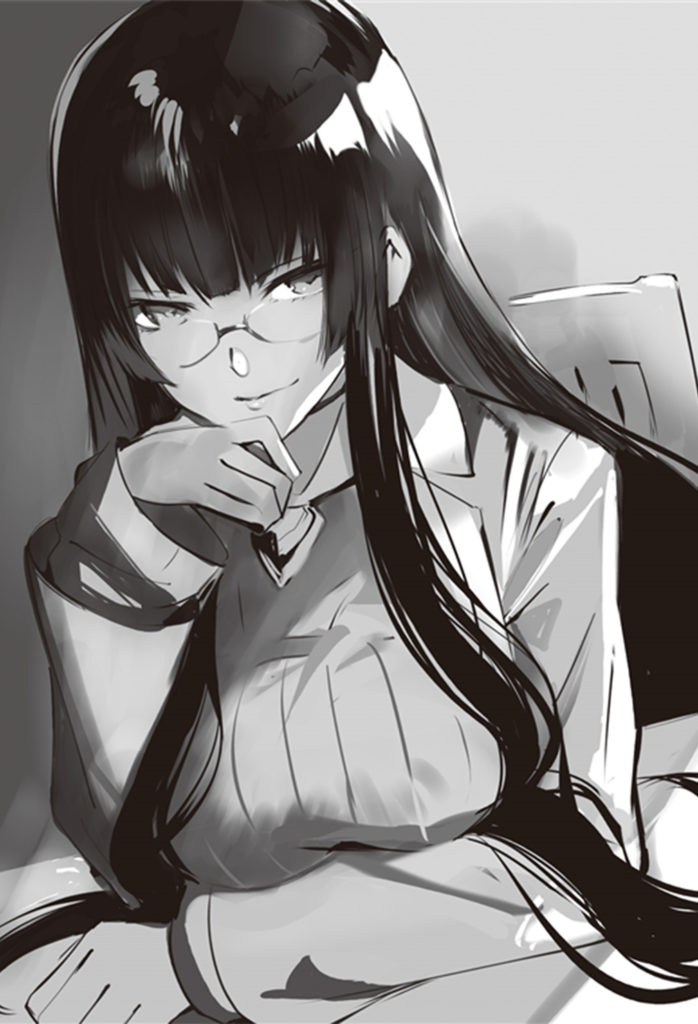 Schnee replied very sternly to Luxuria’s teasing tone. She grabbed Shin’s arm, pulling him towards her, glaring at Luxuria all the while.

“My my, please, do not be like that. Or could it be that you don’t have much confidence?”

“I will not allow any loveless acts.”

“If you keep chaining him like that he’ll end up hating you, you know? Can you really satisfy him, anyway? It doesn’t look you have much experience yet…”

Luxuria took advantage of this and slipped closer to Shin, grabbing his other arm. Her movement was far too smooth, considering she was sitting across the table. It was also probably on purpose that she locked Shin’s arm between her bountiful breasts.

“If you want, I can teach you. Doing it with three of us together might be nice once in a while.”

Luxuria possessed words and a body that would sway both men and women’s minds. Shin then told Schnee to let go of his arm.

Schnee looked tense, shocked by what she heard, but Shin smiled at her that it was all right. He then formed his hand into a knife-like shape and brought it down on Luxuria’s forehead.

The very subdued chop struck, forcing Luxuria to let go of Shin’s arm and hold her head in pain.

“I know you were joking, but you went too far.”

“You…could have crushed a normal person’s head with that…”

Luxuria was crouching, but as expected of a Deadly Sin devil, she hadn’t lost *too much* HP.

“If you looked for us to tease Schnee, then we’re going.”

“No, no, wait a moment. I’m sorry, I apologize, really! I still haven’t gotten to the main topic…”

Luxuria noticed that Shin was serious, so she hurriedly apologized.

“I can guess what that is, though. You want us to help take down Avaritia, right?”

“Correct. I bet you could defeat Avaritia with your little finger now. I’d like you to do it before it tries any other pranks.”

Shin argued that if Luxuria defeated Avaritia, she would gain a power boost, but she turned his proposal down.

“I have no intention of absorbing that thing. Besides, if it had already absorbed the others, I’d become the complete form, right? I’d lose myself in the end, so I’m never going to do that.”

Achieving the complete form was supposed to be any Deadly Sin devil’s ultimate wish, but Luxuria flatly discarded it.

“Don’t remind me, it’s troubling me too, you know.”

“You’re right. Okay, first we’ll investigate the surroundings and look for clues. I heard that monsters that never used to appear around here are increasing, so we’ll go searching around Erkunt, while training Lecus and the others too.”

“I heard about that too. It turns out the new monsters are a bit too much for average adventurers to handle too.”

According to Luxuria’s information, there were some monsters that surpassed level 150 as well. In Hinomoto they would get exterminated without trouble, but in Erkunt the average level was not as high, so there were more and more injured adventurers.

“I heard that the headmistress is going to address the monster issue during the next training session. I don’t think she’ll tell you to bring students with you though.”

“I planned to have them experience actual fighting soon, but if I tell her that they’d have to fight monsters stronger than usual she’ll probably worry. There’s no need to go look for trouble, after all.”

“But you’ll take them, right?”

“Yeah, they can handle it. Besides, it’s better for them to try actual fighting as soon as possible — a real battle, where the danger of death is very real.”

Shin would employ certain insurances, of course, but he would not tell the students about them. He didn’t want them to rely on Shin to rescue them every time something happened.

Shin knew of the institute’s policy, so there was the chance that they already experienced actual fighting before. New types of monsters had apparently showed up, though, so he thought that it would turn out to be a valuable experience either way.

“Those children have surely grown stronger.”

“We’ve put them through the wringer after all.”

“They often come to the infirmary for light injuries, so I’ve become pretty familiar with them.”

Luxuria spoke with a gentle, motherly smile, very unbecoming of a devil.

“Really, if you didn’t do things like just now, you wouldn’t look like a devil at all.”

“A good while has passed since I achieved human form, it would be a problem if I still looked like a devil. I don’t like the devil form either, it’s too stocky and snake-like. I wanted to look more sultry after all.”

Worrying about appearance was very human-like too.

“Well, this is nothing compared to the problem of Avaritia arriving. A complication could be that he feels your presence and leaves the area. I would run away instead of fighting too, honestly.”

If they fought head on, level 700 was far too low to stand against Shin and his party. Luxuria had also seen Shin’s anti-devil equipment, so she was even more wary.

“Even if we can resurrect, it’s not like we don’t have a sense of danger, you know? When we first met, you were really scary. I’d like you to know how nervous I was then.”

“Honest. Well, Wrath would fight all the same though. As far as I can remember, they cared more for fighting than surviving.”

There were clearly differences between each devil, but their basic characteristics hadn’t changed.

Among the devils that proactively interacted with people, Wrath and Greed were the most belligerent. The difference between them was that Wrath only dealt with people, while Greed attacked monsters too.

“In any case, we have to gather intel first. The headmistress and the others are moving too, but we haven’t found anything important yet. Anyone who was behind the dungeon incident isn’t around anymore too, I suppose. I’m counting on you two.”

“We’ll do what we can. Defeating Greed is important for us too after all.”

Shin and Luxuria then smiled at each other. She hoped for the town and its people’s safety, while he thought of weapons and obtaining items. Normally, someone would point out that their goals were completely different, but Schnee just shrugged as she looked at the two.