Wilhelm was an upper class Chosen One. It seemed impossible, but it was as if Eline knew what his next moves were. Eline’s face remained calm and composed. 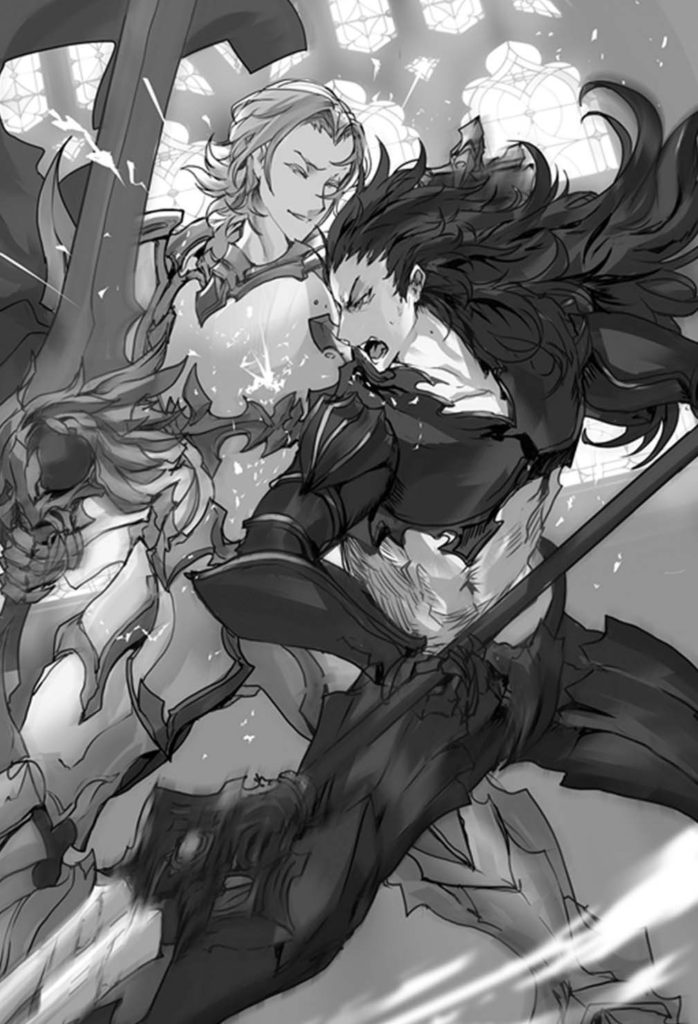 “I believe your spear is 《Legend》 grade, possibly 《Mythology》 grade. I’d love to have it in my collection.”

Wilhelm’s attacks became more heated. He didn’t skip a beat with his repeated strikes. You’d think that one hit would be able to pulverize a king class Skull Face.

Yet it was no match against Eline’s 『Exvaine』, or Eline himself. The fighter and the weapon that Wilhelm faced were the real deal.

“You’re as good as I’d heard. I wish that I had a little more speed on me. That’s the one weakness when it comes to equipping 『Exvaine』.”

It was frustrating how Eline wasn’t fully invested in the combat.

Wilhelm had to switch tactics. Rather than waste energy on the repeated blows, he had to take a single shot. He stepped back to squeeze more power into his hands that held 『Venom』. However, this caused him to stop moving momentarily.

Eline did not miss this chance.

He went from defense mode to attack mode, thrusting 『Exvaine』.

Wilhelm brought 『Venom』 in front of him to take the red blade on.

The sheer mass of it took Wilhelm by surprise. He had not anticipated its weight, having seen Eline lift it so easily. Regardless of what Eline had said about his own speed, he was faster and more agile than Wilhelm.

He was blown back and slammed against the wall. He could feel the air being forced out of his lungs, as he let out a yelp.

『Venom』 had saved Wilhelm by intercepting the thrust of his savage opponent. Still, the damage was sufficient to make Wilhelm drop 『Venom』.

『Venom』 lay there, with a crack in the center after clashing with the mighty 『Exvaine』.

“Oh dear. After looking around, I thought I’d finally found something that I liked. Now it’s damaged goods. I should have known it with a strong opponent like you.”

Eline looked down at the item and shook his head after heaving a sigh.

Maybe he was preoccupied with the weapon, but he didn’t seem to have a care in the world for Wilhelm, who was pushing the rubble off of himself.

“Oh. You’re fine the way you were. This spear is no good to me.”

“My client was looking for someone.”

“Yes. But we found the child. Oh, was this off record? My bad. It’s fine though, my role here is done.”

Wilhelm wondered if there was something wrong with the man standing there.

“I have to go now or I could get into trouble. I’d be happy if you could get your spear fixed, by the way.”

“Why don’t you tell me where you’re going too.”

“Sure. We’re headed to the church headquarter. Please come if you want. My name is Eline Sperizer. You should remember that.”

Then Eline turned and left.

No one could ever forget his grin of pure evil.

Eline disappeared, and Wilhelm groaned as he clutched his left abdomen in pain.

He knew that he had cracked a few ribs. On top of that, the fight had taken a tremendous toll on his body.

Wilhelm had fought quite a few battles until now, and he was in shock. He had only taken one hit, yet, he was in considerable agony.

Perhaps Eline was that skilled of a fighter, or his weapon was truly that potent. Regardless, that weapon was not normal.

He forced himself to step foot in the church.

Thoria should not be here today. Then it had to be Rashia who faced Eline.

He could smell the damp iron of blood. It was an eerie feeling for the scent to be wafting inside a house of God.

Wilhelm looked about frantically, before his eyes rested on Rashia on the floor, her back in a pool of blood.

This was enough to make him forget his own wounds.

Rashia was barely conscious, as she feebly called his name.

He took out a card from his Item Box.

It was a class 5 Potion – the highest-class antidote that Wilhelm had ever possessed. This should do the trick, even for wound like hers.

He had given the potion to her. Yet, the wound was not healing itself.

Wilhelm had not known. There was a restriction depending on the potion class. A class 5 Potion was only as effective as the healing abilities of the person in need of healing. Only at a class 4 Potion or higher could an item heal a wound and enhance a person’s vitality.

That level of recovery item was not available in any of the nearby markets. It was rare to even see a class 5 Potion; the recovery item Wilhelm had.

Wilhelm could see that it was of no use. He immediately reached for the message card in his Item Box. There wasn’t enough time to spare – not even to write to another for help.

He wrote to Shin that Rashia was stabbed.

She had very little time left in this world.

Wilhelm couldn’t help her. All he could do was pray to God that he’d get a response, and to try to stop the bleeding.

“I asked Shin for help. Just hold out a little longer.”

Rashia didn’t respond. She squeezed his hand and could barely get the words out.

I’m sorry. I couldn’t save Millie.

She was losing consciousness as she repeated this over and over.

He shouldn’t have lost his composure. He should have focused. He knew what he was up against. It didn’t help at all that he was hot in the head.

And he was even more helpless now.

A message appeared in front of Wilhelm. All that was written was “Use it.” Several item cards were also attached.

Every card had the same image. Wilhelm took one in his hand.

A long, thin glass jar appeared with a clear gold liquid inside.

Wilhelm had no idea what it was, but there was no time. He trusted Shin, and gave it to Rashia.

The results were astonishing.

The bleeding had stopped and the wound was closing in on itself. Her pale skin regained color. Her face had been the picture of agony. Now it was calm and soothed.

No one would have believed that she had been dying only a second ago. The only proof of the event was her torn clothes and the pool of drying blood.

Rashia was fully recovered. She seemed dazed, as she looked around.

She frantically questioned Wilhelm. Even if the stab wound was gone, it didn’t mean that she had recovered her stamina. She couldn’t muster any strength in her arms.

“She was gone by the time I got here.”

Rashia was losing her mind, and Wilhelm could only tell her the truth.

He was familiar with the presence of every orphan in the church. He could not feel that of Millie anywhere nearby.

“Stop crying and tell me what happened.”

Wilhelm was losing his patience, and Rashia looked up towards him.

“Of course, they said they’re headed back to the church headquarter. I doubt they’ll get right to the killing. I also told Shin.”

She nodded, as tears fell down her cheeks.

Millie was taken. But Wilhelm was right. Millie was still alive.

Millie was a friend. She was family.

If she needed help, they would help her.

A loud shout was heard from the steps of the church.

Wilhelm had managed to help Rashia sit in a chair. He turned to the source of the voice.

It was Shin. He had Yuzuha on his shoulders. Schnee and Tiera followed behind.

“I saw your message and sent you some items. Is Rashia…what is that blood?”

He was bewildered by the large, dark red spot by the alter. It had to be at least a mel in diameter.

He had only read the word ‘stabbed’. He had not anticipated that much blood loss from the message alone.

“You made it sound like she was just a little hurt. What in the world happened?”

Shin looked to see that Rashia was okay. Then he asked Wilhelm.

“You have to ask her for the details. All I know is this.”

“Millie was taken and Rashia was stabbed by an upper class Chosen One. He had an unusual weapon too.”

Shin held up 『Venom』, with a chip in it. The item’s durability was reduced by a third.

“One strike did this.”

“…I see. That means that this is no simple kidnapping.”

Shin thought about it. The weapon that was used against Wilhelm must be at least 《Mythology》 grade. It could also be 《Ancient》. Otherwise, 『Venom』 wouldn’t have become like this.

“Wil. Did you fight the blonde swordsman with the red sword?”

Rashia had been listening to the conversation.

“Yes. I know you’ve only just gotten up, but tell us what happened.”

Rashia tried her hardest to tell them without getting emotional.

“I see. Then Millie shouldn’t be in immediate danger. Father Bulk didn’t care about this church at all. He was after Millie the whole time.”

“They must be after Millie’s gift.”

Millie was a ‘Hoshiyomi’. She could predict the future. (T/N: Hoshiyomi or Star Reader)

“I know you already talked about this. This ‘Eline’…are you sure he called his weapon 『Exvaine』, and are you sure he said it was a ‘High Human’ weapon?”

Shin was more concerned with this than Millie after hearing Rashia finish telling them what had happened.

“Yes. The bracelet that I had received from you held him off until he used the red sword against me and the bracelet shattered. I believe Millie’s item only had a crack in it towards the end, but…”

Shin repeated her words in his mind. If he was right about his hunch, then Rashia’s item couldn’t have bought them any time at all.

Even Millie’s item would have broken eventually.

“No, it’s nothing. Don’t worry about Millie. Rashia, you need to rest now.”

Shin brushed off Rashia’s question, but she knew something was wrong.

It wasn’t possible for Rashia to understand, because she didn’t know he was a High Human.

Rashia looked dejected, but Wilhelm tried to reassure her.

“We’ll take over from now on. You have the other children here to protect. Tell Thoria to also be careful.”

“It really wasn’t your fault. You were up against some scary things. How could you have gone up against an opponent that even I couldn’t handle?”

Rashia had leveled up, but she was far from an upper class Chosen One. Even if she had fought normally, she couldn’t even have posed a threat against her foes.

Perhaps there was some saving grace to her leveling up though. Because of that, her blood loss was minimized. It wasn’t all hopeless.

If Rashia had died, Millie would have been devastated.

“You need to get better. For Millie.”

Shin who also joined the persuasion somehow managed to get Rashia to return to the orphanage.