Reito spent the night in Gollum Town before returning back to Faas Village on his wolf-cart.

Kotomin was waiting for him in the river. She greeted him dispassionately.

“I’m home… What’s this? Your clothes are really something today.”

“When I interact with humans, I always wear this kind of thing.”

Kotomin was not wearing her usual school swimsuit but something that exposed a lot more skin.

According to her, if mermaids didn’t wear light clothing, they wouldn’t be able to live. It was true that mermaids had to release the heat from their bodies. When she wore her water clothes made from special material, there wouldn’t be any body temperature-related problems. But, when she wore human clothing, it needed to be this kind of attire.

Having interacted with Kotomin, who had the body of a gravure model, in her swimsuit, Reito wasn’t sure where to look.

Reito received permission from Kotomin to check out her water clothes.

“What kind of material is this made from?”

“Water clothes are mainly made from the skin of water dragons. Those are hand-me-downs my mother gave me as a child, but they are a little tight on the chest.

“Right… Are you going to sell it in town?”

“They are a hot item so I can often sell them in human towns as well. But, they go for a high price so only aristocrats and wealthy people can purchase them.”

“I see… Maybe I can reproduce it with my 『Sewing』 skill.”

Something always happened to Kotomin whenever she went to town in that outfit. Reito was worried for her so he was trying to imagine if he could make some other clothing for her. It looked like it would be difficult.

“If these water clothes are so expensive, you wouldn’t own many pairs of them.”

“Yeah. When I don’t have money, I just have a slime camouflage as my clothing. If you befriend a slime, you can have them become your clothing for you.

Airis informed Reito, 『Slimes and mermaids have a symbiotic relationship. If you’re interested in slimes, shall I show you to their habitat?』

“That does interest me.”

Using Airis’s information, he headed toward the slime’s habitat.

Reito and crew got in the wolf-cart and crossed the grasslands in a straight line. There were pots stacked up with water in the back of the wolf-cart for Kotomin.

Reito watched his surroundings before communicating with Airis.

『Usually they live near water. They don’t harm people, but please treat them kindly when you catch one.』

After continuing for a while in their wolf-cart, they spotted a liquid creature near a river. There was only one such creature and it was bouncing around like a ball.

Reito asked Kotomin, “is that a slime? They are way cuter than I thought they’d be.”

“Try getting close to it.”

Reito got down from the wolf-cart and tried to not startle the slime while approaching it.

Apparently, the slime’s main diet is liquid, especially sweet liquids like honey. The two of them had nectar in their hands as they neared the slime.

Reito called out to the slime, trying to draw it in, “Here slimy, slimy! I have some sweet nectar for you!”

“Woah! It really says purupuru. It speaks in onomatopoeia!”

“Reito, slimes are smart. It knows what you’re saying.”

The slime shook its body as if to say “don’t compare me with goblins, fool”

Reito tenderly held out a cup with nectar. The slime drew near cautiously, drinking the liquid dripping off the side.

“Is it okay to touch? Will it melt my finger?”

“That should be no problem,” Kotomin said. But, Reito was still cautious as he touched the slime with his pointer finger. He continued touching it before picking it up.

“Hey! It’s not running away. Maybe it likes me?”

“It knows you’re not an enemy.”

Ullr was watching with great interest as Reito held the slime. When Reito noticed, he held out the slime. Ullr licked it.

“It seems to be ticklish,” Kotomin was translating for the slime.

“Does it have a sense of touch? Well, I guess it has intelligence so that would be no surprise. Ullr, this isn’t food, got it?”

Ullr had taken to the slime, burying his face into it.

The slime also appeared to like Ullr and he moved to his head. It could change form as needed, so it sprouted tentacles to avoid falling off Ullr’s head. It then transformed into a collar and fastened itself onto Ullr’s neck.

“We ought to give this slime a name. How about Suramin.”

Even though the name was decided without consultation, the slime shook happily.

Reito told Suramin his objective for the day.

“Suramin, you have camouflage abilities, right? You can become human clothing for Kotomin, right?”

Slimes have no battle capabilities but they do have camouflage ones. Mermaids make use of this ability and use them as close, wearing them on their bare skin. They also cool them down.

Suramin nodded his head and jumped onto Kotomin’s chest.

Kotomin held Suramin before it dissolved, enveloping her entire body.

“This is a rather intense sight.”

Reito was surprised before saying, “Hey! It really worked. Cool!”

“Oh, it can’t speak while in that state.”

She was in men’s clothing, but it was a very inconspicuous look. Even if she went into a human village, there wouldn’t be any trouble.

“Great, now we can be together, Reito.” 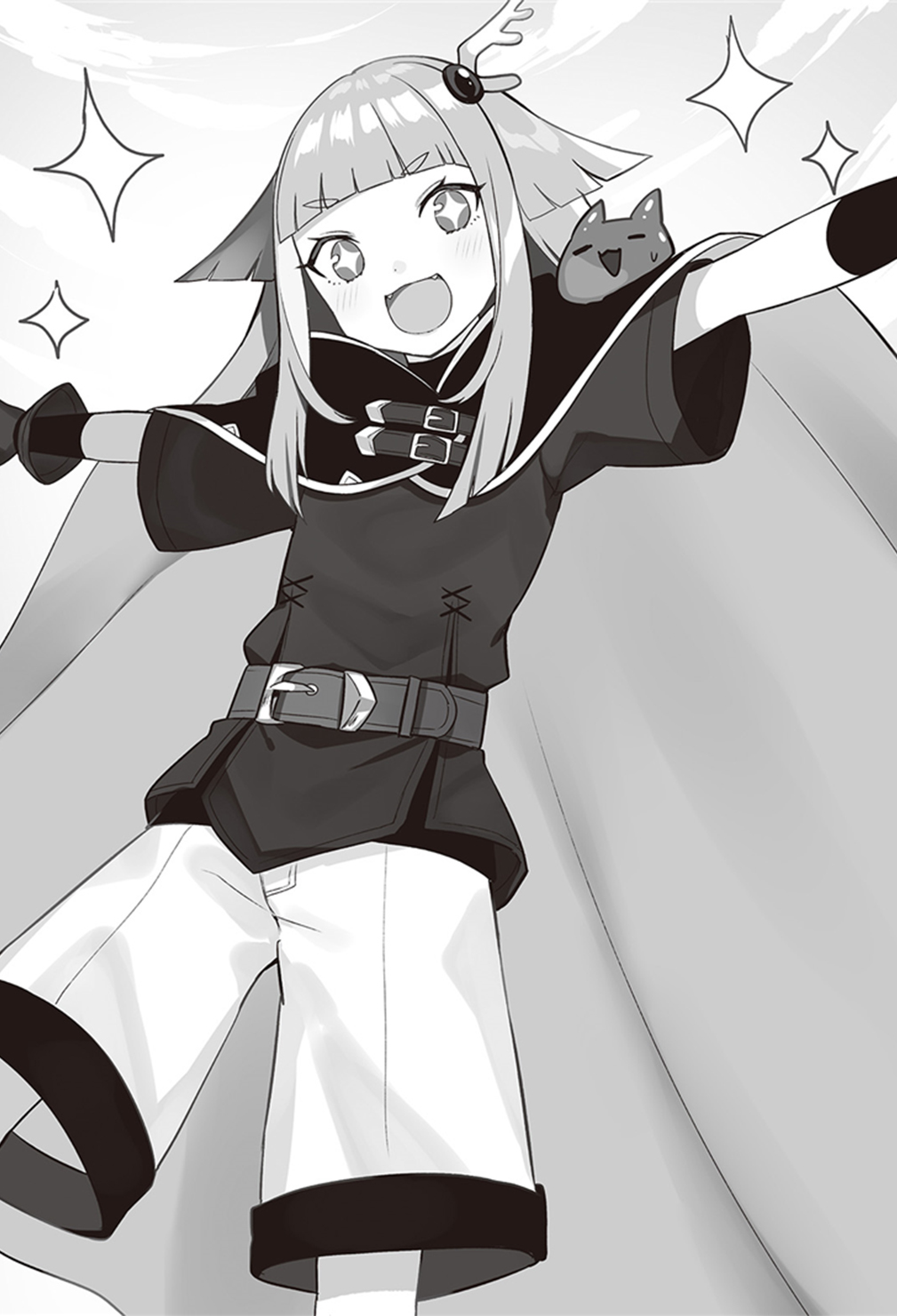 “Ah, but, in this state, how can we give nectar to Suramin? We can’t just splash it on my body.”

“Don’t worry, look at my shoulder.”

He found one part of the clothing had changed, with a tiny Suramin appearing there. He appeared to be riding on Kotomin’s shoulder but was actually just a piece of clothing turned back into a slime.

“So you can talk in this state. You also got even smaller.”

“We should be able to give it nectar in this state. Look, drink up!”

“Pururu,” the slime enjoyed the nectar and nodded its head in satisfaction.

Before long, it sprouted eyes and a mouth and looked like the mascot for a teenage witch character.

“They’re really cute. What else can it eat besides nectar?”

“You shouldn’t feed it too much. But, because of this little bud, my body is getting cooled off.”

“What’s wrong, Ullr. It’s not like you got replaced by Suramin.”

They had succeeded in domesticating the slime and so Reito and crew headed toward Faas Village in the wolf-cart.

Because slimes don’t harm humans and don’t cost anything to feed, they are popular as pets. Suramin was peacefully chirping out from Kotomin’s shoulder, “Pururu, pururun.”

“Reito, I’m going to work too. I’m going to raise this slime wonderfully,” Kotomin said as the wolf-cart rolled along.

“When you say work, do you mean to say you have a job?”

“I could work as a fisherman again. I used to catch fish and hand them over to the other fishermen. I’ve been mistaken as a fish and caught in nets two or three times by other fishermen before though.”

“That’s terrible! But, are you sure you’ll be alright working? It’s difficult for you to live on land, right?”

“If I’ve got this little bud, I’ll be fine. I can also use magic. Water spirit magic.”

When Reito heard the word “spirit magic” he remembered his infant care keeper, an elf named Aria. One day, when Reito had fallen off the roof, Aria used spirit magic to help him.

According to Kotomin, both mermaids and elves could use spirit magic just the same. In her case, she was good at magic that involved the handling of water.

“If I have water, I’ll be invincible. I can be useful.”

“Now that you mention it, do you have any other skills?”

“It’d be pretty fatal if you were bad at it as a mermaid.”

“My breasts are large.”

He was dumbfounded at Kotomin proudly proclaiming that with her chest puffed out. He was trying to think of a job she could do. Kotomin was the first girl he had become friends with in this world. He wanted to help her ambitions come true.

However, he wasn’t able to think of anything. He asked Kotomin, “What else can you do? Can you produce recovery medicines?”

“That’s not in my capabilities.”

“I see… seems like you being an adventurer was out of the question.”

He arrived in Faas Village without thinking of any good plan.