“You can get off me now, Suramin… Thank you.”

Suramin peeled off his face and went back into his breast pocket. Reito used his leap skill.

He was aiming for his home in Adventure City.

“What should I do when I get back?”

『Once you get home, get Ullr and the crew together then take them to the Guild. Keep Caledfwlch in a place that no one will notice it』

Reito followed Airis’s instructions and went home, where Ullr and the rest were waiting for him.

He ‘Leaped’ onto the roof and came back home.

Even though it was nighttime, it appeared a guest was there. There was a carriage parked in front of his house that he swore he had seen before. Reito thought it was strange before Tina came running along. 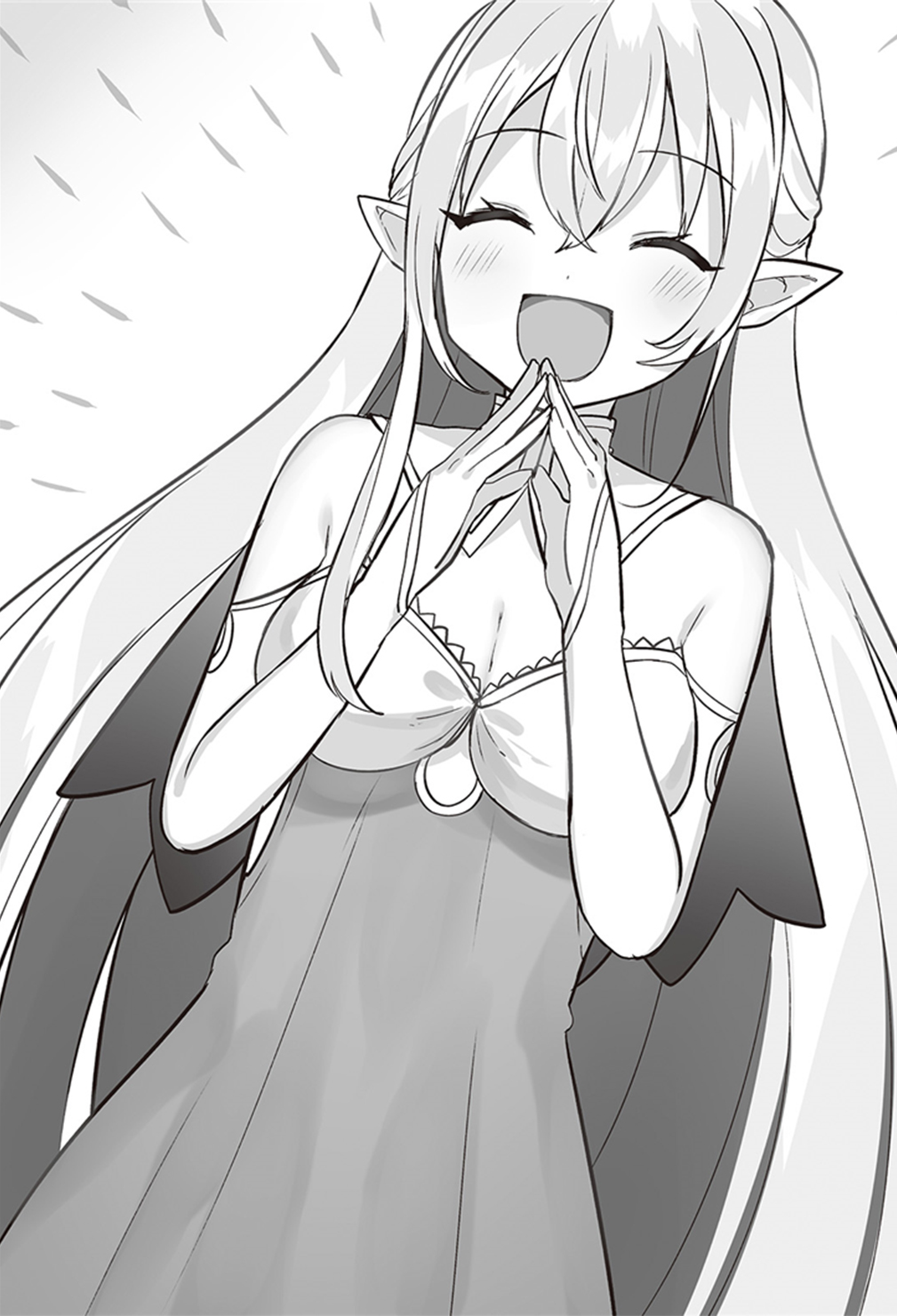 Behind Tina, there was Linda and her elf envoy.

“Linda sternly said, “Sorry to intrude on you so late at night… I’m glad to see you’re all right.”

Reito tilted his head to hear a commotion in the house. Before long, Ullr, the Cyclops, and Kotomin appeared.

“I heard your voice… You’re back.”

Reito smiled as they ran to his side.

The envoy was surprised at the sudden appearance of the giant monster. Tina ran up to Ullr and hugged him.

The guards were puzzled as she buried her face in Ullr’s fur.

The Cyclops was mystified seeing Tina. Before long, Tina noticed the cyclops.

She stepped away from Ullr and held out her hand.

Reito said the first thing that came to mind, but it appeared the Cyclops liked it.

Everyone was surprised that she knew the Cyclops was a girl.

Ain appeared to be interested in Tina because she approached her without reservation. She held her hand out to her and put Tina upon her shoulders.

“Princess, you mustn’t!! Even if you’re a monster controller, it’s too dangerous to interact with that kind of monster!!”

Tina responded to Reito’s question, nodding her head, all while being on Ain’s shoulders. Tina hugged Ain’s neck as she enjoyed the view from up there.

Reito looked at Tina and laughed before turning his head toward Linda.

“That being said, why are you at my house? Do you have something to do?”

“My sincerest apologies!! Raikofu got away”

According to her, Raikofu had run out of his single room with a band of other elves.

They visited him because they were afraid Raikofu might have attacked him.

“How did he get away? He was really injured…”

“Raikofu had been hiding recovery medicine on him. It is unknown why the guards cooperated with him, though…”

“So, are they chasing down Raikofu right now?”

“They’ve ordered some lower-level staff to search for him, but they still haven’t caught him. It’s as if he disappeared using some kind of transfer magic… Anyway, you seem to be unharmed. Let’s go back to the lodge.”

Linda gave a faint smile. Looking at the two girls being so carefree in light of the situation, he felt a little suspicious.

“Have you two not heard about the rotten dragon?”

As the Elves were nothing more than guests in Adventure City, it appeared that they hadn’t been informed of the situation to not stir up any trouble. Reito explained the chain of events to them.

“…So, a rotten dragon has come back to life?”

“What are you talking about?” Reito asked, listening to the Elves murmur amongst themselves. Linda looked at another member of the elf envoy. They gave the nod, and so Linda began to explain.

“Actually, that same type of rotten dragon appeared in our Kingdom before… Some forty years ago.”

“What… the rotten dragon did!?”

“We called it an Undead Dragon. Undead Dragons are just like the rotten dragon you talked about. They are born from the corpses of dead dragons.”

“…So, are they brought back to life by Necromancers?”

“I’m not sure. The Undead Dragon was active for three days. Still, it did little more than destroy a few trees in the forest before perishing naturally.”

“It perished so quickly? I thought it was some kind of legendary dragon.”

“When we caught the Necromancer controlling the Undead Dragon, he told us something. Undead Dragons can’t be fully controlled. The physical form of the Undead Dragon made an appearance, but it didn’t do anything. It just remained asleep in the forest.”

“I see. But, this rotten dragon attacked The Knights of Valkyria…” Reito said. Linda gave it some thought and then continued.

“Perhaps the Knights aggravated it in some way? There were some people who were attacked by the Undead Dragon who got too close to it. But, as a general rule, if we didn’t do anything to provoke first, it wouldn’t attack.”

If Linda’s story was true, the rotten dragon was nothing to fear.

Reito pondered on Linda’s story about the Zombie Dragon. Was it the same dragon?  The one he saw had caused some significant damage.

“Well, have you heard about the Zombie Dragon?”

“Yes, that’s the dragon that went around wrecking the human’s territory. I’ve even heard they destroyed a few towns, if I’m not mistaken…” Linda paused before continuing.

“That must have been quite the high-level Necromancer if they were able to control a dragon. However, no matter how talented the Necromancer is, controlling a dragon is going to be very taxing. In the past, Necromancers who have tried to control dragons have often withered away, unable to get the dragon to do anything. It’s really difficult to ‘use’ a dragon in that sense. Even if you are successful at first, there’s no way you’ll be able to control it for very long.”

“Furthermore, Undead Dragons hate sunlight. Therefore, I don’t think there’s anything to worry about in the daytime,” she added.

Reito voiced his concern to Linda, “But, that being said, we can’t be certain that the dragon won’t come and attack Adventure City.”

“From what you’ve told me, the place the rotten dragon manifested isn’t very far from Adventure City. The fact that it hasn’t come yet suggests the Necromancer doesn’t have full control at the current time.”

According to Linda’s theory, the rotten dragon was not any different from the one that appeared in the Four Leaves Kingdom long ago and was not a threat.

It was undoubtedly a convincing theory, but something was making Reito uneasy. Airis had told him that the Necromancer who brought the rotten dragon back to life was quite the talent.”

Reito decided to communicate with her.

『 That’s the name you gave the cyclops. I suppose the ‘a’ and the ‘i’ are the same… Anyway, I assume you want to hear about the behavior of the rotten dragon.』

『The rotten dragon is going to attack the city. There’s no doubt about that. The Necromancer, Aira, is just holding its movements back.』

『Ugh, that name!! It always makes me think of my mother. Is there any other name for her?』

『You could call her ‘Kirau.’ She hates that name, but a lot of underworld humans call her that.』

From that moment on, the Necromancer in question came to be known as “Kirau.”

『That’s right. To tell the full story, Kirau is an assassin hired by the Empire. The Empire is well aware that it’s cornered and is going through various strategies. The rotten dragon is the last resort solution for them. To that end, they have hired the vilest murderer of the underworld — the Empire prepared the rotten dragon for Kirau.』

『Well, that’s horrible… What is she up to right now?』

『Even if she is the strongest Necromancer in the world, it takes quite a lot of time to be able to completely control a dragon. I don’t think she’ll be able to take action for the moment. I would say we have a few days of leeway.』

『If we can’t think of a plan by then, the city will be destroyed… By the way, what are the odds that the rotten dragon is going to head for the Royal Capital?』

『If you mean to go and attack there first, zero. She is going to attack Adventure City first and then the Royal Capital second. To make matters worse, the city is about to see some rain and cloud coverage soon. The rain will start falling, and the sunlight will be blocked.』

Things were proceeding in the enemy’s favor.

In that case, Reito would need to get the Holy Sword back in commission immediately.

『I think you already know. You need to make repairing Caledfwlch your first priority. With your current abilities, you can temporarily fix it. Still, there’s no option but to entrust it to a skilled blacksmith. Also, perhaps we should ask for Tina and company’s cooperation.』

『If the rotten dragon comes and attacks, there’s no way they will be safe. We should use the authority of the Elvish kingdom to get the Baltros Kingdom to dispatch their military. If they learn that their princess might pass away in the borders of another kingdom, it would be a diplomatic nightmare they would want to avoid. For example, if things go poorly, a war might break out with the Elves.』

『Let me tell you… Repeat the following words to them, exactly: Bla bla bla.』