Reito watched as Tina and company departed. He looked at the junior members of the envoy left behind and told them what they were about to do.

“Sir Reito, I apologize, but would you be so kind as to let us separate?”

It appeared the girls had some affair to attend to.

“Actually, we have something to do related to the Raikofu incident… There’s a hunch we’d like to follow. I know we’ve been asked to be your guard, but if you wouldn’t mind…”

“Um, I’m not particularly concerned. But, will you be all right? What if Raikofu attacks?”

“That two-year-old couldn’t put a hand on us.”

“Just to be safe, we will leave one member with you. Erina, say hello!” the guard said, and one cheerful young girl came forward.

There was a familiar-looking black magic stone embedded in it. Reito recognized it as the Storage Stone that Gonzo had.

Erina puffed out her chest and bragged, “My bow is too big, so I hide it in my bracelet for convenience sake. I might look real manly, but I’m also quite good at household chores. If you’re ever hungry, give me a call. I can even make pastries!!”

“I’ll have to ask you to make Ullr some smoked orc and Poark.”

“Sorry, but Elves are vegetarians, so I can only cook with vegetables.”

“I’m a pescatarian myself,” interrupted Kotomin.

“Oh, you are? Guess I’ll just have to cook for myself!”

Erina and Kotomin continued talking as Reito looked at the other Elves. They were already preparing to leave.

They gave Reito a nod.

Reito asked Airis where Raikofu was just to be safe. Before he could tell the Elves, he heard a sudden bark from Ullr.

Reito lowered his head just in time before an arrow went soaring over it.

Everyone dropped their jaws in surprise.

He had been hiding somewhere, waiting for just the right time to snipe.

Reito held Kotomin in his arms and looked for him. He wanted to activate his Magic Ring’s Barrier Stone. He asked Ullr, “Do you know where the enemy is?”

Ullr whimpered. He was a wild animal with acute senses. But that didn’t mean he would be able to pin down the enemy’s location.

“No good, huh? Guess there’s nothing to do about it. Let me borrow your chest.”

“Wow, you’re being rather forward.”

Reito buried his face in her chest.

The skill polished the other four senses besides sight so that he could detect what was surrounding him using his mind. Kotomin’s large breasts perfectly cut off his field of vision, and as a result, his abilities were greatly amplified. After a few seconds, Reito released his “Mind’s Eye.”

The enemy was not within 100 meters of them. In other words, they had fired the arrow from somewhere even further than that.

One member of the envoy took the arrow in his hand and said, “So it was Raikofu’s arrow.”

“When us Elves make arrows, we add a personal mark somewhere on it. Raikofu’s mark is on this arrow. He tried to snipe you from somewhere.”

“Judging from the direction the arrow was fired, can you tell where he is?”

“Raikofu has a skill called ‘Leaping Bullet.’ It lets him change the trajectory of the object he’s using to harm. It’s a skill passed down through the generations in the Midori Household. It has enabled them to bring home great victories at the Hunting Festival.”

“That’s quite the pain in the ass…”

Reito was still trying to scope out Raikofu’s position from Kotomin’s breasts. Erina called out to him, “Bro, I got this.”

“You can just call me Erina. I have a skill known as ‘Sure Shot.’”

Airis explained to Reito, 『It enables the shot to follow through and reach its target with high accuracy. It’s a rare skill that’s like an upgraded version of your sniping skill.』

Erina drew her bow from the bracelet.

“That’s no ordinary bow and arrow. That’s a bonafide crossbow!”

Erina didn’t just pull out a standard bow and arrow but an enormous crossbow that looked like it could shoot down a giant monster.

She loaded the arrow into the crossbow and scoped out her surroundings. There was a faint glimmer in her eyes. Reito watched, curious.

“Are your eyes glimmering? Or am I crazy? Are you going to shoot a beam out of your eyes?”

“What, are you Dracule Mihawk?” Reito said before Airis explained.

『Don’t be silly! “Hawkeye” is not the name of the world’s greatest swordsman… It’s a skill that only Elves can remember. It combines Observing Eye and Far Sight. Far Sight works like a pair of binoculars, magnifying things in the distance. Conversely, Hawkeye draws the objects in, allowing for closer inspection.』

“What! I want that too. I should’ve been born an elf,” Reito mumbled before Erina scoped out the situation.

Erina had her crossbow at the ready as she looked out at her surroundings. She seemed to notice something coming in front of her.

“I found ’im!! Look at the chimney 200 meters in the distance. Raikofu is there!!

“He’s hiding right now and looking at us. The second that he shows his face, I’m gonna fire.”

“But, what about the other Elves? Isn’t there somebody who helped him escape?”

『Those people ran away. They saw who Raikofu really was and abandoned him. They probably went off to tell his parents about him.』

“He really is an unpopular guy…”

“What should I do? Should I shoot? I could shoot his body that’s sticking out from the chimney.”

An older elf pointed that fact out to her, making her realize that she had loaded a poisoned arrow for hunting magical beasts in her crossbow.

The moment she released the bow, Reito screamed.

Erina noticed Raikofu ready his bow. But, she was not able to reload hers before he had fired.

Arrows fired by Elves fly at the speed of bullets.

Erina saw the arrow approach her head and realized she had been shot.

“Oh, I’m gonna die,” she said, giving her last words. Often right before you die, things move slowly, and that’s how she felt as the arrow approached her.

But, before she was shot, the arrow was intercepted by a silver saber. The arrow fell to the ground.

Erina screamed in surprise, but Reito, with his Extermination Blade in hand, was facing forward.

He couldn’t use a bow as well as her, but he did learn the “Sniping” skill in his younger days. He used Ice Block.

“This should work… Erina, pitch this to me.”

Reito produced an ice ball the size of a baseball and handed it to Erina.

“What, this? I’m not sure what you’re going for, but I’ll play along?”

Erina hesitated as she put the ice ball in her hand. Reito readied his saber.

She was skeptical about everything he did, but she followed his instructions and pitched it at him. Reito gave a big swing with his sword as if it were a baseball bat.

Airis made fun of him as Reito hit the ball. The ice ball went flying at a ferocious speed and hit Raikofu right on the head.

Raikofu was in agony as he was blown away.

Raikofu’s scream rang out as he fell off the building.

This was Reito’s long-distance attack born out of his sniping skills. He didn’t have a name for it. But it was an attack he had often used to escape the Forest of the Abyss. 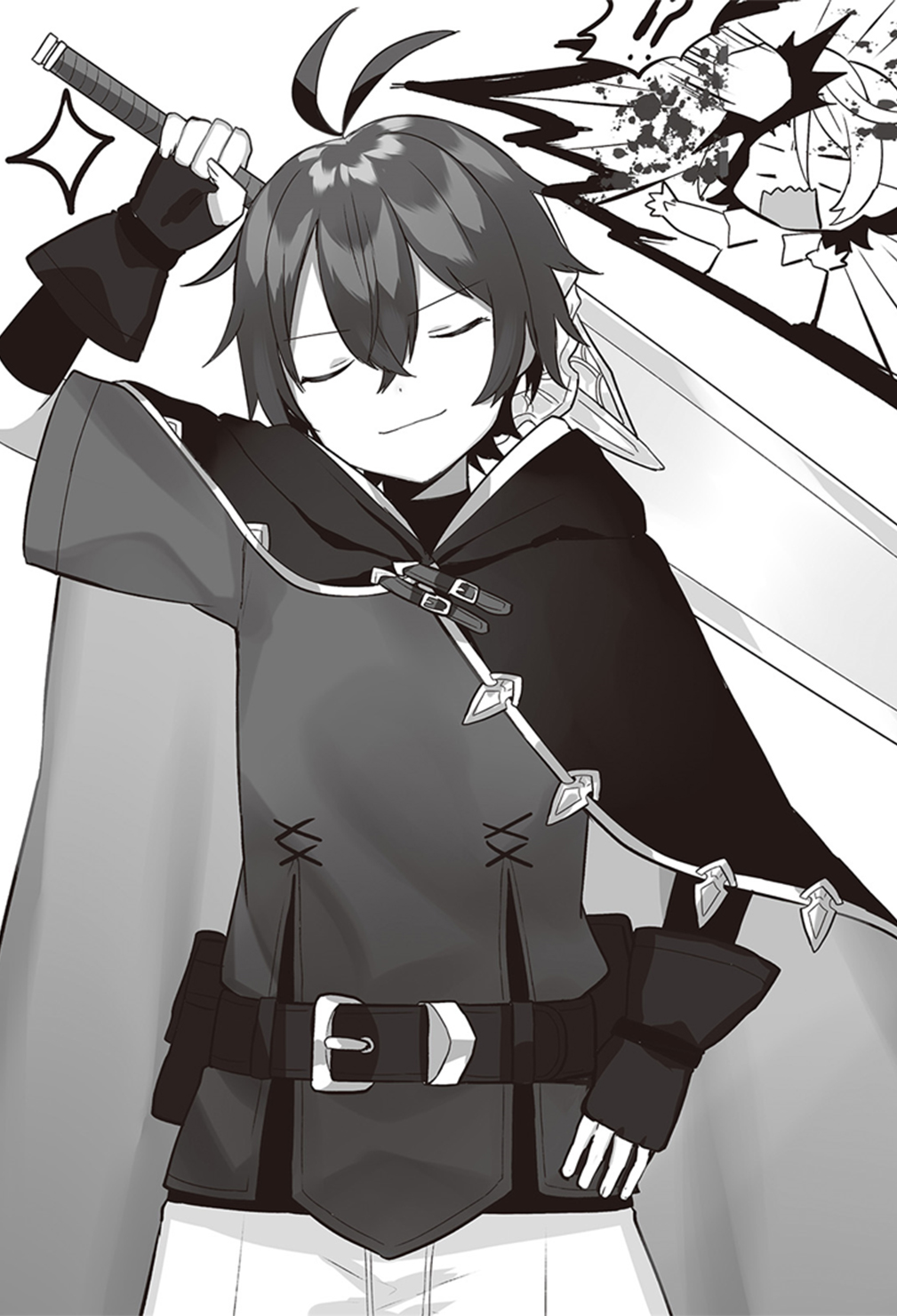 Reito and crew had managed to turn the tables on Raikofu.

The Elves who had gone to apprehend Raikofu had returned and offered him to Reito.

He was unable to resist as he was all tied up and his mouth was sealed shut as well. Raikofu glared at Reito with disgust.

“Calm down, Ullr. He can’t do anything.”

Erina smiled as she called out to Reito, “That was really cool! I wanted to save the day. Little did I know that I’d be the one getting saved.”

Raikofu was being supported by the Elves. If Linda was here, she would have given him quite the beating.

Raikofu had no remorse in his expression as Reito grabbed his hand.

Raikofu had a suspicious expression on his face as Reito grabbed Raikofu’s head and used “Wind Pressure.”

Then he mimicked Linda’s “Fa Jin” skill to attack him using wind power.

Reito was disappointed at the name the system gave it.

Raikofu was wriggling in agony as the other Elves held him.

“Sir Reito, he is one of our own. If you would only spare his life?”

“Don’t worry, I’m not going to kill him. What are you going to do with him, though?”

“As long as he is in the city, we will keep him in our custody. We will leave Erina behind as a guard. If you have any errands, please make use of her.”

“I promise to try harder!! I wasn’t of much use earlier, but I’ll do better next time!!”

Reito couldn’t entirely reject the Elves’ offer, so Kotomin and Erina ended up being the ones to accompany Reito. As far as guards go, just Ullr would have done the job, but he would need more hands to put up a fight against the rotten dragon. Reito accepted their help.

“In that case, we are going back to the lodge. We will report to you if anything happens. Look out for us…”

“Ugugug!!” Raikofu was beginning to lose consciousness as the Elves carried him on their shoulders.

Kotomin and Reito looked back to watch them walk away. He gave the splinter Suramin back to her.

Erina was so surprised at the sight of it.

After the commotion over the rotten dragon, Reito decided to go home and take a nap.

“Um… Is anyone going to explain this lady’s clothes to me?”

“My name is Kotomin, and this is Suramin.”

“Uh, how do you do… You have similar names. Are you siblings?”

“What kind of reasoning is that… So, you’re fond of me, Suramin? You rascal!”

A tiny Suramin appeared on Kotomin’s shoulders. Erina was shaken. She greeted Suramin.

“Are you joking? What should I do? Should I join?”

“Do as you please, good night!”

Kotomin sneaked into bed with Reito. Erina was contemplating what to do before Reito had fallen fast asleep.

When Reito woke up, it was noon.

Something boisterous was going on outside. He was annoyed the moment he got out of bed.

He found Erina and Kotomin drooling without care beside him.